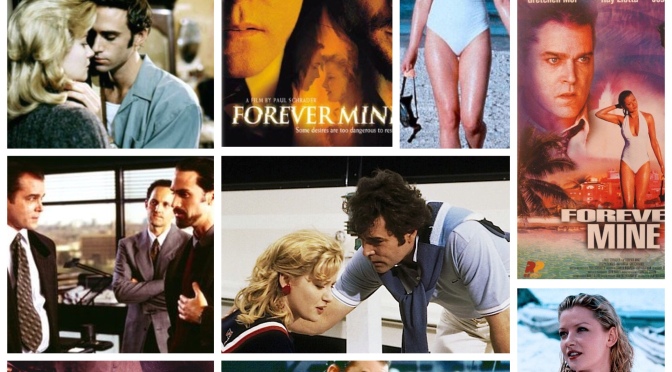 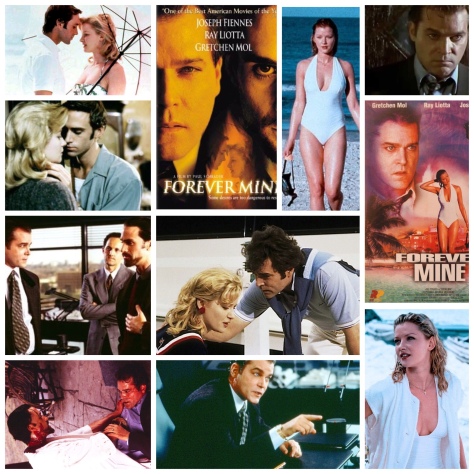 Paul Schrader’s Forever Mine is a melodramatic romantic revenge thriller that never truly coalesces into something great, but has elements which work nicely. We get two really great lead performances from Gretchen Mol and Ray Liotta, and one from Joseph Fiennes that isn’t as committed, or maybe it’s just that I’m not a fan of his and always feel that he’s mis-casted. Fiennes is the cabana boy working the beaches who falls in love with Mol, the much younger wife of Liotta’s shady, volatile politician. Jealousy roars into play, violence rears it’s head and tragedy looms when the affair becomes a full blown love triangle. Liotta is a dangerous man with powerful friends and he soon fixes it so the two of them can never see each other again, on top of having him viciously scarred. Flash forward a decade or so, Fiennes has become something of a shady businessman himself, and has returned seeking payback on ol’ angry Liotta. The one giant misstep in the script here is assuming that no one would recognize him simply because he’s become rich, cultured and suave, I mean it’s still the exact same guy in the flesh, Liotta and his ilk seem to buy the ruse, but it just doesn’t sell. It’s all very mirthless and operatic, so much so that it reminds me of Tony Scott’s Revenge which is the ultimate noir soap opera, but it works here and there. Liotta and Mol simmer off the screen but like I said above, Fiennes is just an awkward foot and doesn’t seem to work for me wherever I see him. The film’s strongest point lies in its last sixty seconds or so, when the whole thing wraps up in a melancholic vignette of tandem narration from him and Mol, a beautifully spoken and edited sequence that’s brief but truly affecting, poetic and heartbreaking. A so-so film. 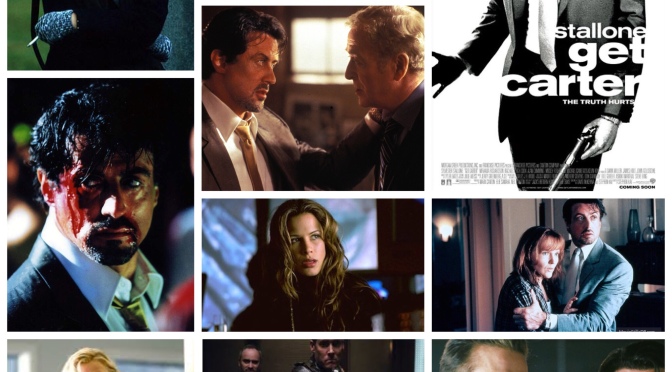 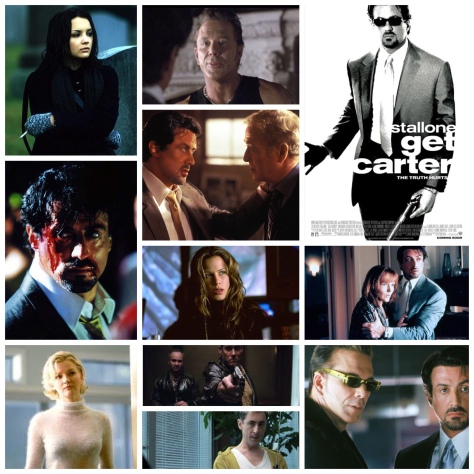 As far as the remaking of cult classics, Stephen Kay’s Get Carter is a piss poor effort, so much so that not even a positively stacked cast could do much of anything about it. The original saw fearsome bulldog Michael Caine getting shotgun fuelled revenge and has since become iconic, while this one switches up rainy Britain for rainy Seattle and a sedated Sylvester Stallone in a shiny suit takes over as Carter, a mob enforcer who hails from Vegas but has travelled north both to escape scandal and look into a shady family matter. There he finds all sorts of characters played by a troupe of big names, character actors and even Caine himself in an extended cameo as a bar owner, but it all feels lazy, listless and flung about like a ball of yarn full of loose plot threads and scenes that fizzle. It’s obvious that there were major editing problems here as the pacing is in conniptions and an entire subplot involving a love interest back in Vegas (Gretchen Mol) has been slashed to ribbons. So sloppy was the final product that my college acting teacher, who landed the role of Carter’s gangster boss back in Vegas, although mentioned brazenly in the opening credits, can only be seen briefly from the neck down and heard on the phone, except for whatever reason they decided to dub his voice over with an uncredited Tom Sizemore, which is just so bizarre. Anywho, Stallone sleepwalks his way through a local conspiracy involving his dead brother, the widow (Rachel Leigh Cook), a mysterious femme fatale (Rhona Mitra), a weaselly computer tycoon (Alan Cumming) a sleazy pimp/porn baron (Mickey Rourke) and more. It’s just all so terminally boring though, and none of the clues or twists spring to life or feel organic at all. Rourke provides some of the only life the film has to offer as the villain, a guttural scumbag who has two painful looking nightclub boxing beatdowns with Stallone which are fun. John C. McGinley raises the pulse somewhat as a lively Vegas thug dispatched by Sizemore’s voice to bring Stallone back to face the music. Others show up including Miranda Richardson, Mark Boone Jr., John Cassini, Johnny Strong, Frank Stallone, Tyler Labine and more. None of it amounts to much though and by the time the anticlimactic plot resolutions arrive and Carter jumps a red eye back to Vegas before the credits roll, you wonder what the point of it all was and want your hour and forty minutes back. A thorough bummer. 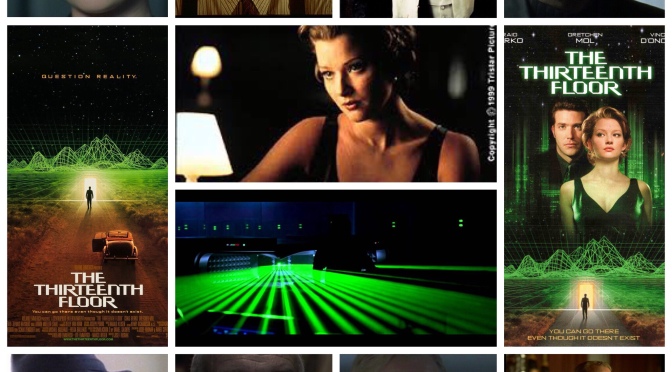 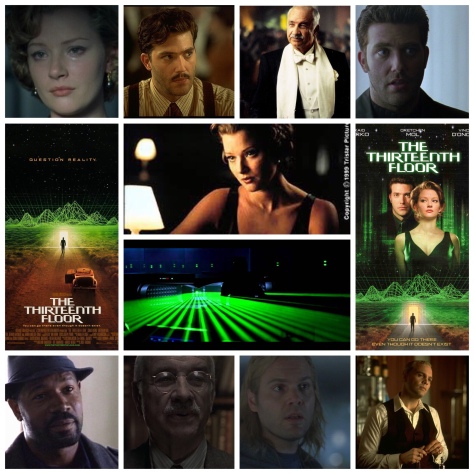 Are you into science fiction infused with film noir? Do you enjoy films like Blade Runner, The Matrix, Inception, Dark City and Source Code? Well, Joseph Rusnak’s The Thirteenth Floor isn’t quite as good as those, but it’s still a welcome addition into stylized 90’s high concept tech retro futurism, given the darkly lit flair of a noir mood-scape. Somewhere in the naughty 90’s, the head scientist (Armin Mueller Stahl) at a research firm has discovered that his advanced software project works a bit too well, and that he’s created a living, breathing virtual reality zone of 1937 Los Angeles where there are consequences to actions and the simulations living there have a rebellious nature. After his untimely murder by an unseen hand, his protege and fellow researcher (Craig Bierko, who does alright but always seems a bit miscast and aloof here) is drawn into a trippy web of intrigue, forced to make the journey into the simulation and search for clues in a hazy, sepia toned LA of the 30’s. Vincent D’Onofrio does double duties as another scientist and a dodgy bartender inside the simulation. Complete with the bumbling, Stetson sporting detective (Dennis Haysbert) and the mysterious, angelic femme fatale (Gretchen Mol), this strives hard to be noir and genuinely does invoke the right feeling, from the feverish, atmospheric lighting of 90’s LA to the production design of the 30’s. Sometimes the muddled elements of romance seem a bit misplaced and awkward, as do a few story elements here and there, but when it works it really works, weaving a thoughtful, twisty narrative that arrives at a reasonably mind blowing conclusion, asking questions about the nature of reality, blurring the lines between soul and software in the best ways. This has been eclipsed by other similar films from that decade, and fair enough as they are admittedly more competent, but I still feel like this is a forgotten gem of sorts and really deserves some love from fans of the several genres it’s composed of. Fun stuff. 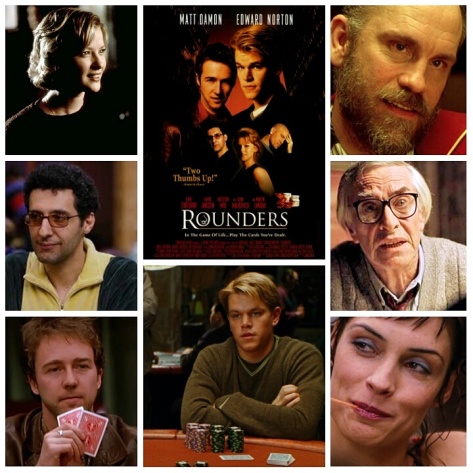 John Dahl’s Rounders is the premier poker movie, an utterly charming, never too serious and surprisingly slight look at the lives of several very different individuals whose lives revolve around the game in New York City. The main focus lands on two young men who are fast friends, yet reside on somewhat opposite sides of the responsibility coin. Poker prodigy Mike (Matt Damon) has since given up his art after a soul crushing loss to local russian bigwig Teddy KGB (John Malkovich). He’s content to simmer in solitude with his perky girlfriend (Gretchen Mol, who never fails to convince me that she’s Samantha Mathis until I double check on imdb). Right in time to disrupt his quiet life is cocky street rat Worm (Edward Norton), fresh out of prison and looking for the type of trouble that landed him there in the first place. It’s to long before he’s racked up some serious debt to dangerous people with ties to Teddy KGB, and Mike is forced to come out of retirement and risk everything he has once again, this time for his friend. The poker scenes are staged with meticulous eye for detail and mannerisms in attempt to put you at the same table as the players, and it’s nifty to see each acting style played to the microscopic hilt as Dahl maintains patient focus on his work. Norton is appropriately scuzzy with just a dollop of endearing, scrappy charm and Damon fills the protagonist’s shoes very well. It’s Malkovich, however, who pulls the stops out and is my favourite character of the piece. With a muddy russian accent that rivals his french one from Johnny English, a lazily snarky streak with just a hint of intimidation and a bag of oreos at his side without fail, he’s a hoot, holler and a half as the life of the poker party. Sexy Famke Janssen has as great bit as as shady chick with eyes for Damon and connections with dodgy folks, expertly playing the half sweet and seductive, half menacing game. Watch for topnotch work from John Turturro, Josh Pais, Michael Rispoli, Josh Mostel, Adam Lefevre, David Zayas, Goran Visjnic, Lenny Clarke and Martin Landau in an earnest turn as a kindly professor who looks out for Mike. It’s short, sweet, concisely paced, tightly written, flawlessly acted and wonderfully entertaining stuff.