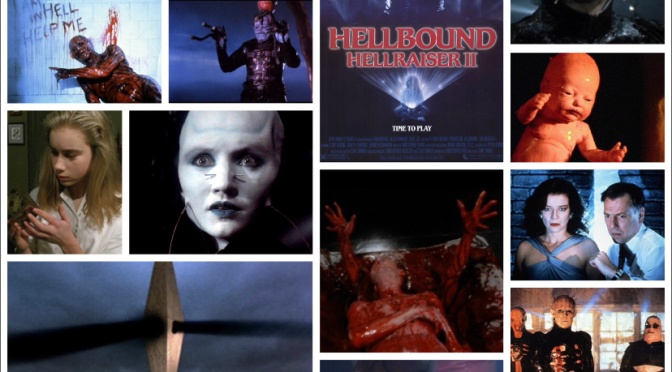 So what can be said about Hellbound: Hellraiser II.. well for starters it’s so fucking off the map crazy that it makes the first film look like a modest teaser trailer. It’s like they gathered up the entire collective special effects team employed by Hollywood in the 80’s, turned them upside down to see what shook loose and the result was this bonkers, smor-gore-sbord of a flick.

In the first film the Cenobites and all manner of pandemonium they brought with them were largely limited to the confines of one very haunted house, where they tormented the humans within. This time we follow what’s left of these people, namely Kirsty (Ashley Lawrence) as she ventures into the hellish realm that these things come from and… well it’s quite a wild ride. After finding herself in an asylum run by a mad doctor (Kenneth Cranham) who gets a little too curious with that ol’ Rubik’s cube, she gets sucked into a portal and spit out onto a vast labyrinthine plane of pure evil, and that’s pretty much all there is for story. Oh and some neato backstory elements to the Cenobites that show they weren’t always supernatural dominatrix freaks, I liked that touch.

Honestly I preferred this over the first one simply for the level of ambition and sheer lunacy thrown at it and it’s ability to (mostly) hold up a coherent story throughout the din. Setting the story within the dimension of hell itself allows for so many more effects, cues, scares and opens up the tableaux much wider. Also, this picks up pretty much right where the first left off and as such we’re plopped down right in the mayhem whereas the first took some time and held back while lore was established. Sound, fury, gore and momentum propel this onto a level that is impressive even in the land of bonkers 80’s horror sequels. The loony surgeon whose fault the horrors are this time around gets a grisly Pokémon type evolution that has to be seen to be believed, not to mention a metropolis of stone catacombs where anything can happen, a Cenobite vs Cenobite Mortal Kombat death match and some weird sentient floating monolith thing that hovers over the land and looks down like Sauron’s eye. That isn’t even to mention the hundreds of gallons of blood, guts, pus, fake tissue, gristle and glorious glistening body horror on display. A true step up from the first and one hell of a twisted flick.