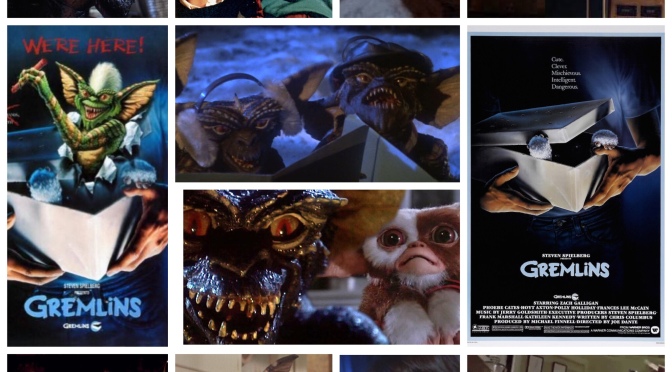 I’d forgotten that Joe Dante’s Gremlins balances creature feature, slapstick comedy, charming holiday movie and outright horror flick so expertly, but it’s a delicious mix that makes for one of the most timeless fantasy films out there. Director Dante is an expert on all things 80’, gooey and larger than life, this being his flagship film of sorts, the one gemstone in a career full of mischievous monsters and supernatural moonshines. Gremlins is an ‘inmates running the asylum’ formula, distilled into the simple premise of little renegade monsters loose about a small town during Christmas. After a wacky inventor (Hoyt Axton, like John Goodman by way of John Candy) buys an adorable Furby looking thing from the back end of Chinatown, things get nuts when he gives it to his son (Zach Galligan). The rules are don’t get the little tyke wet or feed him after midnight, which of course are promptly disobeyed, causing a full on invasion of little green scaly caffeinated crackhead monsters. It’s funny because as playful and charming as most of the film’s vibe is, these creatures are actually straight up down to kill people and cause maximum destruction, a violent atmosphere that hilariously clashes with the benign, Fisher Price motifs also on display. The special effects are gloriously 80’s, tactile and practical to their bones, every grisly gremlin death a symphony of slime and projectile ooze to be savoured, if that’s your thing. The Yuletide setting is perfect for such mayhem, the increasingly dastardly antics of these little fuckers acting as a sly metaphor for the feverish, stressful hoops and hangups we all deal with over the Christmas season, whether it be bustling through a crowded mall last minute or shredding a midget goblin in a whirring magic bullet blender, anyone would be hard pressed to decide which would be more intense. The score from Jerry Goldsmith is cheeky, catchy and has an off kilter Danny Elfman vibe, perfect for the madcap, demented story onscreen. A holiday classic and then some, fuel for anyone who gets a few drinks in them over Christmas and gets bitten by the rowdy big until they’re swinging from the chandeliers throwing plates at people. The sequel, also helmed by Dante, is a lot of fun in it’s own high tech way, but nothing beats the first high flying outing, and plus it’s a Christmas movie to. Good,