I applaud anyone who makes their way on this crusade, some might say foolish crusade, to make a film. It can be a long, arduous, laborious. And thinking on that word laborious, now consider making a film that has to be stitched together using over 7 million photographs with animation techniques pioneered by Walt Disney on Snow White and the Seven Dwarves. No CGI. And I know that sounds sacrilegious in this day and age where a film without CGI is like a day without sunshine.

However, the film that Stephen van Vuuren has, albeit laboriously, constructed In Saturn’s Rings, is a unique master-work that is as beautiful and immersive on the small screen I watched it on as I can imagine it being played in its large format form.

Sparked by Cassini‘s arrival at Saturn in 2004 and the media’s lack of coverage, van Vuuren produced two films. Photos from space missions — including images of Saturn taken by Cassini — were included. But van Vuuren was not satisfied with the results so he did not release them. 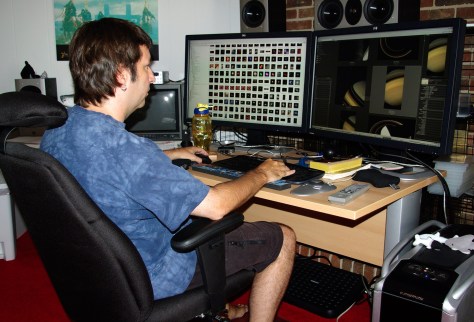 While listening to the Adagio for Strings by Samuel Barber one day in 2006, van Vuuren conceived the idea of creating moving images of Saturn based on a pan-and-scan 2.5-D effect. The technique involves creating a 3-D perspective using still photographs.

After discussion with audiences at IMAX conferences, van Vuuren decided the film title Outside In (the title of the short version) was not a good match for the film’s sensibility. The Giant Film Cinema Association had been publicising the film and surveys it conducted supported this. It was during a discussion in 2012 about the film’s climax where he was describing Earth “in Saturn’s rings” that van Vuuren realized he had found his new title.

Although narration had originally been removed in 2009, by 2014 van Vuuren realized that a sparse narration was necessary for the film. This amounted to 5 pages and about 1200 words in total. After listening to many voice actors one stood out and he asked LeVar Burton (Star Trek: The Next Generation) to be the narrator for the film.

The culmination of these elements, plus a lot of hard work, has resulted in something that is essentially more than a film. Like Kubrick’s 2001 which inspired him, van Vuuren has crafted an experience of what it may by like to drift through the far reaches of space to the planet that has always been the physical embodiment of his childhood fantasies. And I for one am grateful he stuck to his guns and made a movie that, even though it’s not a tale from a galaxy far, far away, it is the universe at its most wondrous…