I didn’t expect to be saying this but Ari Aster’s Midsommar is, for the most part, a colossal waste of time and talent. It sucks to have to bash this given my level of anticipation for a follow up to Hereditary which is one of the most effectively terrifying films I’ve ever seen, but this thing not only pales in comparison but just kind of cavorts about in broad daylight for an excessively bloated runtime, provides *no* effective scares and then just… ends.

The most successful and engaging scenes show up in the first ten minutes of the film: after a harrowing tragedy that wipes out the family of Dani (Florence Pugh), the camera swoops through an open window to observe a snowy winter landscape while the minimalist opening credits appear, accented by an eerie score. It’s a haunting prologue that sets atmosphere and tone like nobody’s business… and then the resulting film falls flat on its inbred face. This thing was marketed more aggressively than the super bowl so by now you know the drill: Dani is accompanying her neglectful boyfriend (Jack Reynor) to a remote Swedish commune where one of their friends has ancestral roots. They aim to study these amiable pagan bumpkins for an anthropological thesis but it soon turns out they’re anything but amiable and in fact they’ve wandered into a freaky occult ritual as unwilling participants.

So, what works here? The beautifully off kilter score, for one. The cinematography, fascinating production design and undeniably striking artistry in costumes are all wonderful on their own terms. Pugh’s performance is deeply felt when the script allows for it to develop properly, but see that brings me to the fucking many things that don’t work. The film is two and a half hours long which it just absolutely doesn’t need to be, and for most of that time we’re forced to watch this ridiculous group of insane loonies and their absurd customs play out for so long that any semblance of story gets lost in maypole dancing, sustained singing and all manner of ritualistic bullshit. Here’s the thing with Hereditary versus this film: in the former, real life trauma was used to gild and intertwine with the esoteric external threat for an oppressive, unbearably down to earth yet somehow also otherworldly experience, both sides of the coin proving effective as all hell. With this film the grounded trauma is shown early on and then cheerfully abandoned for a flower adorned theme park ride of empty, hollow Wicker Man shenanigans that don’t address, conjure up or call back to our protagonist’s trauma in any way whatsoever, and that is key in this film’s resounding failure. Dani has been through the kind of event (I won’t spoil it) that is so horrific and traumatic that it either drives a person mad, to suicide or in some cases births the kind of resilience so that they may rise above it, gain strength and unlock a new facet of their being. This film allows her none of that, betraying a real, tangible story for something lost up in the clouds doing its own dumb dumb thing for goddamn forever until you just want to call in an air strike on the whole commune and firebomb this dreary set of non-events from existence. What. A. Mess.

In closing I’d like to recommend a far better pagan folk horror tale that has more torque under its hood than this turd: Gareth Evans’s Apostle, a frightening tale of another outsider finding madness in a small occult community, you’ll be glad you chose that over Midsommar’s ingratiating lack of focus or vision. 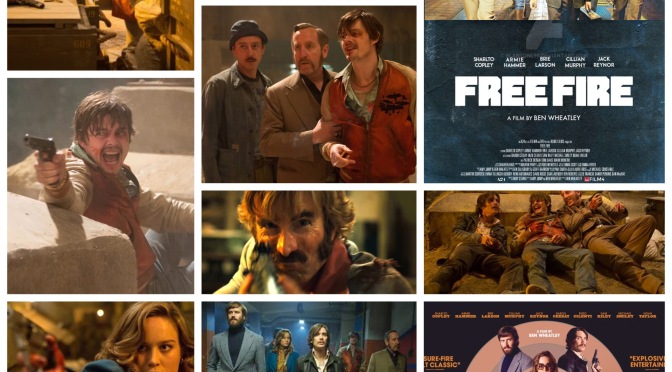 How many shady, degenerate 70’s era Boston lowlifes does it take to screw in a lightbulb? Doesn’t matter, they’re too busy shooting at each other, the lightbulbs and everything that moves in Ben Wheatley’s Free Fire, the best film of the year so far. After an arms deal gone royally wrong, we get to spend a joyous, breezy hour and a half watching these halfwit scumbags blast each other to kingdom come in a not so abandoned warehouse, unfolding in real time and at a pace that has our pulses racing faster than the magazine clips can defecate shell casings. Wheatley’s output hasn’t been my cup of tea so far, but he’s won me over with this lighthearted, ballistic mini-masterpiece. It’s what I call a ‘low concept high concept’ flick, which I’m sure someone has said before, but suck it. A bunch of childish idiots in a roomful of heavy artillery, the bullets are bound to soon be flying as fast as the dry insults. The deal is simple: meet, sell a bunch of rifles to help the IRA cause, and be on their way. That’s not to be the case though, for as soon as one of them recognizes another party’s member from a violent scuffle prior, tensions mount until that first shot rings out. From there on in it’s a ‘childish game of paintball’ (to quote a friend) that escalates into a deafening fire fight filled with acidic humour and John Denver music, a hilariously counterintuitive soundtrack choice. Armie Hammer is priceless as Ord, cool as a cucumber and constantly lighting up joints mid-gunplay. Sharlto Cooley chews scenery as Vern, the preening peacock of the group, Brie Larson kicks ass and takes names, Cillian Murphy underplays the IRA consort while Michael Smiley, the butt of the geriatric jokes, gets in everyone’s face even before things go south. Patrick Bergin, Babou Ceesay, Noah Taylor, Enzo Cilenti and Jack Reynor also get their licks, but the performance of the film goes to Sam Riley, a criminally overlooked talent who’s been laying somewhat low recently. His character Stevo is indirectly the reason for all this mayhem, and he’s a walking disaster, the sleaziest little reprobate you can imagine. Riley plays him balls out and doesn’t hold back, I really wish we saw more of him in films these days. All of these bozos positively ventilate each other with bullets, no one not sustaining at least two or three gunshot wounds somewhere on their body, and once the Reservoir Dogs esque conclusion rolls around, we know that few will be left standing. Clocking in at a rapid fire ninety minutes, this is surefire entertainment for not only action fans, but anyone who loves movies, it’s a perfect example of the reason I go to the theatre. Cheerfully violent, casually profane and hysterically unapologetic. Just the way I like em’.