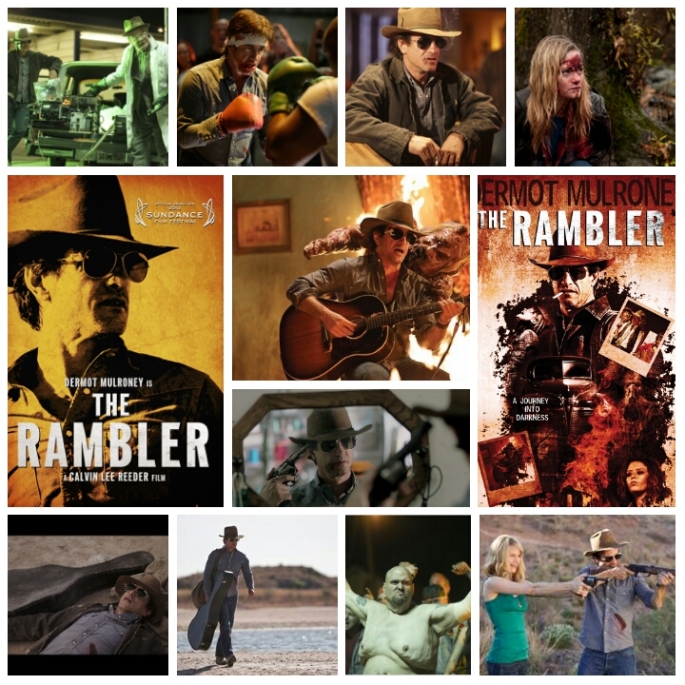 I can’t picture a single festival screening of Calvin Reeder’s The Rambler that wouldn’t result in at least half the crowd walking out in revulsion. There’s just no way to put it lightly when describing the alienating, severely soul-disturbing kind of sickly atmosphere that hangs over the entire film like a radioactive blanket of surreal dread. The dvd cover barely suggests the beyond Lynchian, out to lunch, bugfuck nuts events which unfold, and instead hints toward a western with vaguely horror themed aspects. Couldn’t be more different than that. The conventional elements like plot and the theme of Western are dimly present, shaky railroad tracks for a train that careens straight into the subconscious of bizarro world, some of what we see even too messed up and disassociate for the hardiest of cultist buffs. Few films are able to capture the purely illogical and disjointed feeling of a dream, but this one nails it scarily well. Sentences don’t match responses, human behaviour is terrifyingly devoid of inhibitions, events repeat and come out of nowhere, and we really and truly feel lost, removed and detached from any kind of rational thought or action. Now the film doesn’t outright announce that it’s all a dream, save for a few hints embedded in the story, but it sure felt like one long nightmare to me, evoking psychological feelings which words really can’t describe. Dermot Mulroney does a ‘Man with no name routine’ as a vacant ex con who is released from prison and blows back into his one horse trailer park town. He does indeed have no name, now that I think of it, and is only ever referred to as The Rambler. Upon returning, he finds his volatile girlfriend (Natasha Lyonne) has taken up with another man, and no one seems to want him around anymore. Time to hit the road, he figures, sauntering out into the acrid desolation of the southwest in a dead cool opening credits scene set to Terry Allen’s Red Bird, one of my favourite twangy tunes. From there it gets hard to describe, comprehend and stomach. He’s off in some John Waters style twilight zone of very unsettling characters, saying and doing things that make little sense and get increasingly shocking and vulgar. A mysterious girl (Lindsay Pulsipher) weaves in and out of the story and seems to be the only one besides him who is remotely coherent. A crackpot doctor (James Cady) shows him an extremely defective device that is supposed to look into people’s dreams. There’s ugly, misanthropic fiends running all about with nothing to say other than loosely strung together verbal diarrhea, and a constant nauseating film of unease over everything. I’ve read reviews wailing about how this film has less than nothing to say, and should have shut it’s mouth. But that’s the point to a nightmare; it doesn’t teach, enlighten or otherwise change us in any way other than to give our sense of dread a workout and provoke a cold sweat. Similarly, the film simply is there to scare, to induce the gag reflex and doesn’t strive for anything else, and in that sense it’s pure, primal and honest about it’s intentions. The very definition of not for everyone, this will even put off bands of counter culture cinephiles who scoff at anything mainstream. Deliberatly vile, constantly off its rocker and so far beyond the event horizon where bizarre ends and something truly indescribable begins, The Rambler will shake the shit out of anyone who claims to have seen it all. You have been warned.