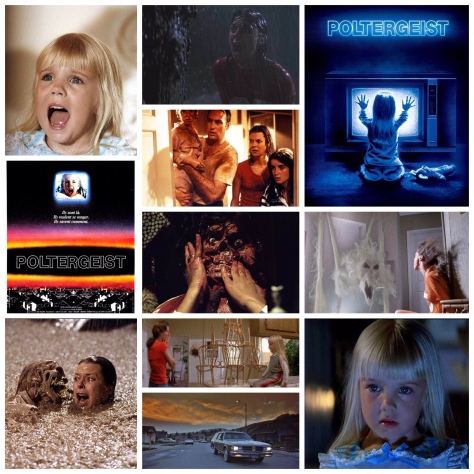 Tobe Hooper’s Poltergeist actually feels like a total joint venture between him and producer Steven Spielberg, because there’s as much whimsical Amblin style as there is gooey horror and supernatural chills. I saw the film for the first time ever last night and enjoyed it spectacularly, it’s a visually impressive, supremely spooky haunted house ride that showcases some brilliant practical effects, but what I liked most was the family dynamic between Heather O’ Rourke, Craig T. Nelson, Dominique Dunne, Olivier Robbins and JoBeth Williams. You really get the sense that this family loves, cares and protects each other, and the devastation felt by all when malevolent forces kidnap poor Heather through the television into the astral plane feels earned and palpable. Ironically that onscreen bond makes it all the more tragic that both O’Rourke and Dunne lost their real lives some years later after completing two more Poltergeist films, which some attribute to a curse directly related to the films but is most likely just life being a bitch as usual. Anyways, this film is a keeper and at least the two of them will always live on in cinema. The effects here are really varied and diverse, from corpses bubbling up from a muddy swimming pool to tree coming alive, but my favourites has to be the weird spindly spider ghost thing that materializes at the top of the staircase and hovers like an emaciated spectre. You can tell The Duffer Brothers took more than a few inspirational cues from this one for Stranger Things, their tunnel to the upside down looks almost identical to the gooey wall orifice used here. Jerry Goldsmith’s score is appropriately jumpy and jittery, especially great in the extended prologue that sets up impending disaster while quaintly showing lazy Sunday life in suburbia with a nostalgic flavour. Sometimes there’s a little too much commotion and chaos, like later on when a weird midget clairvoyant (Zelda Rubinstein seems like the Oompa Loompa who left the factory and made it big in Hollywood) shows up and there’s a lot of yelling, whooshing and noise where there could have been more quiet hallways and suspense, but it’s all good. This one is a treat and I see why it has become timeless.. I’ll weigh in on the sequels when I get around to them.