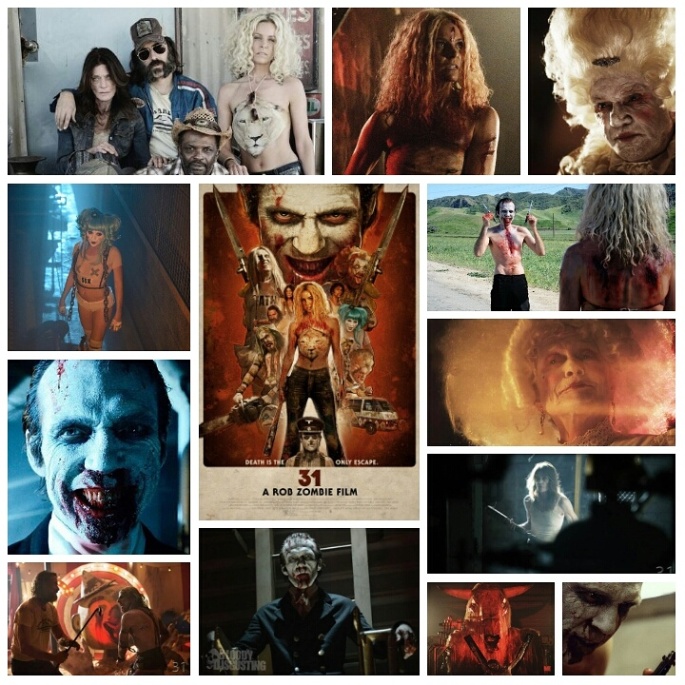 I couldn’t help but feel fairly underwhelmed and a bit let down by Rob Zombie’s 31, which is a reaction I never thought I’d have to a film from one of the most dedicated and talented artists working in the horror genre these days.

Now I’m not saying saying I hated it or even really disliked the film, there’s actually a lot of incredibly creative visual material and good old fashioned practical effects to feast your fangoria loving eyes on, but the fact remains that Zombie has regressed to the primal state he opened up his first few films with.

There’s two phases of his work so far: a rip snortin’ hoo rah gross out redneck scumbucket pile of profanity and bottom feeding trailer trash human garbage, which is what we saw in The Devil’s Rejects, House Of 1000 Corpses and somewhat in Halloween. Then there’s quieter, more thoughtful and meditative Zombie, using an art house, Argento psychedelic slow burn template that he brought hints of to the table in the excellent Halloween II and then full force with The Lords Of Salem, which to me is his best film so far. Now I love the trailer trash aesthetic to bits. It’s mile zero, the genesis of his fascinating career so far, and his writing is detailed, character driven, lifelike and oh so hilarious. But there’s a natural progression to any filmmaker’s career, moods and states which ebb and flow into new regions of stylistic exploration, and 31 just feels like a detour down the wrong road. I expected the atmosphere we got with Salem to churn forward and be a leg on the table of whichever phase came next. But alas, he has done a willful throwback to his earlier work, and although solid (I believe he’s incapable of making a truly bad film, there’s just too much creative juice with him), it’s sadly the least memorable among even phase 1 of his work.

31 is essentially a variation on The Most Dangerous Game, with a dirty dustbowl setting thrown in. A group of potty mouthed carnies, including Meg Foster, Jeff Daniel Philips and the ever present Sheri Moon Zombie, trundle through the desert, reveling in promiscuity and lewd behaviour, another trope that is getting old and icky, even on Rob’s barometer. Attacked and kidnapped one night by a band of scarecrows, they find themselves unwitting contestants in a vicious game called 31 (why is it called that? I still don’t know), on Halloween eve. The masterminds are a group of creepy aristocrats led by a plummy Judy Geeson and Malcolm McDowell, sporting a powdered wig, attire of french royalty and going by the name Father Murder. They release Moon and her peeps into a dismal maze and set a group of demented cackling psychopaths called the “heads” after them, dressed like clowns and seriously adjusted I’ll adjusted, these folks. Now you’d think that premise would be just a bucket of horror fun, and it’s nominally entertaining but just never really takes off into the desperate, visceral fight for survival I wanted to see. The clowns are varying degrees of scary and amusing. EG Daily fares well as whiny creepshow Sex Head, and there’s Sick Head, a chatty midget dressed up like Hitler who yowls at his prey in garbled Hispanic incantations. The film’s real energy shows up in the form of Richard Brake as Doom Head, a repellant maniac who is the only actual scary one of the bunch. Brake is a criminally underrated actor who I had the honour of interviewing some months ago, and when asked what the favorite role of his career is so far, he promptly said this. One can see why, it’s the most he’s ever been given to do in a film and he milks it with virile ferocity and animalistic sleaze that will leave you crying in the shower. McDowell and his cronies are here and there, but feel oddly disconnected from the events at hand, and while visually ravishing, ultimately aren’t given much to work with. I will say though that Zombie has a flair for the musical finale, and the end sequence set to ‘Dream On’ here is a blast that does indeed touch the epic heights of his older films.

And there you have it, kids. I wanted to rave about this one, I really did. But it use felt loose,

cobbled together and nowhere near as cohesive and brutally mesmerizing as his earlier work, all of which still hold up. There are elements here that work, but unfortunately just not enough, and framed by a whole lot of choices that feel copied and pasted. Now Zombie at his worst is still better than most in this sagging genre these days, but for those of you who know his work well and have expectations for the guy, you may just feel a little let down, like I did.