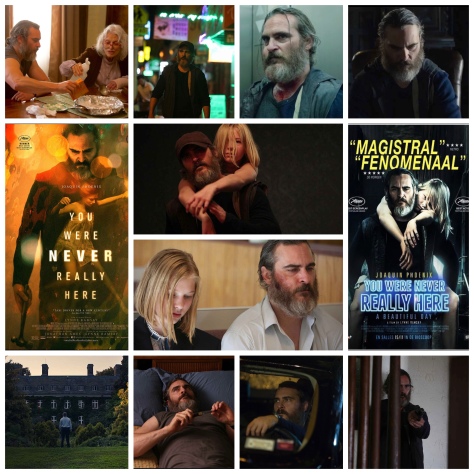 It’s amazing to think of the impact felt by a film that runs just under ninety minutes, but Lynne Ramsay’s You Were Never Really Here lands with force like that of the hammer that Joaquin Phoenix wields here, the violence mostly implied and hardly seen. Right off the bat though: this is not your average vigilante revenge thriller. It isn’t even your average artsy psychological character study. Ramsay is a careful, precise and challenging filmmaker who doesn’t often take on projects (this is only her fourth feature in two decades) and the story she brings here is full of shadows, provocations, shades of grey, unreliable memories, contains a cubist narrative sensibility and is altogether something of a masterpiece. Phoenix gives a coiled, implosive, miraculous performance as Joe, a veteran and abuse victim suffering intensely from PTSD who works as an off the books contract killer to locate missing girls. Hired by his handler (John Doman) to find the daughter of a senator who has been taken, Joe’s mind-scape and internal climate start to clash with what’s going on around him until memory, reality and action start to blur. This is a complex, difficult film and I’ve read many wild interpretations on what’s actually going on, but Ramsay keeps it refreshingly opaque, leaving our intuitions to decide what happened. Ghosts from the past, violent encounters with disturbing individuals, the eventual rescue and protection of the senator’s daughter (Ekaterina Samsonov), caring for his elderly, unstable mother (Judith Roberts) and uncovering an unsettling conspiracy. It’s all there, but none of it is in plain daylight and the pieces are carefully scrambled to mirror Joe’s disintegrating psyche. We’ll probably never really know what was real and what wasn’t, but that’s not the point anyways, the point is that we feel Joe’s journey deeply, personally, viscerally and that is the genius of both Ramsay’s vision and Phoenix’s performance. The atmosphere is further thickened with a resplendent, layered original score from Radiohead’s Jonny Greenwood, who uses a varied kaleidoscope of auditory work to let us see through Joe’s eyes. Not a film to be missed.