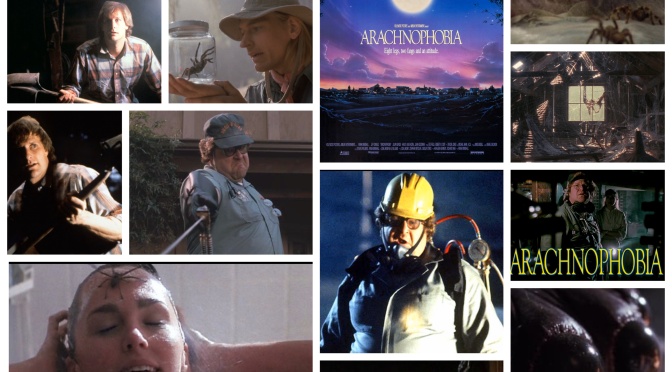 Scared of spiders? This is the perfect movie for you and no it’s not Eight Legged Freaks. Seriously though if you’re one of those people who are mortally, terminally and irrationally afraid of them then Arachnophobia will flare up just that kind of reaction. It’s produced by Spielberg too so it has that special kind of ‘menace in 80’s suburbia’ feel, this isn’t some cobwebby haunted house or fearsome jungle setting, this is killer spiders in the small town California which is all the more disarming. There is a jungle set prologue though because we gotta see just how these things did make it to Cali and you can thank scientist Julian Sands for that when he accidentally lets a breed of deadly arachnids hitch a lift in a coffin back to the states. There they slowly but surely begin to breed and wreak havoc on unsuspecting townsfolk until they’re basically everywhere. Jeff Daniels steps in for hero duty as a doctor who just moved into town and is getting a pretty suspect first impression of the area thanks to these creatures. It’s up to him and an intrepid posse to take them on while evading their deadly bites in the process. John Goodman shows up and steals the film as a boisterous, beer swilling exterminator who knows a maximum threat when he sees one and breaks out the non FDA approved methods for dispatching them. His character provides the film with levity and laughs as a kind of cross between Chris Walken’s kooky exterminator in Mouse Hunt and one of the Ghostbusters. This film is actually terrifying because it isn’t just giant spiders like in Harry Potter or The Hobbit and they’re not CGI or schlocky like countless other horror films, there’s actual craft and artistry put in and they use real spiders too so it’s pretty gnarly. There’s one scene where Daniels and his family are in the middle of the living room and there’s spiders literally everywhere.. the couch, ceiling, walls, appliances, floor… covered. We all know that feeling of seeing just one of them somewhere over in a corner, now amplify that by like a thousand. Yeah. It’s a great fright flick that never gets too gooey or gory and always maintains humour amidst the horror.

Upon my first ever viewing (I know) of Mike Figgis’s Leaving Las Vegas last night, I discovered that it’s not the film I thought it was all these years. I had an image of a quirky, star crossed lovers tale with a modicum of sweetness. What I got wasn’t insanely far off the mark, but I have to say I was disarmed and deeply affected by the sense of decaying bitterness which prevails throughout the story and hangs over it like the sour, neon stained moon over a feverish, perpetually nocturnal Vegas. Every character besides the two leads sort of flits dimly in and out of the story, never having any impact further than they need to service the plot with. This leaves Nicolas Cage and Elizabeth Shue eerily alienated and gives the movie a hypnotic flair. Even though these two abide in a bustling setting, it oddly seems at times that they are the only two human beings in existence. That also most likely stems from the film’s willingness to take the time to get to know them, lingering on every glance, murmur and mannerism, be it mundane or essential, to try and get a feel for these two completely broken souls. Cage is Ben, a failing Hollywood screenwriter who is quite literally drowning in alcoholism, plagued by some tragic past of which we never learn about. He is fired and splits for Vegas to hole up in a motel and deliberatly drink himself to death. There he meets Sera (Shue) a hooker with a heart of gold (Shue torches the cliche bravely). They are immediately attracted, and begin a relationship.  She continues to see Johns, after being freed of her sadistic Latvian pimp (Julian Sands, terrifying). He makes her promise to not attempt to stop his drinking. Their romance is born out of the primal lonliness that each human being feels to a certain extent, that instinctual urge to reach out and grab for anything, anyone to put out the pain. Cage is everything in the role: pathetic, charming, sad, manic, desperate and deeply, scarily committed to his lethal quest of inebriation. The scenes of liquor consumption in this film go beyond excess and make Denzel in Flight look like a high schooler. It will make many uncomfortable, but looking away for our own peace of mind takes away from the urgency and dark poetry of Cage’s situation. Booze is a low burn, but it’s still suicide, and an agonizing method for anyone to behold in action: the person has an extended period of time to rethink, reevaluate, and if they don’t, then their resolve is extended and far more disturbing than a split second decision. Cage displays this in harrowing form in a career highlight. Elizabeth Shue is heartbreaking as the girl who loves him but can’t quite say why, a girl who has spent years in loveless copulation, confused and torn upon feeling it for the first time. Her character goes through some truly hellish things here. You will cry for her, fall in love with her alongside Cage and swell with admiration at her steely resilience in the face of some of the ugliest things life has to offer her. Each member of the supporting cast is like a star in the desert sky, a moment of flickering purpouse before fading into the background again to let Cage and Shue continue their dance of the damned. Graham Beckel as a shaken bartender, Xander Berkeley as a cynical cab driver, Valeria Golino as as a Barfly and R. Lee Ermey as a taken aback conventioneer are all perfect. Director Mike Figgis composed the score himself, a moody blues melody that clings to your perception after the film like a dream that won’t let go. Just to make the film more haunting, it’s based on a novel by a severely alcoholic writer who took his own life two weeks after production was underway, furthering the disconcerting vibe to a saturation point. This one is a tough watch, and you’ll be forced to see two human beings at the absolute end of the road, miles past rock bottom with seemingly no hope in sight. And yet, if you are patient and try to empathize, you will see the kind of flickering positivity and briefly life -affirming intimacy and light that humans cling to even in the darkest of times. Cage and Shue beautifully paint a bittersweet portrait of this through their work. It’s overbearing with the better, but that makes the sweet all the more precious and lasting. Just watch something happy after.