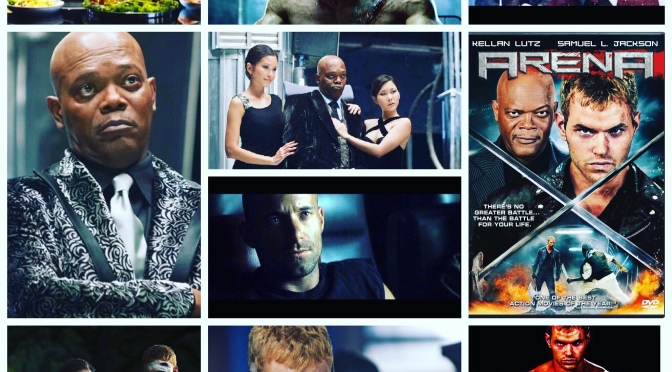 Arena is a rip snorting, bloody balls out sleaze-fest of a flick, admittedly a straight up terrible piece, but too off the wall and fucking out of its head to not deserve a look. It’s one of those high concept, low ethics extreme action things that you’d see Stallone or Schwarzenegger headlining in the 80’s (perhaps Ray Liotta or Chris Lambert on a lower budget) except here we get the ever wooden Kellan Lutz, a dude with adequate physical presence but the acting skills of a nail gun, which coincidentally is legit a thing used in a fight scene here. Lutz plays an ex-military tough guy who is kidnaped by raving lunatic computer tycoon Samuel L. Jackson into an elite, extremely illegal underground fighting syndicate, where players literally brawl to the death using anything they can get their hands on. If one guy wins ten fights (I think it’s ten), they win their freedom, or so Jackson eerily assures them with that evil, unnerving smirk. I admire the film for going all out with the fight sequences, this is truly a gruesome, fucked up piece of ultraviolet postmodern grindhouse garbage with the kind of carnage that would make Hobo With A Shotgun raise its whiskey glass and give the slow clap, especially in a montage sequence that showcases different themed fights in Virtual Reality space, the construction site one garnering the most cringes with maximum bodily harm. Jackson is truly in his final form here, he’s so far into the stratosphere of scenery chewing that you feel like running and hiding in another room to take a break from his bellowing intensity, all that’s missing is a literal moustache to twirl. Lutz forms a bond with a vixen (Katia Winter) who’s placed in his way by Sam to do just that, but her allegiance remains a mystery til later on, as does the involvement of a mysterious dude (James Remar) from his past. He also clashes with Jackson’s prized gladiator, played with sneering, rock voiced evil by Johnny Messner, who needs better roles. This flick screams by at a bulldozer’s pace and leaves you feeling like you got hit by one, it’s a thorough piece of shit if I’m being honest, but it sure kills ninety restless minutes if you’re looking for something silly to raise hell, never mind pulses. 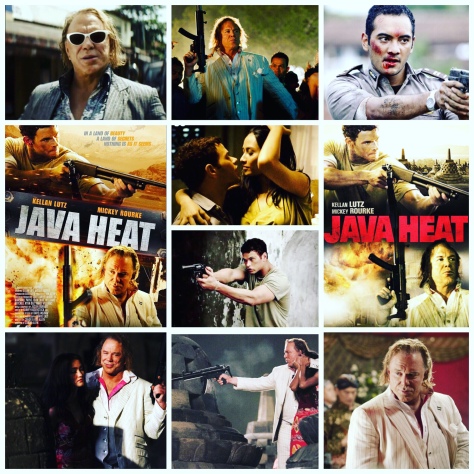 Java Heat is an odd one, and by odd I mean Mickey Rourke as a weirdo terrorist with an accent that doesn’t sound like anything from any region anywhere. It’s pretty standard action flick set in Jakarta Indonesia in which an American undercover agent (Kellan Lutz) teams up with a local Muslim police inspector (Ario Bayu) to take down ruthless international baddie Malik (Rourke), who’s involved in everything from gun running to jewel thievery to human trafficking. International really is the key word for Mickey’s approach to the role, this guy could be anywhere, sounds vaguely French sometimes, wears a crisp white pinstripe suit that seems to get cleaner with every bloody car chase and grimy street side shootout, and barks out poetic threats in a garbled tone that gives his performance a Rourke flavour all it’s own. The film is pretty substandard, Lutz is about as good an actor as a traffic median and the story is all been there done that. But Rourke, man. It’s no secret that for whatever behavioural reason he keeps getting put in the doghouse of B movies after several hopeful high profile comebacks (remember The Wrestler?), and it’s fascinating to see what little projects he does here and there to grab a buck. Although not toting his trademark little chihuahua here like in some flicks, he’s obviously been allowed to to go rebel renegade with stylistic choices as far as the role is concerned, and naturally is the most memorable thing about this. Java Mickey for the win.