Steve Mitchell has been on quite a ride. Having begun in the world of comics, he has the distinction of inking the very first book by a guy you might have heard of . . . Frank Miller. But being in New York with all his friends heading west, Steve, after forging an impressive beginning to his career, took a phone call one night from his another friend and filmmaker Jim Wynorski. Jim wanted an opinion on an idea that, if he could make it work, they might be able to get the picture made. From that conversation a film would be born. It was the cult classic Chopping Mall.

So like Horatio Alger before him, he went west and continued writing for both the worlds of film and television. The fateful moment would come one day while looking over the credits of the legendary maverick auteur, Larry Cohen, on IMDB.  Astounded by the length and breadth of Cohen’s career, Steve saw an opportunity to possibly make a documentary that would chronicle the life and exploits of the successful filmmaker.

After receiving a blessing from the man (Larry) himself, Steve set about the mammoth undertaking of  not only pulling together the interviews with Cohen’s many collaborators, all of the footage of his many works , but also the financing to bring these and the countless other elements together to form KING COHEN: The Wild World of Filmmaker Larry Cohen.

This truly insightful and utterly entertaining look at the, thus far continuing, career of Cohen is the passion project of a man with whom I share a kinship. Not only for the stories behind the men who make the movies, but also how the films we know and love were pieced together with money, dreams, light, shadow and the technical tools which help capture and refine the many wondrous adventures we as cinema goers have been relishing since our very first experiences. 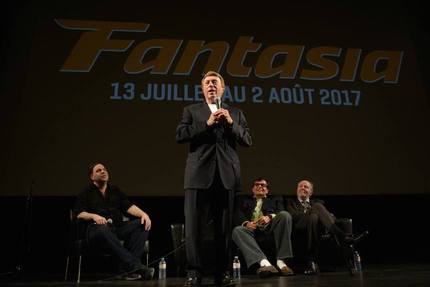 KING COHEN is a great film made by a really great guy, and it is my hope, as it is Steve’s hope, that you enjoy the story of Larry Cohen, but also come away from watching the film wishing to then seek out and discover the movies contained within that you may have only experienced for the first time as part of the documentary. The films of the filmmaker that inspired Steve’s film in the first place. (that’s a lot films)