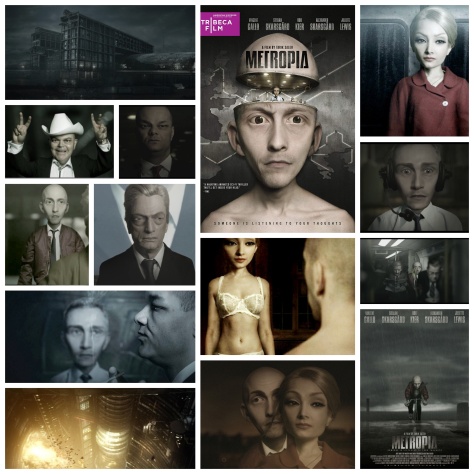 Who loves dystopian SciFi in the tradition of George Orwell? Who also loves fresh, innovative animation styles that bring worlds to life in new ways for the eyes to savour and absorb? Tarik Saleh’s Metropia has both of the above boxes checked and more, it’s a relatively star studded futuristic hidden gem that came and went with no fanfare whatsoever but definitely deserves another look.

Set in a drab, grey saturated Europe of the not too distant future, giant mega corporations rule industry and infrastructure while a vast, sprawling subway system interconnects the entire continent and heralds in a new age of depressingly humdrum office drone jobs and stifling urban monotony. Roger (cult favourite Vincent Gallo) is one of these nine to fivers trapped by the system, stuck in a daily rotunda of riding this mammoth transport system to and from a dead end job, until one day he hears voices inside his head, particularly that of Stefan (Alexander Skarsgard) a mysterious whistleblower and fellow office drone who may or may not be real. Then he’s entranced by Nina (Juliette Lewis) a sultry fellow passenger who seems to know something about what he’s experiencing. This leads him down a spooky rabbit hole of global corruption, conspiracy theories and some of the most dryly hilarious social satire this side of Terry Gilliam.

If you look at posters and promo stills of this you’ll see the intensely specific level of work put into the animation of these characters, a slightly uncanny valley esque devotion to hyper realism that both leaps off the screen and blends in perfectly with the CGI cities, offices and tunnels they exist in. The filmmakers *could* have easily made these people look like their famous and uniformly eccentric voice actor counterparts but instead only threw in the odd glance, mannerism or slight characteristic, letting these talented folks bring entirely unique performances to life. Gallo is a strange dude and always picks off the beaten path projects so he fits right in. Lewis has slinky fun as the sort of femme fatale sort of love interest with her own snaky agenda. Udo Kier, another beloved cult icon, has a ball in a scenery chewing turn as the evil megalomaniac CEO of a company that uses everyday household products for fiendish mind control, and Stellan Skarsgard makes droll, dangerous work of his head of security. There’s oh so sublime and subtle dark humour, a real sense of place and a decidedly European flavour to it all despite the varied cast. If you enjoy unique outings in the animation genre, cerebral SciFi or just a great corporate espionage yarn you’ll dig this, I really want to get it more exposure and eventually the cult pedestal status it rightly deserves.