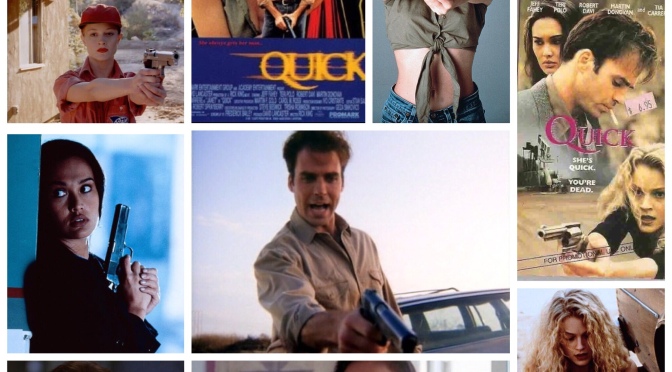 Quick doesn’t quite live up to it’s title, and probably should have been called something contrary to that like “Slow” or “Take Your Time”. It’s technically an action thriller but it ambles along at a leisurely pace, one pearl in a strand of interchangeable 90’s B Movies that you’d never dream of actually watching unless you’re a serial cinephile like myself. Actually, there is one reason this one stands out and may be worth one’s time: Teri Polo. Mrs. Gaylord Focker from Meet The Fockers to most, she’s on an early career rush here as the titular assassin, a deadly femme fatale playing the cops and the mob against each other whilst simultaneously romancing a meek accountant (Martin Donovan) who knows too much about a powerful crime boss (the legendary Robert Davi in relaxation mode). Polo is probably one of the sexiest female protagonists I’ve seen in an action flick, exuding natural sex appeal, especially in a scene with Donovan that would get anyone hot and bothered. It’s too bad the film itself can’t keep up with her and arrives pretty limp. Not even the usually magnetic Davi can seem to rile up a pulse. The only other spark of life is Jeff Fahey as a psychotic corrupt cop who’s into violent kinky sex and probably should never have been given a badge. Tia Carrere isn’t bad either as his foxy partner. Not a terrible flick when you consider the cast and what they get to do, but at the end of the day it’s still essentially just polished up time filler junk.