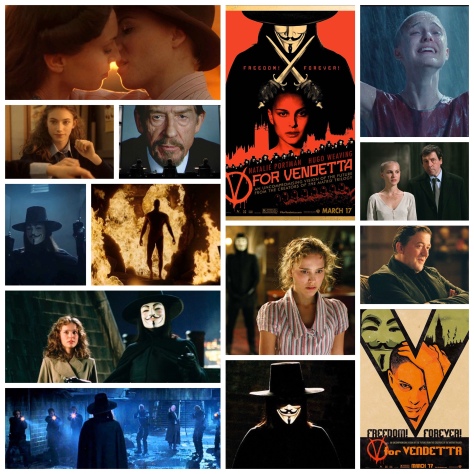 As far as comparing The Wachowski’s V For Vendetta to its source material by Alan Moore, I may be one of the only few who feels like the film is an improvement. The graphic novel is beautifully written but bleak and drab in many instances where the film adopts a rich, full bodied and ever so slightly hopeful tone in the adaptation forage. I know Moore is somewhere out there in his yurt on the plains, reading my review on a 3G tablet and cursing my name, but oh well. Fierce political commentary, blitzkrieg action picture, careful interpersonal drama and more, this has aged well (scarily well depending on the angle one views it from) and holds up gorgeously fourteen November 5ths on since its release.

Natalie Portman and Hugo Weaving make Stockholm Syndrome sexy again as Evey and V, two very different individuals whose lives have both been upended by the tyrannical, fascist British Government. He’s a vicious vigilante freedom fighter with scars on the outside and inside, she’s a wayward civilian swept up in his brutal quest to overthrow an evil dictator (John Hurt in beast mode), first as witness and later as accomplice. This involves a complex laundry list of various betrayals, sieges, escapes and terrorist acts, all brought to life in breathtaking spectacle. An underdog secret policeman (Stephen Rea, a study understated excellence) doggedly pursues them and questions his own loyalties, while the chosen date of Guy Fawkes day (hey, that’s today!) looms ever closer and with it V’s promise to blow the shit out of the parliament block.

V says it best when he growls: “People shouldn’t be afraid of their governments, governments should be afraid of their people.” There are large scale, prescient ideas at work here and despite being based on a graphic novel it feels eerily akin to our own world. V is a product of this damaged, corrupt system who has become a monster and is now ready to administer horrific dark justice on those who wronged him, working his way up an increasingly grotesque chain of despicable politicians with grim resolve. There’s a righteous fury to his quest and no other actor could have better captured the fire and brimstone behind that mask like Weaving does, he works wonders with his voice alone. There’s a lot more action than in Moore’s novel but can you really blame the Wachowskis? They are incredible at staging set pieces and the character of V suits the swooping, knife throwing, roof leaping, swash, buckle and bloody bodily harm on display here. There’s a strong undercurrent of compassion and humanity here to, as seen in my favourite sequence of the film: Portman’s Evey is locked up in a government prison and ready to wade into despair before she finds a rolled up scroll detailing the story of the cell’s former roommate and her struggles during the rise of this horrible regime. It’s in this short flashback scene alone we see all that’s worth fighting for in the microcosm of one girl’s life and feel the justification of not just V’s violent rampage but the collective uprising it stirs in the people. Great film. 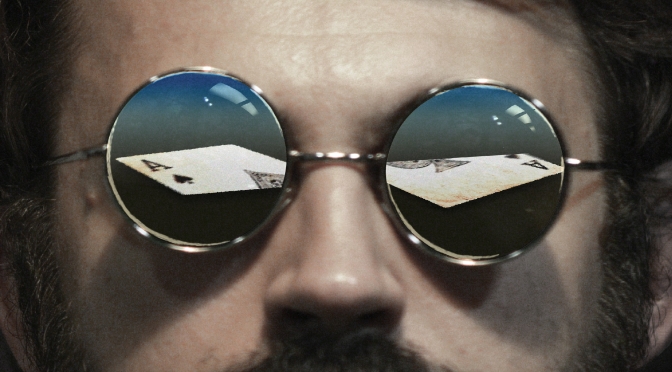 It’s funny how the fates play their hand. Not long before I hand completed the interviews for this piece, I found I had been gifted the opportunity to interview Phillip Noyce, who happens to have directed BLIND FURY – a film that was both the inspiration behind and the film that came to mind when I first heard about Blindsided: The Game. And what a film! Walter is a seemingly unassuming guy who likes his peace and serenity – and his warm apple pie. His daily life, to the voyeur, would appear idyllic – that is until he decides to visit his local convenience store at the wrong time. A gang of stand-over men are looking for payment on a debt owed by the proprietor, and Walter’s friend. You know something is rotten in Denmark, and Walter looks as though he is the kinda guy to let sleeping dogs lie. No way! Like Josey Wales before him, Walter is the man, the hero who’ll always double back for a friend. That’s when the ACTION begins….

You might find yourself, as I did, waiting for something to happen. When Walter reveals his secret however, you’ll marvel and the grace, fluidity and devastating ability that the film’s hero has been keeping under his hat. The ensuing war which Walter wages with the movie’s antagonists is fierce – with a satisfying resolution.

I think the only thing I wasn’t happy about after watching Blindsided is that it ended – ’cause I, for one, wanted more. So it was an honor and a privilege to sit down with the filmmakers behind this veritable dynamo – this indie action gem waiting in the wings. 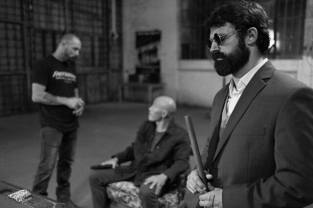 Blindsided: The Game pays homage to classic action films like Zatoichi and Blind Fury not only in its protagonist Walter, a blind swordsman, but also in that the film places heavy emphasis on storytelling combined with great action. This is no surprise with Clayton J. Barber in the director’s seat, who comes with over 20 years of experience as a stunt coordinator in Hollywood. Leading man Eric Jacobus plays Walter, a lovable cook who’s an expert gambler and swordsman. The character is the amalgamation of Jacobus’s 18-year career as a comedic action performer in the indie film arena. Director Clayton J. Barber is pushing the boundaries of modern action entertainment by bridging Hollywood with the indie action film world.

Barber notes that, “Eric Jacobus came from the indie action film realm. He was like a punk rocker of the action genre using raw film-making. We’re bridging these worlds together to create a totally new kind of action experience.” Jacobus echoes Barber’s sentiments: “Indie action guys have all the tools they need to showcase their skills, but the element of storytelling still has to be there. Clayton’s that storyteller who knows action. This is our Le Samurai.”

Barber and Jacobus aren’t the only stuntmen involved in Blindsided: The Game. The film features an ensemble of action stars and stunt performers both behind and in front of the camera. Roger Yuan, a veteran action star featured in action films such as Shanghai Noon and this year’s Accident Man, who plays the shopkeeper Gordon, also choreographed one of the film’s major fight scenes. Producer David William No (Altered Carbon from Netflix, and Matrix Reloaded) acts as a knife-wielding card shark and goes toe to toe with Jacobus in the climax. Veteran stunt performer Joe Bucaro (xXx, Iron Man) plays the ruthless gang leader Sal, Nicholas Verdi (Close Range, Agents of S.H.I.E.L.D.) plays Nico and acted as director of photography, and Sal’s enforcer is played by Luke LaFontaine (Savage Dog, Master and Commander) who also served as the sword fight coordinator.

Production company, JB Productions, is dedicated to delivering strong storytelling and first-rate action, created by people who truly understand action. Barber says, “This is a new approach to action film-making. Blindsided: The Game is the perfect collaboration for us, and we hired great stunt performers to play the lead roles and even work behind the camera with us because we wanted to work with folks who knew action. That’s the brand people are buying into, and we’re always looking to build that brand by collaborating with talent both in America and overseas.”   Jacobus and Barber previously collaborated on the hit short films Rope A Dope and Rope A Dope 2: Revenge of the Martial Arts Mafia. Blindsided: The Game is an expansion of the 2017 short film Blindsided, which was the first title under the Jacobus / Barber (JB) Productions banner. Blindsided was released to much acclaim, with fans craving a conclusion to the story. Blindsided: The Game replays the entirety of the original Blindsided and carries the story to completion, capping the film off at the length of a TV pilot.

Young Bruce Hunt loved movies and blowing things up. This love, and learning the basics of the craft from film magazines of the period, would firmly cement in his mind the path on which he would travel. As it was said in a film that Bruce would later work on, “Fate it seems, is not without a sense of irony,” a teenage Bruce would encounter Academy Award winning special-effects artist Dennis Muren in a cafe in London.

It was Muren that would advise the dreamer to seek out an effects house in his native Australia for possible future employment and, after art school, that is what the talented Mr. Hunt would do. Working with small production houses on commercials his work would soon catch the eye of the founder of one of these companies, a man named Andrew Mason. It would be Mason, producing a film directed by Alex Proyas called Dark City, that would call on Hunt to bring his passion, and by then, professional eye for effects photography to his first big screen gig.

Work on another big flick would follow, as Mason would again tap Bruce and bring him to work on the Wachowski’s cinematic masterpiece The Matrix. There would be work on the film’s sequels before, at last, Bruce would sit in the director’s chair for The Cave, an adventure in deep terror. He would emerge from the darkness to work on Baz Luhrmann’s Australia only to descend again soon after for Guillermo del Toro’s Don’t be afraid of the Dark.

Through it all his love of the movies continues to drive him and, as you will hear, he has plans to get his visions back on that big screen, just as soon as he can. It was great to sit down with Bruce. Not only is he a filmmaker I admire, but it was great to just talk about movies with him.

If you don’t know his work then now is the time to check it out. But, if you already have and you’re a fan like me – then kick back and enjoy.

Ladies and gentlemen, I give you my good mate . . . Bruce Hunt