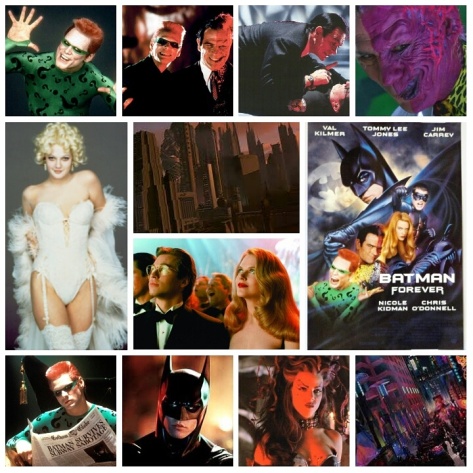 It’s true, Batman Forever is a silly, overblown, cartoonish riot of buffoonry.  But so what? It’s also awesome in it’s own way, and inhabits a certain corner of the Batman culture, the side of things that is rooted in camp and unhinged wonderment. Now, there’s an important and discernable difference between taking things far and taking things too far. That difference is delineated on one side by a willingness to be goofy, colorful and not take this superhero stuff too seriously. The other side of that of course is a disregard for limits, throwing every ridiculous line, costume and awkward scene into it you can imagine. I’m referring to Joel Schumacher’s followup to this, Batman & Robin. Everything that is weird, wonderful and extravagant about Forever just revved up to much in Robin, resulting in a piss poor typhoon of mania and over acting. Not to say that Forever doesn’t have over acting. Ohhhh boy is there over acting. Between Tommy Lee Jones and Jim Carrey, the thing is liable to give you epilipsy. But it somehow works despite its madness, a lucky stroke that Robin couldn’t have cared less about adhering to. Val Kilmer is the sedating antidote to Jones and Carrey, a remakably laid back Bats and a pretty solid casting choice, both as Brooding Bruce and Buttkicking Bats. Eternally broken up about the death of his patents, Bruce fights off Harvey Two Face Dent (Jones) in a garish, disarming Gotham City that resembles Mardi Gras in Dr. Seuss land. Jones’s Two Face is so far over the top, so rabid that it’s a wonder he didn’t give himself a bloody heart attack in the first take. Anyone who’s interested can read up on his performance, and how he pushed himself right to the heights of bombast in order to try and out-Carrey the Jim. Carrey, playing the Riddler, is a ball of twisted nerves himself, set loose on the wacky sets and basically given free reign to.. well.. go fucking nuts. It’s one of his most physical performances too, prancing around like a loon in green spandex that leaves nothing to the imagination. Aaron Eckhart’s Two Face may have had the edge for grit, but Jones has the rollicking clown version, and runs away to kookoo land with mannerisms that even call to mind The Joker in some scenes. The only thing I’ve seen him more hopped up in is Natural Born Killers, but shit man its hard to top his work in that. The story is all over the place, involving a nonsensical subplot with a mind control device, multiple elaborate set pieces, endless scenery chewing and the eventual arrival of Robin, played by Chris O’Donnell who is like the cinematic Buzz Killington. Michael Gough and Pat Hingle dutifully tag along as Alfred and Commissioner Gordon, both looking tired at this point. Debi Mazar and Drew Barrymore have amusing dual cameos as Two Face’s twin vixens, and Nicole Kidman does the slinky love interest shtick for Bruce as a sexy psychologist. Watch for an uncredited Ed Begley Jr. Too. There’s no denying the silliness, but one has to admit that the achievment in costume, production design and artistry are clear off the charts with this one, and visually it should be a legend in the franchise. Say what you will about it, I love the thing.