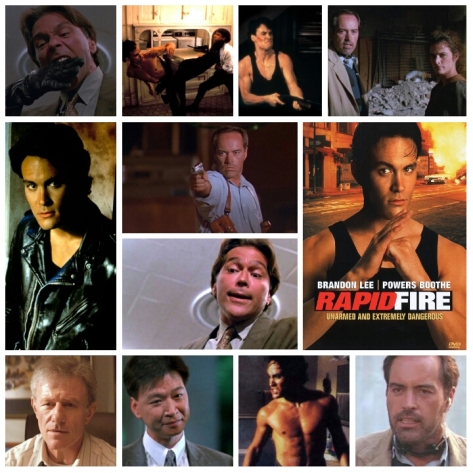 Along with the classic The Crow, Brandon Lee made few other films before his heartbreaking accidental death. His natural charisma and likeability he brought to action hero roles, accenting the tough guy qualities with an angelic vulnerability, was tragically cut short by the incident. However, Rapid Fire is a gift to fans of both Lee and the action genre alike. It’s a little further away from the notoriety of The Crow, but packs a fuming punch of martial arts, gunplay and tough talking character actors strutting their stuff to a tune that any fan of the genre can hum along to. Lee plays Jake, a young college student with turmoil in his past, haunted by an incident involving a loved one in the Tienemen Square disaster. During a visit to Chicago, he inadvertently witnesses a brutal gangland murder perpetrated by drug kingpin Tony Serrano (Nick Mancuso). This immediately puts him in the hot seat and pretty much on his own after the federal agent assigned to him (Raymond J. Barry) betrays him. His only hope lies with grouchy, paternal Chicago Detective Mace Ryan (Powers Boothe) who is on his own rampaging crusade to bring down the drug trade. Jake merely wants to survive and get out of the mess he’s found himself in. Together they punch, kick, shoot and strategize their way out of getting offed by the mafia, and kick some serious scumbag ass along the way. Lee is ultimate protagonist material: his strong points arise out of the soft touch, never being brash or hogging the screen, always serving up a helping of humble that make the ass kicking resonate tenfold. Boothe is pricelessly grumpy as the haggard detective, showing brief but unmistakable glimpses of the bruised warrior’s heart beneath, rekindled by his bond with Jake. Mancuso is like a rabid pit bull let off the chain as Serrano, a truly untethered piece of geniune psychopathic anarchy. But that’s him, always the under sung wild card who lights up his scenes with wild eyed tenacity. Chinese acting legend Tzi Ma also clocks in as a heroin dealer with a short temper, looking very young which is even made into a meta joke itself. It’s pure uncut action, somehow feeling like more thanks to Lee’s incredible presence, as well as Boothe and Mancuso adding their own lively brand of spice to an already simmering stew. Essential viewing for any action disciple.