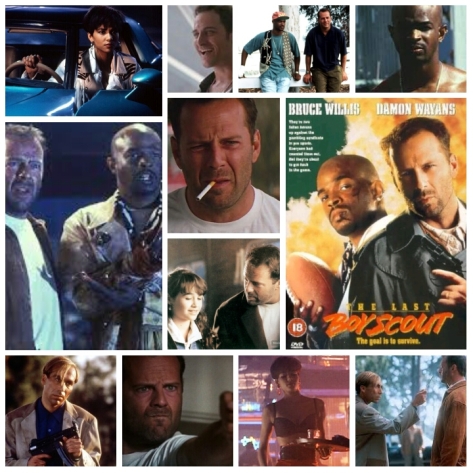 Tony Scott’s The Last Boy Scout is pure stylistic grime, an exercise in early 90’s action with the blackest of humour. The tone is set with a square jaw early on: a star quarterback for a hotshot NFL team is under a lot of underground pressure to make that perfect play and in turn please the loan sharks. He buckles under the heat, ends up pulling a gun on the field and murdering a score of opponents before turning the gun on himself. Now horrifying as that is, if you have a sick sense of humor like me it conjures a dark chuckle of the most guilty variety, because.. well, it’s funny! Albeit in the darkest way possible, which is the arena this one skates in, love it or leave it. Upon closer examination of the script we discover it’s penned by that wonderful man Shane Black, who gave us Kiss Kiss Bang Bang and the upcoming The Nice Guys. No one can produce such heinous mayhem with a cavalier attitude and actually get away with it as well as Black does. The guy is a prodigy of dark humour, and who better to embody his protagonist here than a sheepish Bruce Willis as Joe Hallenbeck, a jaded ex detective who is so sullen and cynical he’s almost comatose. He’s paired with equally slummy former quarterback Jimmy Six (Damon Wayons), lazily trying g to solve a case involving the murderous quarterback and some shady politicians. Along the way that’s paved with many a sarcastic, beleaguered exchange they cross seedy paths with shady villains (Taylor Negron, RIP, and a  youthful Kim Coates), a beautiful working girl with ties to the case (Halle Berry) and Willis’s spitfire of a dysfunctional daughter (Danielle Harris). There’s a wonderfully bloated supporting cast including Noble Willingham, Chelsea Field, Joe Santos, Bruce McGill and more. It’s got a bite that stings, mainly thanks to Black’s frighteningly stinging screenplay which give the film it’s sardonic, put – upon aesthetic. This meshes together nicely with Scott’s trademark sun soaked, pulpy, picturesque tone and provides one hell of an action movie rode.  Nasty in all the right places, funny when the story begs for it, and build to last.