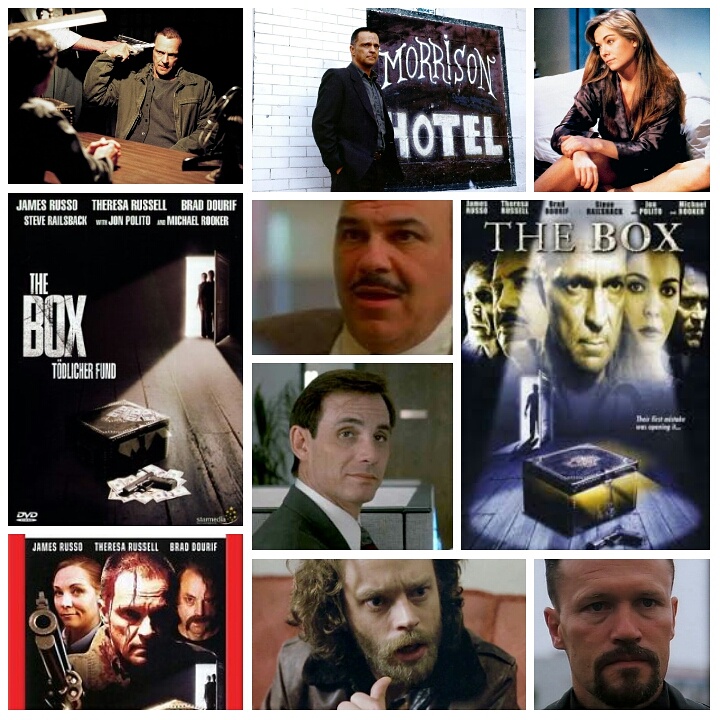 The Box is a moody little crime drama thriller starring James Russo, whose appropriately brooding persona lends itself to grim neo noir films such as these. He’s an actor who has almost entirely worked in B movies for a long time, and while you have to watch out for most as they are usually geniune piles of dog shit, this one is a jewel amongst the rubbish. Russo plays Frank Miles here, an ex con trying to go straight, sticking with the dead end job his P.O. has given him to stay out of trouble. Soon he meets beautiful waitress Dora (Theresa Russell) who falls in love with. The two of them try to start a new life together, but as we all know sometimes it’s very hard to run from your past, and soon enough trouble comes looking for them. Frank tries to get some money owing to him from his sleazebag of an ex-associate Michael Dickerson (a detestable Jon Polito) and things go wrong. Violence ensues, and Frank finds himself in the possession of a mysterious box which he can’t open and hasn’t a clue about. Dora has a scumbag boyfriend in club owner Jake Ragna (a terrifying Steve Railsbac) who I’d dangerous, volatile and obsessive about her. Soon, an evil corrupt Police Detective named Stafford (Michael Rooker) makes their lives hell as he searches for the box. Frank and Dora take refuge at the home of Stan (Brad Dourif, excellent), Frank’s former cell mate,  friend who is now a weed dealer. Even this may not be enough to keep them safe, as the long arm of the crooked law probes, and Stafford gets closer and closer. It’s a depressing situation forged by bad decision and the perhaps inescapable knack for trouble that some people tend to have, whether it’s coincidence or a measurable character flaw is eternally up for debate. The pair try so hard to fix their lives and still seem to be headed for a tragic dead end. Russo has sadness in his eyes in every role, as well as a boiling anger to match it, he fills out his protagonist very well. Rooker and Railsback make scary work of the two villains, especially Rooker who uses the kind of blatant brutality and abuse of power that are essential ingrediants in very dangerous men. Dourif is Dourif, which is never not mesmerizing, and Russell does the wounded angel thing down to the bone. A sad story, with a dream cast (for me, at least), a downbeat reflection on lives gone down the wrong path, a diamond in the rough noir thriller of the best kind.