An absolutely insane visual head trip, and legendary artist Saul Bass’s only feature film, Phase IV is a science fiction horror mind ripper that asks impossibly complex questions and offers few explanations.  The definition of high art, this is a film that will infuriate as much as it entrances, using stunning micro-cinematography to capture an insect revolution from the inside out.

A cosmic event endows the ant population of Arizona with a higher form of intelligence.  They become a hive mind and begin to erect strange pillars in the desert.  A scientific duo, along with a hold out family, begin a war against the increasingly dangerous insects.  One of the scientists believes that ants may have a deeper purpose, while his counterpart is obsessed with destroying their queen.  As the stakes rise and the ants begin to reveal their true intentions, mankind is conscripted into a higher form of existence, in which their etymological overlords could redefine their species or annihilate it. 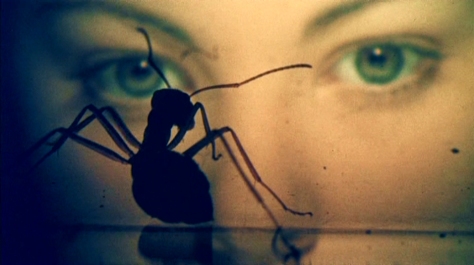 Renowned wildlife photographer Ken Middleham, whose terrifying cinematography on The Hellstrom Chronicle caught Bass’s eye, captures the insect evolution with intricate closeups.  Despite the ants beginning as the antagonists, the viewer is helplessly drawn into their emergent society, complete with head decorations, espionage missions, and one of the most somber funeral scenes ever depicted.  Phase IV is a hypnotic voyage, following the likes Kubrick in which it takes extremely grandiose concepts and machine guns them across the screen and into the subconscious.  Mayo Simon’s script is a minefield of coffee house ethics and LSD prophecy, moving from the inevitability of the ant kingdom to the desperate and fractured human response.  The characters run the gambit from sexpot, vengeful hunter, and quizzical scientist, with each transforming into a specifically designed piece for the insect agenda.  Dick Bush handles the human side, capturing their plight in a lurid explosion of red and orange, using vibrant color to mirror the extreme emotional chaos.

Cult movie king Michael Murphy stars as Dr. Lesko, a mathematician who believes he can communicate with the insects via numbers.  His counterpart is Hubbs, played by the legendary Nigel Davenport, the voice of HAL from 2001: A Space Odyssey.  Davenport brings a delicious amount of obsession to an already crowded party, with Hubbs refusing peace and embarking on a one man extermination mission.  The conflicting scientific approaches is an interesting feature, showcasing how even the most intelligent scholars are vulnerable to primal paranoia.

John Barry’s art direction is a Frankenstein mismatch of Escher and Giger, presenting the ant colony as a cold, otherworldly place filled with odd angles and bizarre constructions.  The human world is filled with technology and overwhelmed with metallic silver, while being completely surrounded by the ever encroaching red sands of the desert, hyper visualizing the ants rise to supremacy.  Brian Gasciogne’s score enhances these concepts by blending classical and electronic melodies, harmonizing with the stoic insects and the frantic humans, with both genres presenting as opposites, and yet, oddly complimentary.

All of these wonderful and atypical elements combine into an instant B movie classic.  Phase IV is one of the most popular Mystery Science Theater 3000 episodes, and late night airings on less than reputable cable channels allowed the film to develop a cult following and quietly escape the 80’s VHS graveyard.  The original ending was cut by the studio, considered to be even more of a psychedelic departure than the rest of the film.  It was thankfully rediscovered in 2012 and can be found on Youtube.  The film has been cited as an inspiration for songs, video games, and Cosmotos’s Beyond the Black Rainbow.

Available now for digital rental, Phase IV is a thinking person’s film…if said person was overdosing on psychotropics.  Featuring a unique premise, outstanding micro visuals, and an unusually poignant representation of insect culture, Phase IV is a kaleidoscopic fever dream in which the war between man and nature is revealed to be a much deeper, and possibly sinister undertaking.  If you’re in the mood for a time capsule experience that mainlines 70’s aesthetics and preternatural ethical dilemmas, Phase IV delivers a singular experience.

2 thoughts on “Phase IV – A Review by Kyle Jonathan”