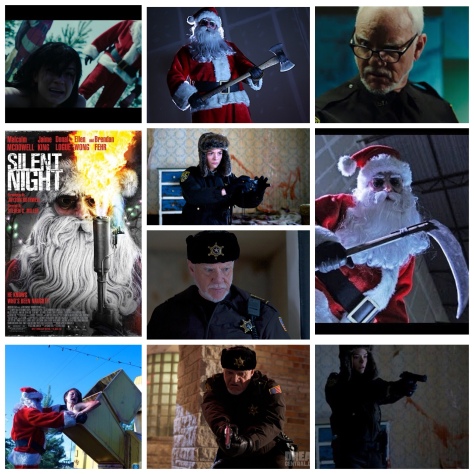 Santa is an axe wielding mass murderer! In Silent Night he is anyway, a slick, excessively gory remake of an obscure 80’s slasher called Silent Night, Deadly Night, which I’ve still yet to see. This new version is a heavy handed, knowingly silly affair, as a small town Sheriff’s department races to find a heinous killer who dresses like the red guy and has been wantonly slaughtering townsfolk all morning. A timid deputy (Sin City’s Jaime King) is the front runner to head him off at the pass, joined by the cantankerous, mouthy Sheriff, played by a hammy Malcolm McDowell with attitude to spare. The murders are so over the top it seems like the filmmakers wanted to outdo each and every slasher film out there, an impossible task, but they throw Paint at the wall furiously anyway. Electrocution by Christmas lights, high powered flamethrower, a souped up stun gun used to skewer an annoying 14 year old chick, but my favourite has to be the naked stripper fed through a giant wood chipper in a scene that would have Fargo covering it’s eyes. That’s the kind of flick it is, sleazed out to the max, tongue firmly in it’s cheek and never too serious. Problem is, a few of the actors (I’m looking at you,

priest dude) take it way too far into camp territory and ruin whole sequences with their wannabe satirical blathering. McDowell gets the tone right though, and is a right treat as the world’s most sarcastic lawman. Donal Logue also fares well as a bad tempered grinch of a mall Santa who eventually tangles with the murderer in a fiery police station set piece. Maybe I was just tired, but when the origin of the killer is finally revealed, which I waited for the whole time, it seemed like kind of a confusing letdown, a bit less of a surprise than it should have been. Worth it for the kills and a couple entertaining performances, but ultimately not much.