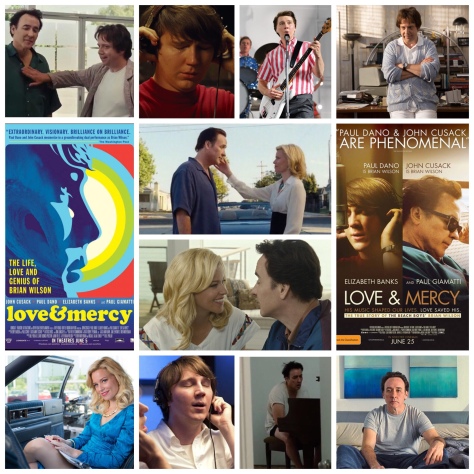 I’m not what’d you’d call a Beach Boys fanatic other than loving their most recognizable hits since I’ve listened to music, but Bill Pohlad’s Love & Mercy tells a story that just needs to be told and could grip anyone with its love, suffering, perseverance and genius, genius in the form of the band’s troubled but brilliant lead singer Brian Wilson, played here in a duo of encore performances by Paul Dano and John Cusack, both giving what may be the finest work of their careers. For those who are unaware (like myself before watching this), Wilson suffered a lengthy psychotic break that ran alongside a good portion of his career, brought on by many things including stress, fame and the ongoing psychological/physical abuse from his father (Bill Camp here), who did double duties as the group’s manager. Getting fully acquainted with rock bottom and finding himself alone later on in life, he was thrown from the frying pan into the fire when he went under the care of unconventional, deranged psychiatrist Gene Landy (Paul Giamatti, terrifying), and found himself victim not only to his own demons, but a new external one trying to take advantage of him. By chance he met kind Cadillac salesgirl Melinda Ledbetter (Elizabeth Banks), the two seem to have fallen in love almost instantly, and it took her kindness, patience and determination to save him from almost certain death in Landry’s nefarious hands. I’m going on the assumption that what we see here in the film is as close to the true story as possible, because the events are too specific and jarring to have been made up. Early scenes show Dano as a young, vibrant Wilson, hard at work on an experimental opus project that would eventually drive somewhat of a wedge between him and his band mates. The later segments with Cusack, interspersed via meticulous editing, are both a love story and a horror story, as we witness Melinda and him fall for each other, while lecherous Landy does everything he can to keep them apart. Giamatti plays the guy full tilt crazy, a dangerously obsessed scumbag whose actions are so damaging to Wilson that you want to cave his head in with a rock. Cusack is wonderful, putting quiet soul into the work and keeping the heartbreak and hurt of his former years on a dimmer so we don’t forget, but see a new, brave soul try to rise from the ashes. If this might be their best work, it’s certainly the case for Banks, I’ve never felt more connected to a piece of her work. She’s attentive, playful, compassionate and low key brilliant as Melinda, Brian’s rock, guardian angel and eventual love of his life. There are gaps in the story, as many of the no doubt horrific times are either left to our imagination or only suggested at, but that gives this unbelievable, all too true story all the more power. It’s inspiring, to see someone go through all that heartache and strife and come out of it still kicking. It’s also one of the most intelligent and empathetic movies to address the subject of mental illness in some time, using a compassionate, frankly implemented lens to tell Brian’s story and illustrate his complicated condition. Along with the obvious inclusion of many Beach Boys hits, some mid-composition, there’s a gorgeous original score by Atticus Ross that accents the emotional scenes between Brian and Melinda perfectly. One for the biopic books, and a story worth taking the time to listen to.