Gotham City, 1981. Sanitation services are on strike, leaving piles of garbage curb side. Mounting inequality and rampant poverty poison the collective climate and spur on bubbling unrest. Billionaire Thomas Wayne (Brett Cullen) makes the kind of callous comments on live tv that don’t help anyone’s situation much. “Is it just me or are things getting crazier out there?” laments Joaquin Phoenix’s Arthur Fleck. He’s more right than he knows, both in terms of ‘out there’ and closer to home. Todd Phillips’ Joker is a brilliant, flammable, uncomfortable, thought provoking, beautifully crafted piece not only on its own terms as a standalone character study but also as part of the Batman universe as well.

Arthur lives with his ailing mother (Frances Conroy) in a shit box apartment, works as a street clown for an agency that resents him, sees a dour social worker until funding is cut along with access to his medication. He idolizes a funny-man TV talk show host (Robert Deniro in scenery chewing mode) until the guy cruelly mocks him for laughs. Arthur is as close to snapping as the entire city around him and one can almost use his gradually disintegrating grasp on reality and coherence as a barometer for that of Gotham itself and the world outside the cinema that we know too. Phoenix is indescribably good in the role, shedding pounds and growing a shaggy mane to portray this beyond iconic antagonist and giving us a portrayal that is so well built up, so scarily developed that by the time he has incarnated into the full fledged clown prince of crime we feel like running for the door in terror. But he’s also madly human too, a man repeatedly stomped down by the forces around him until a combination of stress, untreated mental illness, hurt and humiliation push him over that edge in a startling act of violence. Joaquin is the star here but Phillips also populates his Gotham with a variety of faces both new and familiar including Douglas Hodge, Zazie Beets, Brian Tyree Henry, Josh Pais, Bill Camp, Shea Wigham, Glenn ‘The Yellow King’ Fleshler and more.

So, about that elephant in the room. I don’t usually like to address this kind of thing in my reviews but this film has inexplicably whipped up a hilariously misguided fever of opinions, so read loud and clear folks: The Joker is a comic book character. This is a film. The way he’s written here is as a mentally ill victim of an would be standup comedian who is pushed to the brink, left to stew in his own mind as well as a horrifying cycle of abuse and finally loses it. This film in no way glorifies, condones or puts lone wolf violence onto a pedestal and if you think otherwise than you either haven’t seen the film or gravely misunderstood it’s themes. This maniacal, dogmatic, woke-a-cola nonsense has no business here and those peddling it should be embarrassed of themselves, shut both their mouths and their laptops, go into the corner and count to ten. Got it? Good.

Philips has created quite the vision of Gotham and The Joker here, drawing inspiration from Martin Scorsese’s work, lovingly observing key touchstones of the Batman universe and adding his own stylistic flairs that help this thing do a dance all its own. This is not a crowd pleaser or a pleasant experience though. Gotham has none of the Hammer aura of Burton or Broadway kitsch of Schumacher, but is simply a weary, dirty, worn out avatar for late seventies New York with just a tad of 30’s/40’s atmosphere present in the soundtrack choices and a terrific cameo from Charlie Chaplin. Phoenix owns the film and can’t really be compared. I love every Joker portrayal so far in cinema (yes even Jared Leto) for a host of different reasons and Phoenix adds another incendiary notch to the belt here with his psychologically shredded howl of a performance. Add to that gorgeous, gritty urban cinematography by Lawrence Sher, stunningly grimy and beautifully lit production design by Mark Friedberg and a surprisingly ethereal, skin crawling score from Hildur Guanodóttir and you’ve got quite the package. One of the best films of the year so far.

I’m not what’d you’d call a Beach Boys fanatic other than loving their most recognizable hits since I’ve listened to music, but Bill Pohlad’s Love & Mercy tells a story that just needs to be told and could grip anyone with its love, suffering, perseverance and genius, genius in the form of the band’s troubled but brilliant lead singer Brian Wilson, played here in a duo of encore performances by Paul Dano and John Cusack, both giving what may be the finest work of their careers. For those who are unaware (like myself before watching this), Wilson suffered a lengthy psychotic break that ran alongside a good portion of his career, brought on by many things including stress, fame and the ongoing psychological/physical abuse from his father (Bill Camp here), who did double duties as the group’s manager. Getting fully acquainted with rock bottom and finding himself alone later on in life, he was thrown from the frying pan into the fire when he went under the care of unconventional, deranged psychiatrist Gene Landy (Paul Giamatti, terrifying), and found himself victim not only to his own demons, but a new external one trying to take advantage of him. By chance he met kind Cadillac salesgirl Melinda Ledbetter (Elizabeth Banks), the two seem to have fallen in love almost instantly, and it took her kindness, patience and determination to save him from almost certain death in Landry’s nefarious hands. I’m going on the assumption that what we see here in the film is as close to the true story as possible, because the events are too specific and jarring to have been made up. Early scenes show Dano as a young, vibrant Wilson, hard at work on an experimental opus project that would eventually drive somewhat of a wedge between him and his band mates. The later segments with Cusack, interspersed via meticulous editing, are both a love story and a horror story, as we witness Melinda and him fall for each other, while lecherous Landy does everything he can to keep them apart. Giamatti plays the guy full tilt crazy, a dangerously obsessed scumbag whose actions are so damaging to Wilson that you want to cave his head in with a rock. Cusack is wonderful, putting quiet soul into the work and keeping the heartbreak and hurt of his former years on a dimmer so we don’t forget, but see a new, brave soul try to rise from the ashes. If this might be their best work, it’s certainly the case for Banks, I’ve never felt more connected to a piece of her work. She’s attentive, playful, compassionate and low key brilliant as Melinda, Brian’s rock, guardian angel and eventual love of his life. There are gaps in the story, as many of the no doubt horrific times are either left to our imagination or only suggested at, but that gives this unbelievable, all too true story all the more power. It’s inspiring, to see someone go through all that heartache and strife and come out of it still kicking. It’s also one of the most intelligent and empathetic movies to address the subject of mental illness in some time, using a compassionate, frankly implemented lens to tell Brian’s story and illustrate his complicated condition. Along with the obvious inclusion of many Beach Boys hits, some mid-composition, there’s a gorgeous original score by Atticus Ross that accents the emotional scenes between Brian and Melinda perfectly. One for the biopic books, and a story worth taking the time to listen to. 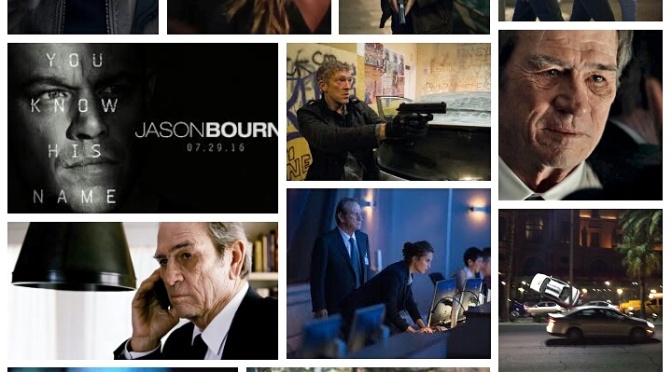 He’s back, baby. God it’s so good to see Jason Bourne doing his thing on the big screen again, especially in a flick that’s every bit as excellent as the original trilogy in all the old, good ways, while adding a few twists of its own that suit the digital age we have progressed into, and the concerns which go hand in hand with it. It’s been sometime since Jason swam away out of frame as an unsure news report claimed that his body was never recovered, and a slow smirk spread over Nicky Parson’s (Julia Stiles) face as she observed on TV. With ex CIA director Kramer (Scott Glenn) no doubt incarcerated, the agency is headed up by the worst apple of the bunch so far, Robert Dewey (Tommy Lee Jones), a surveillance hound dog who has ties to Bourne’s past and wants to use a record breaking social media app to illegally spy on users for ‘national security’ purposes (heard that one before). Scary stuff, but simply a backdrop for Bourne to come speeding back onto their radar and make hell for them, after Nicky hacks the database and spurs him on. Damon is beefed up, weathered and has never been more furious as Bourne, and if you thought his revenge rampage in Supremacy was something to behold, just wait til you see these fireworks. It feels a bit more intimate than the last three, with a lot of time spent on Bourne, and less agency types howling in control rooms and backstabbing each other, save for Dewey and his eager beaver protégé Heather Lee, played by Alicia Vikander in a slightly perplexing character arc that I’m still trying to think through. She has her own agenda, clashing with that of a ruthless rogue asset (Vincent Cassel is going grey, but damn he can still run around like nobody’s business) that Dewey foolishly sends after Jason. Paul Greengrass is back in the director’s chair again, and after this chapter I can honestly say I think he’s the best captain  to ever sit at the helm of a Bourne flick. He just has this way with action that never feels too stylized or obviously cinematic, while still delivering a pure rush of thrills that exist in a realistic space. There’s an early scene taking place in Greece during a dangerous riot that feels like they just dropped the cast and crew in the midst of a real life police skirmish and started shooting, in more ways than one. My favourite has to be a thundering car chase down the Vegas Strip in which a SWAT tank causes a jaw dropping bout of vehicular Armageddon. Sounds too over the top for a Bourne flick, right? You’d think, but somehow they just make the thing work and stay within the parameters of this world. I had this fear that they wouldn’t be able sneak another Bourne movie onto the back end of an already perfect trilogy without it feeling out of place. While it certainly is different than it’s predecessors (we live in a radically different time), it still has that magic, feverish rush that I love so much and that has carried the franchise along on wings of adrenaline. A blast. Cue Moby’s Extreme Ways to play out my review.