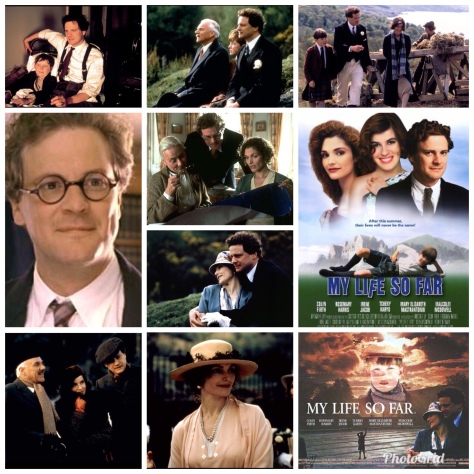 I love Colin Firth very much as an actor, I think there’s a wealth of intensity and charisma behind that befuddled, cute British persona, and I love how in recent years he’s branched off and started trying out all sorts of roles and genres he hasn’t done yet, he’s really underrated in terms of versatility. I also love delving back into the last few decades with actors and perhaps finding hidden gems I never thought of or didn’t notice before. (Every time someone calls me out on being lost in my phone or texting some girl it’s usually because I’m just intently perusing an actor’s IMDb for titles I’ve missed). Hugh Hudson’s My Life So Far is one such gem, a lovely, charming piece based on the memoir of Dennis Forman, a man who grew up in a great manor in the Scottish highlands, surrounded by friends, family and nestled in that calm period between World War One and two, where life seemed idyllic. Young Fraser (Robert Norman) lives an eclectic life out there that’s the perfect setting for a poignant memoir. His loving father (Firth) strives to be a strong disciplinarian but has a tender heart and a playful disposition, his mother (Mary Elizabeth Mastrantonio, gorgeous as ever) is the same. The conflict arises with the arrival of a beautiful distant relative (Kelly MacDonald) who gets everyone a little hot and bothered and awakens the first hints of sexual desire in Fraser. The grandparents hover in and out of their lives too, played by Rosemary Harris and a gruff, hilarious and compassionate Malcolm McDowell. Life gets topsy turvy in all sorts of ways, especially when an aviator from royal descent (Tchecky Karyo) crash lands his plane directly on their property and immediately tries to woo MacDonald. It’s one of those slice of life comedy dramas that doesn’t strive to say something lofty about the big picture of humanity or plumb for subtext beneath, but simply exists to enjoy as the recalling of one person’s life, or rather a piece of it. A lovely one.