John Flynn’s Lock Up is a great early Sylvester Stallone prison flick, back in the late 80’s heyday of the action genre where envelopes were pushed, no punches were pulled and rough, brutal scripts were green-lit on the daily. Stallone plays Frank Leone, a genuinely likeable guy who has a few weeks left on a sentence that resulted from a trumped up charge to begin with, and he’s ready to get out. Donald Sutherland’s Drumgool, the new warden, has other plans though, as the two of them have a rocky past and he has nothing but contempt for Frank. This spurs an onslaught of ruthless, bloody prison violence, yard fights, shankings, betrayal and riots as sneering sociopath Sutherland does his best to ensure that Stallone never again breathes free air. The film is so charged up and cold blooded it’s almost comical at times, but always enjoyable and hard hitting. Director Flynn is responsible for stuff like the Steven Seagal bone cruncher Out For Justice and notorious 70’s exploitation flick Rolling Thunder, so grit and machismo are par for the course and then some. Sutherland just goes above and beyond as Drumgool, it’s one of the great under-sung villain performances in the genre, the guy is fucking evil personified and the legendary actor eats up every frame of screentime, demolishing scene partners left and right with that leering glare and slate granite drawl. John Amos scores as the incredibly stoic captain of the guard, there’s great work from Sonny Landham, Darlene Fluegel, Frank McRae, Larry Romano, Danny Trejo and a stunning film debut by Tom Sizemore, already a scene stealer as a fast talking con who plays sidekick to Stallone. You won’t often hear this mentioned in the prison flick round table discussion but it’s really one of the best out there, rough and ready to brawl, with a galvanized steel veneer over the fight sequences, hard bitten performances, nice moments of fleeting humour and no shortage of breathless, pulverizing violence. 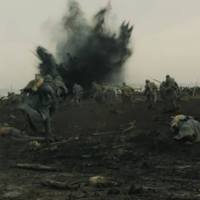