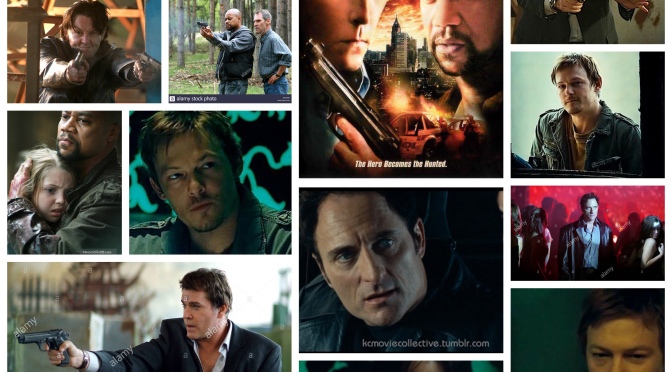 In the realm of Cuba Gooding Jr straight to DVD stuff, Brian Smrz’s Hero Wanted is probably my favourite. Many of them are absolute paycheque collecting trash, some are half assed efforts but a couple are scrappy, unique little gems worth seeking out. Gooding explores the dark side of human nature here as Liam Case, a simple inner city garbageman who uses the underworld ties of his colleague Swain (Norman Reedus) to stage a bank robbery for… unorthodox purposes, to say the least. Only problem is that the gang they hire is led by unstable maniac Skinner McGraw (Kim Coates) and his cop hating second in command Derek (Tommy Flanagan). The robbery ends up in disastrous bloodshed thanks to Liam’s plans and he then launches a personal crusade of vigilante justice against Skinner’s gang. All this commotion also attracts the attention of a tough homicide detective (Ray Liotta) who comes gunning for him as well. That’s only the main story arc, there’s all kinds of swervy subplots including a young girl (Sammi Hanratty) who Liam saved from a burning car years ago, the mother (Jean Smart) of one of the bank tellers injured in the botched robbery and the great Ben Cross as Liam’s ex special forces adoptive father.

It’s a lot to take in and it doesn’t all work together in the pot it’s thrown into, but it’s never not interesting, has a gritty 70’s crime aesthetic to it, plus both the writing and performances are organic and inspired. Gooding is terrific, his character essentially a perpetual fuckup whose schemes have lead him down a dark path, one he’s fighting brutally to find his way off of. Liotta brings heart and humour, not just another thankless cop role but someone who seems like an individual. Reedus gives my favourite performance as a dude who walks the line between good and bad finely, and pays dearly for it in an intense, poetic cap to his arc. Coates and Flanagan chew the scenery like there’s no fucking tomorrow, relishing the villain roles and creating two reprehensible street scumbags for the ages. The film skips all over the place and jumps around in time on a whim, so characters who died a few scenes ago are back again, a plot thread resolves itself before its even begun and it takes some getting used to. It’s a low budget effort at heart, but a huge and very creative one at that. A lot of the dialogue seems improvised and very candid, my two favourite exchanges being: Liotta and enters a crime scene, sees his partner visibly shook up and dryly intones: “What’s the matter? You look like Oedipus after they told him he just fucked his mother.” Elsewhere, Gooding and Reedus have a beer on their lunch break and shoot the shit: “You know America was founded on labour?” Reedus absentmindedly observes. “My uncle used to work in that factory over there,” replies Cuba, “Now that niggas on crack.” It’s that kind of deliberately offbeat energy that makes this one for the books and not just another B grade write off. Fun stuff.