“I’m most intrigued by how you remember all that shit? It is just astounding to me,” joked Sam Elliot with his token southern drawl to TMC’s Dave Karger who moderated the Virtuoso awards at the 34th annual Santa Barbara International Film Festival. Elliot, along with John David Washington, Claire Foy, Richard E. Grant and many more were honored with the prestigious award as the awards season campaign comes to a close. Elliot was the flagship honoree, saving his Q&A for last.

“He’s the most brilliant director I’ve ever worked with,” he said speaking of Bradley Cooper, who after their initial meeting, became text message buddies and that is how the two communicated all the way up until filming. Elliot was concerned that he was going to be unable to film his role in A Star is Born, due to his commitment to Netflix’s The Ranch, a four-camera sitcom that is filmed before a live audience that has a lot of moving pieces. Elliot expressed his concern to Cooper via text message and Cooper instantly replied: “I’m not going to let you go. We are going to work it out.”

Filming for The Ranch ended on a Wednesday and the following Friday Cooper arranged for a set to be constructed in the parking lot of the Greek Theatre in LA, where they filmed their first scene together, the emotional brother v brother moment where Cooper punches Elliot and knocks him to the ground. Elliot did not once say “Lady Gaga”, instead he referred to her as “Stefani” and spoke of her very affectionately.

The first time he saw the film in its full cut was at its premiere in Toronto, recalling how he was weeping throughout the film and was surprised at how much screen time he had in the final cut because when he had seen the rough cuts prior, his role was reduced substantially. Backstage, before the Q&A at TIFF, Stefani came up to him and asked if he was okay because he was still crying because he was so affected by the film.

“I’ve wanted this for so long,” Elliot candidly said about his first Academy Award nomination as the audience of over two thousand people erupted in thunderous applause. “Awards are great. Awards are a wonderful thing, but it’s all about the work.” Elliot turns his phone off at night and was awakened by his wife, Kathrine Ross, at seven-thirty in the morning the day nominations were announced. When asked by the moderator what it was like for his wife to be the one to tell him, Elliot instantly responded, “it was pretty cool.”

At the close of the evening, Elliot was asked what film came out this year that he thought that everyone should see, after thinking for a moment he said Spike Lee’s Blackkklansman and said that the film is very important and more relevant now than the period for which it took place. He was also asked what accent he thinks would be impossible for him to do, where he quickly quipped “anything that isn’t a south-western accent.”

Sam Elliot is effortlessly cool. He’s been a cinematic mainstay for five decades. He’s been a lifeguard, the President’s chief of staff, and countless cowboys and military brass. After all this time Elliot has been awarded a Screen Actors Guild and Academy Award nomination for his finest role to date. He may not win the gold, and that is okay because Sam Elliot will always be Sam Elliot. 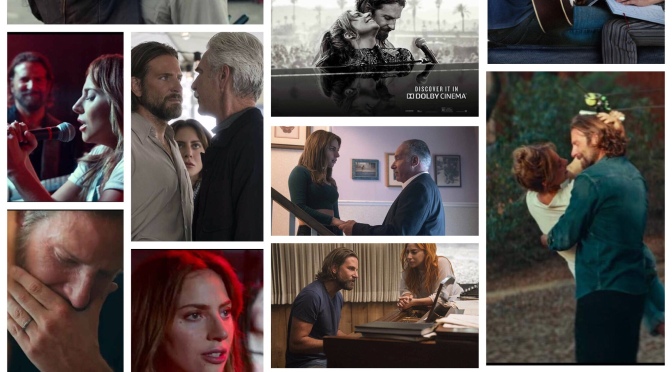 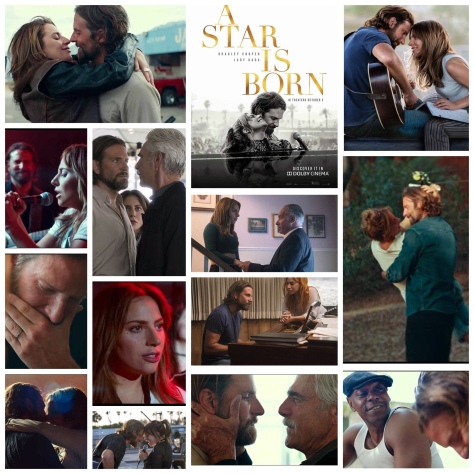 My first thought a few moments after seeing Bradley Cooper’s A Star Is Born: Isn’t it so cool that one of the most poignant scenes in cinema this year is shared between Lady Gaga and Sam Elliott, two artists who couldn’t be more far flung from each other or born of different backgrounds within the industries. That’s a testament to the eclectic cast Cooper has rallied for this absolute fucking diamond of a film and as assured a director’s debut as ever. Filled with many more poignant scenes, instant classic songs, heartbreak that will have you bawling, beautiful direction, believable characters, naturalistic free flowing writing and at least three mega Oscar worthy performances, this is the best film of the year so far and will no doubt sweep said awards.

This story dates back a few versions to the 50’s, but Cooper makes the story seem so fresh and organic that one can hardly even call it a remake, especially when you consider how much brand new, totally inspired music composed and sang live. Cooper is Jackson Maine, an Eddie Vedder-esque rocker who discovers and falls in love with Lady Gaga’s Ally, a young waitress with the voice of an angel and a firebrand of a personality. While her star is on the rise with songwriting, performance and poise, Jack’s is falling from the heavens of fame due to alcoholism and drug addiction, fast approaching the nadir and eventual exodus of his career. Cooper and Gaga have chemistry that fills up every frame until it leaps off the screen, a warm, conflicted and symbiotic relationship blossoms, is put to the rest and weathers a very heavy storm as Jack drifts in a sea of his demons, struggling to hold on. They both give the kind of immersive performances that some actors strive their whole career towards; watching the film I believed that here was Ally and Jackson onscreen, two fully formed, human characters and not simply Cooper and Gaga in their respective roles. Their voices are magic too, especially in an earth shattering duet of one of Ally’s original compositions, a gorgeous tune that practically demands the Oscar for original song.

Cooper has carefully chosen his supporting cast and the result is some moving, interesting work from a troupe who are all cast refreshingly against type. I can’t speak highly enough of Sam Elliott’s work here as Jack’s older brother Bobby, a stormy yet compassionate fellow, this film gives the quintessential cowboy something to actually do with his role, the result being the best, most vulnerable work I’ve ever seen from the guy. Andrew Dice Clay is resurrected to play Ally’s father and brings both warmth and jovial comic relief, Dave Chapelle has a brief but very sweet bit as Jack’s friend and voice of reason. Even the smaller roles are brought to life well, from Greg Grunberg as Jack’s trusty driver to character actor Ron Rifkin, excellent as a kindly rehab counsellor.

Cooper should be proud of his work onscreen, and prouder still of that behind the camera. There is no showboating, no gimmickry, no bells and whistles or arbitration in his direction here, he’s crafted a passionate, heartbreaking, streamlined and beautifully character driven piece of work, full to the brim with love, music, conflict and ideas without seeming overstuffed or cacophonous. Coasting on the heights of the original music, sailing through the rivers of torment and turmoil between the two characters and walking the paths they walk through their relationship, Cooper’s eye captures this tale adeptly, doing things with the camera that seem fresh and different but never taking us out of the story. This is a film that will no doubt go down in history and, despite being one of several iterations, become a classic in cinema for generations to come.

For a film in its fourth incarnation, Bradley Cooper’s A Star is Born is an endearing and remarkable film that contains every familiar trope, cliché, and prepackaged plot narrative possible. It embraces exactly what it is, it is self-aware with both subtle and tongue and cheek nods to previous versions as well as to the rich ensemble of actors who bring their own homages to their own roles. The film is a triumphant spectacle; it is visually stunning by being shot and crafted with command authority and passion. The musical scenes, which were filmed with live singing, only add to the powerhouse of the film that ushers in urgency to its melodramatic plot. Bradley Cooper’s directorial debut is a beautiful showboat of cinematic achievement.

The film is stocked with a wonderful ensemble who richly detail their respective characters. Bradley Cooper is the best he has ever been as the washed-up country auteur (not stadium popstar) who is hell-bent on destroying his life with pills and alcohol, as he is rapidly approaching the twilight of his career. He is in limbo between burning out and fading away. Lady Gaga is a marvel in her most mature screen performance to date. While watching her performance, it is insane to think that there hasn’t been a filmmaker prior to Cooper that has tapped into her raw talent and beauty on screen. Sure, her metamorphosis as a live performer is one thing, but her screen presence is something completely different; it is a sight to behold.

Aside from the two showstopping lead performances, Sam Elliot and Andrew Dice Clay are respective counterparts to Cooper and Gaga. Elliot is the older brother who is Cooper’s handler, and the Diceman is Gaga’s father. Both bring their own on-screen gravitas to the picture, Elliot commands the screen in sobering moments as Cooper’s firm-handed father figure while Andrew Dice Clay is the affable and warmly supportive father of Gaga, offering quite a few appropriately humorous moments to the film. Elliot gives one of the finest and most vulnerable performances of his career, while Clay is consistently becoming a formidable supporting player since his scene-stealing performance in Woody Allen’s Blue Jasmine.

For all the conventionality to the film, it is rather perplexing with its unorthodox self-awareness of the casting of Andrew Dice Clay and Dave Chappelle (who gives a very sweet and touching performance). The musical performances feel genuine. They are photographed with a sense of urgency and emotion by cinematographer Matthew Libatigue (who also shot Sony’s Venom which bested A Star is Born opening weekend at the box office).

Bradley Cooper’s directorial debut is so grandiose, that he has poised himself to be the next Warren Beatty, Clint Eastwood, Mel Gibson or Robert Redford, having the ability to direct himself while creating a magnificent film that will remain relevant for decades to come. When the awards season dust settles, there more than likely will not be a more nominated film, and could very well sweep all the major awards. Regardless of Oscar buzz and cultural momentum, A Star is Born will stand the test of cinematic time and be remembered as a film that is filled with boundless love and passion.

Podcasting Them Softly is proud to present a chat with feature film producer BILL GERBER. Bill has some huge credits under his belt — Clint Eastwood’s GRAN TORINO and Jean-Pierre Jeunet’s A VERY LONG ENGAGEMENT are major feathers in his cap — and over the past 30 years he’s etched himself into the Hollywood landscape with a diverse background that includes work in the worlds of both film and music. Attracted to exciting material and excellent filmmakers, he spent time at the studio level working as an executive on both Oliver Stone’s JFK, Michael Mann’s HEAT, Clint Eastwood’s UNFORGIVEN and Curtis Hanson’s LA CONFIDENTIAL, before branching out as an independent producer with a first-look deal at Warner’s. Passionate, insightful, and beyond knowledgeable, we had a great time chatting with Bill, and we hope you enjoy!