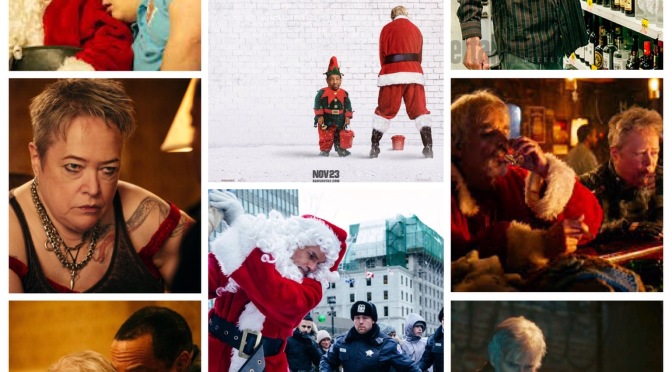 The holiday season’s best role model for children and adults alike makes a triumphantly sleazy comeback in Bad Santa 2, and I can honestly say this is one of those rare anomalous occurrences where the sequel outdoes its predecessor in almost every way. Where the first film was scummy, this one is scummier, the profanity nearly tripled and all manner of disgusting debauchery and deplorable behaviour dialled way past what we’re used to. Now a lot of folks will claim overkill, but honestly what’s the point in making a film like this if you don’t go for broke and puke up every last little cuss word and anal joke that comes to mind, particularly when it’s the sequel we’re talking about here. Billy Bob Thornton reprises what feels like his signature role, a piss poor excuse for a human named Willie Stoke, lowlife alcoholic dirtbag safecracker who masquerades as a department store Santa to rob malls blind, along with his flippant midget partner Marcus (ebony Oompa Loompa Tony Cox). This year they’ve taken a pickaxe to rock bottom and sunk even lower, aiming for a children’s charity reputed to rake in the Yuletide dough. Willie gets a surprise visit from his Ma though, an equally bitter, reprehensible diesel dyke piece of work played by Kathy Bates. You gotta hand it to the Bates-ter; this could have easily been a glorified cameo amped up just for trailers, but no, she goes all in and the extra mile to create a truly rotten bitch who almost…almost makes Willie the slightest bit sympathetic. This is one dirty, dirty film, one that milks it’s R rating like a two dollar hooker’s teat, so much so that it garnered the coveted 18a rating here in Canadian theatres, a medal not given out too lightly these days by our alarmingly lenient government. Nothing is sacred here, and I wouldn’t have it any other way in a film called Bad Santa. Christina Hendricks shits all over her classy image as the head of the charity, a slut in prudes clothing who just can’t help but play it dirty with Willie. The aptly named Thurman Murman (Vancouver’s own Brett Kelly) also makes a return, his stairs even farther away from the attic as he gets older. Replace holiday cheer with delightfully deviant black comedy, and loads of it, and you get a nasty, hedonistic little stocking stuffer like this. Just tread lightly if you can’t handle this type of humour, because it will tear you a new one. 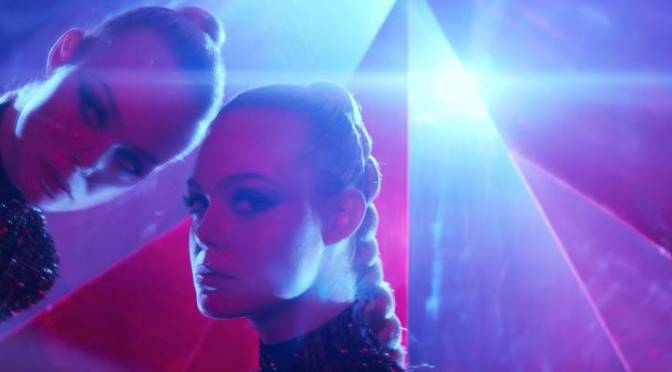 Nicolas Winding Refn’s cinematic progression is something to be marveled at.  With his latest film, THE NEON DEMON, he pushes every boundary imaginable, creating a film with so much impending doom that it will make the most unflappable cinephile become seemingly uncomfortable as his tale of vanity and debauchery comes to a brilliant conclusion.

Refn has reached the top tier brotherhood of self indulgent filmmakers featuring Lars von Trier, Terrence Malick, and Bob Fosse.  Making his own films, without having to concede anything to anyone, allowing his own unique kaleidoscope of artistic vision to wash over the screen.

This film is fantastic, and it is Refn’s best film to date.  His unbound storytelling is wrapped tautly by Natasha Brier’s fluid cinematography, a perfect ensemble, and one of the best film scores of all time composed by Cliff Martinez.

Refn’s cinematic world is dark and dangerous, vicious and surreal.  He monumentally cashed in on DRIVE, allowing himself the freedom to make the films that he wants to make, pushing the boundaries of cinema to new heights.  With THE NEON DEMON he forgoes star power and box office anchors, and makes a film so twisted it becomes incredibly serene in a way that would make Stanley Kubrick proud.

Every single actor and crew member deserves all the accolades in the world for their accomplishments on this film.  One could spend an entire essay talking about each actor in this film.

Elle Fanning.  Wow.  She absolutely commands every frame of this film.  Keanu Reeves completely shakes his on screen persona in a scummy and sleazy hard supporting role that will leave you wanting more.  Desmond Harrington FINALLY got his role.  He is silent, gaunt, and cathartic in his few scenes; showing off his previously untapped potential.

In an age where great cinematic story’s are told in a novelization over the medium of television; I don’t know how this film got made, or how it got a wide cinematic release – but we should all celebrate the fact that it did.