The Rainmaker is one of those journeyman courtroom dramas that’s isn’t all flash, sizzle and spectacle. There are those things periodically and in the obligatory final flourish but this is more a piece that shows the dutiful, unsung labour that goes into putting a deposition together, the many hours of stress involved in taking on a class action lawsuit and for once, a quality I admired, focuses more so on the victims who are suing rather than the lawyers themselves in terms of character. Based on a John Grisham novel and directed by a fellow you may have heard of called Francis Ford Coppola, it stars Matt Damon in a humble, restrained turn as rookie lawyer Rudy Baylor, riding on the coattails of amoral hustler guru Bruiser Stone (Mickey Rourke) and backed up by perennial sidekick Deck Shiffler (Danny Devito). Stone’s firm (if you can call it that) is an unabashed ambulance chasing racket until Rudy stumbles into some genuine high stakes cases that matter, namely a lawsuit against an insurance giant for denying treatment to a boy (Johnny Whitworth) dying of leukaemia. This puts Rudy and Deck up against a top dollar team of legal talent led by preening shark Jon Voight, the kind of soulless muckraker who gets ruffled at the very mention of the fact he’s sold out to the wrong side. Also along for the ride is battered housewife Claire Danes, whom Rudy takes a liking to and wishes to protect against her monster of a husband. It’s a fairly sprawling tale with an impressive amount of characters all juggled handsomely, not to mention a dense narrative that is somehow delivered to us breezily and coherently. But character is key here and ultimately wins the day; DeVito is terrific as the chow mein guzzling little curmudgeon who initially comes across as a sleaze but quietly, ever so subtly peels back a hidden and unobtrusive later of compassion as the story draws you, and him in. Rourke is priceless, chain-smoking, chewing dialogue and literally walking out of the film a third of the way through to some tropical beach where he delivers key information over the phone before returning to his all your can drink margaritas. Voight is cold, steely and blusters without getting hammy, something he’s always somehow been able to tightrope pretty damn well. Danny Glover is great as a sneakily idealistic judge, Dean Stockwell as a short lived and quite cantankerous one and watch for vivid supporting turns from Mary Kay Place, Teresa Wright, Red West, Randy Travis, Roy Scheider as the leathery, evil insurance CEO and a scene owning Virginia Madsen as a terrified whistleblower. I greatly enjoyed this because although it’s a big budget, star studded Hollywood courtroom drama, it takes its time, is leisurely paced, lived in, meticulous about character development, sincerely cares and has compassion for the humans who are scared and hurting within its narrative and tells several interwoven stories, all well worth your time and attention. Great film!

Ever had one of those days where literally everything seems to go wrong and there’s some kind of invisible cosmic force aligned against you? Sean Penn’s Bobby has one of those in Oliver Stone’s U Turn, a deranged, sun drunk parable by way of neo-noir and near Boschian displays of brutal human behaviour punctuated by pockets of the blackest comedy one can find. This is a deliberately, brutally unpleasant slice of nihilism that wouldn’t be easy to swallow were it not so fucking funny, so gorgeously visual, so perkily acted by the knockout ensemble cast and so beautifully scored by Ennio Morricone. Penn’s Bobby has the rotten luck of breaking down in the one horse town of Superior, Arizona, where bumpkin mechanic Billy Bob Thornton takes his sweet time patching up the rig, leaving him to drift about town and get in all sorts of trouble. There’s a rockabilly maniac named Toby ‘TNT’ Tucker (Joaquin Phoenix) who wants Bobby’s head for ‘making time’ with his girl (a loopy Claire Danes). The menacing local Sheriff (Powers Boothe) seems hellbent on doing anything other than protecting and serving. Jennifer Lopez is sultry babe Grace, who snares him up in a dangerously lurid love triangle with her husband Jake (Nick Nolte at his utmost Nick Nolte-iest), who also happens to be her stepfather (!). This all boils into a mucky miasma of murder, violence, sex games, insurance fraud, gas station robberies, betrayal, severed limbs, manipulation and any other noisy calamity you could think of to befall a small town in Arizona that the rest of the world has seemingly forgot. Bobby is on the run from a scary Vegas loan shark (Valery Nikoaelev), but nothing he can do compares to the level of hurt these warped townsfolk inflict upon him, so it’s kind of an out of the frying pan into the fire type scenario. The thing is, Bobby himself is something of a reprehensible scumbag anyways, so there’s a cheeky masochist edge in watching him traverse this dusty, 9th ring of Americana hell and circle an ending of inevitable doom. ‘Treat others how you wish to be treated’ is an adage that almost every single character in the film seems to have sadly forgotten or chose to ignore except one individual, a blind old native man played with disarming truth by Jon Voight. Bobby has several encounters with him, and he’s the only one who isn’t after something, doesn’t display hostility or unkindness, he speaks plainly and offers Bobby bitter pearls of wisdom that ultimately go unheeded. Stone employs the same type of jittery, whacked out visual surrealities he used in Natural Born Killers, a deeply saturated colour palette, tumble dry editing techniques and more breathe life into this vivid version of curdled small town life in the vast, lonely desert. Morricone’s score is a spring loaded jack-in-the-box in areas and a melodic, melancholic lullaby in others, an underrated composition that gives the film an eerie sadness and zany vibration all it’s own. There’s more going on than meets the eye here; at surface level it’s a dark crime comedy with a quirky edge, but both Voight’s character and a few mysterious hints at Lopez’s backstory with the tribes in the region hint at a deeper, darker sense of malice lurking out there with the coyotes, suggestive of an almost mythic aspect. Stone gets high praise for his political dramas, but I’ve always loved him best when he’s doing genre stuff, he’s such an expressive storyteller and the real fruit of his imagination comes out when he’s turned loose. For me this is his second finest work after Natural Born Killers and before Savages, the three films that seem most genuine and celebratory of the medium. In any case, U Turn is a southern fried, asphalt laden, angry, sexy, perverse road trip to sunny noir heaven or hell, and a masterpiece. Watch for neat cameos from Laurie Metcalf, Bo Hopkins, Brent Briscoe, Julie Hagerty and Liv Tyler. 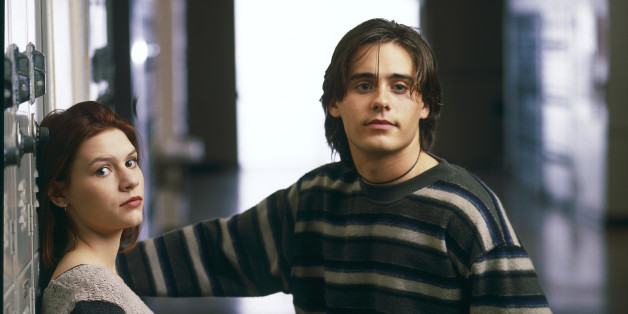 When My So-Called Life debuted on television in 1994, it was seen as a smart alternative to mindless teen pap like Beverly Hills 90210. I don’t know about you, but I didn’t know anyone like the “teens” (just how old were the actors anyway?) on that show. In comparison, the kids on My So-Called Life were awkward, vulnerable and, most importantly, real. All of the characters on this show acted like actual people. Sure, the writing, at times, was a little too touchy-feely and bleeding heart liberal for its own good – the influence of Thirtysomething’s Mitchell Herskovitz and Ed Zwick – but its observations about teenage life (and life in general) and the many melodramas that make it so difficult were right on the money.

Angela Chase (Claire Danes) is a nice girl still figuring out who she is as she pines after the dreamy Jordan Catalano (Jared Leto) who, initially, barely knows that she exists. Angela is friends with party girl Rayanne Graff (A.J. Langer), the openly gay Rickie Vasquez (Wilson Cruz), Sharon Cherski (Devon Odessa), who used to be Angela’s best friend but has since been replaced by Rayanne, and the awkward Brian Krakow (Devon Gummersall) who secretly has a crush on Angela. In the first episode, Angela dyes her hair crimson as an act of rebellion against her mother (Bess Armstrong) who tries so hard to understand her daughter but doesn’t have a clue what she’s going through. Her father (Tom Irwin) is a nice enough guy but also equally clueless about his daughter’s day-to-day trials and tribulations. Angela’s parents are both liberal-minded people who were probably Hippies in the 1960s, grew up and bought into the system while still retaining their liberal sensibilities.

One of the great things about the show is how the writers flesh out the characters and the relationships between them. The conflicts that Angela has with her mother are spot-on and have a real ring of honesty to them. Rayanne’s self-destructive, partying ways are addressed in one episode. In another, Rickie comes out to his relatives and is kicked out of the house by his abusive uncle. The seemingly perfect Jordan turns out to be flawed as we find out in one episode that he can’t read or write.

There are so many stand-out episodes (let’s face it, they are all good), like the one with Angela’s substitute teacher (played to perfection by Roger Rees) who inspires her to think outside the box. However, she becomes blind to his flaws by his dynamic charisma. Arguably, the best episode is the Christmas one where singer/songwriter Juliana Hatfield plays a homeless person that Angela tries to help. It’s a truly moving episode as materialism and the commercial aspects of Christmas are rejected in favor of family, friendship, and selfless acts of kindness.

Looking back at it now, My So-Called Life is a wonderful snapshot of the mid-1990s with the hairstyles and the clothes (you can even spot an REM poster in Angela’s bedroom) distinctive of that decade prominently on display. One can now look back at this decade through nostalgic glasses via this show. Despite its brief run, My So-Called Life not only helped launch the careers of Claire Danes and Jared Leto, but without it there would be no Freaks and Geeks or Joan of Arcadia or Gilmore Girls, which also presented smart and sensitive teens in a realistic way. Both of these shows also had brief runs which seem to suggest that American viewers favor escapist fare like The OC and not heartfelt shows like My So-Called Life.