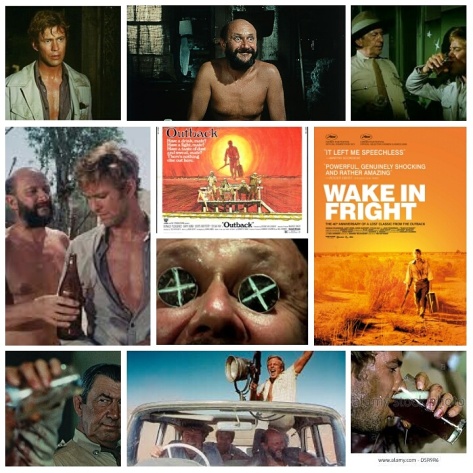 Wake In Fright is like one of those clammy nightmares where you are stuck in some godawful place full of ugliness and depravity, and try as you might, you simply can’t escape or outrun the horror around you. Such is the plight of John (Gary Bond) a schoolteacher in a desolate county of the Australian outback, on his way to Sydney for a little R&R on winter break. His journey takes him to a pit stop in Bundanyabba, an ass backwards mining town in the middle of the middle of nowhere. He stops by the bar, where the leathery sheriff (Chips Rafferty) offers to buy him a beer. And another. And another. And another. You see, the Yabba is such an isolated doldrum of a place that it’s inhabitants resort to extreme alcoholism on a daily and nightly basis, which combined with their sun baked brains leads to some harrowing displays of excessive and whacked out behaviour, that poor John comes face to face with. It’s funny that his last name is Bond, because he has the air of sophistication akin to our dear old 007, and it clashes with these yowling yokels like baking soda and petrified vinegar. His composure starts to creak as each pint of lager cascades it’s way down his esophagus, until the line between civilization and primal Instinct starts to scare him. But is it too late by then? He somewhat befriends Doc Tydon (Donald Pleasence) a raging drunkard who hangs around with a group who do nothing but drink, howl like lunatics, fight and hunt kangaroos. Pleasence is transfixing as a once cultured man of medicine whose soul has been drenched in the endless consumption of beer and calcified by the mad, acrid sun, until the whites of his eyes begin to reveal the decay beneath. The scenes of alcohol drinking in this film are staggering, frequent and very, very disturbing. The lonliness has bred this behaviour and these people know nothing else but inebriation and idle time wasting, their lives reduced to one long episodic bout of day drinking and nocturnal revelry. John veers eerily close to falling directly in line with them and going to far down that path, especially during a nighttime kangaroo hunt that serves as some perverted form of an initiation ritual. I must warn you: not only are the hunting scenes very, very graphic, but they’re completely un-staged. The adage “it’s just a movie” doesn’t apply to these sequences, and the carnage we see unfold is horrifying geniune. The hunts were supervised by the Australian government and conducted in an overpopulated area by experts. None of that makes them any easier to watch. This film serves as an anthropological treatise on what happens to human beings who live in the farthest and most remote corners of the world, left to their own devices by seclusion and time, relegated to near animalistic states that to them is just another day in the Yabba. Billed as a horror film, but the horror comes solely from the human elements, which to me is always far scarier. Deliverence ain’t got nothing on this baby, and we’re lucky we even got to see it at all. Some years after the film’s bitterly received release (Australians were pissed at the depiction of their people, and probably stung deep by the truth of it) it disappeared so far into obscurity that all prints seemed to be gone, and the consensus was that it was lost forever. One day the editor was cleaning his garage on the very day he was going to liquidate everything he didn’t need, and found a single print. This was nearly twenty years after the film’s release, and today you can watch it on netflix Canada. Quite the story, quite the film. Just strap on a thick skin, it’s a sweaty, dusty, boozy rollercoaster that dips to the very rock bottom of the human condition.