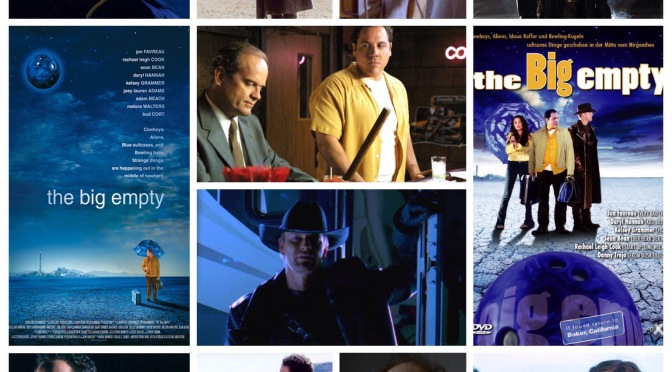 The Big Empty is a quirky, off kilter little flick that packs a backpack full of borrowed elements from the Coen brothers and David Lynch, before embarking on a perplexing outing into the Twilight Zone. That’s not to say it rips any of these artists off, and indeed it’s got a style and cadence all its own. It just loves other oddballs before it and wants to wear it’s influences proudly. Everyone’s favourite lovable schlub Jon Favreau plays John Person, a flailing, out of work actor. He’s presented with a dodgy proposition by his whacko neighbour Neely (eternally bug eyed Bud Cort). Transport a mysterious blue briefcase to a remote town in the Mojave Desert called Baker. There he will meet a much talked about, little seen individual called The Cowboy (Sean Bean), who will take the case off his hands. He agrees, as he must in order for us to have a film to watch, and heads out to the back end of nowhere. In any respectable piece like this, the town our hero visits must be populated by weirdos, eccentrics, dead ends, missed encounters and an abiding, ever present atmosphere of anomalous peculiarity. Right on time, he meets a host of charming characters, including Grace (Joey Lauren Adams), her sensual daughter Ruthie (Rachel Leigh Cook), Indian Bob (Gary Farmer), grouchy FBI Agent Banks (Kelsey Grammar), and a bunch of others including Daryl Hannah, Melora Walters, Jon Gries, Brent Briscoe, Adam Beach and Danny Trejo. He’s led from one head scratching interaction to the other, each step of the way proving to be a step behind the elusive Cowboy, with no form of coherence appearing to ease poor John’s bafflement. I was reminded of Jim Jarmusch, particularly his masterpiece Dead Man, perhaps because Gary Farmer appears in both, but most likely mainly due to the fact that both films follow a hapless Joe on a journey that doesn’t seem to be going much of anyplace, but holds interest simply by being bizarre enough. Favreau is the only one that doesn’t fit, the outsider whose laid back suburban affability creates friction with almost every individual he meets, all who seem to have wandered in from the outer limits of some other dimension. Sean Bean is relaxed, mercurial with just a dash of danger as The Cowboy, quite possibly the strangest person John meets. The film has unexpected jabs of humour too, which occasionally breach the surface of its tongue in cheek veneer of inaccessibility. Upon meeting Indian Bob, John inquires: “Are you Bob The Indian?”. Bob jovially retorts “No, I’m Lawrence the fuckin Arabian.” Gary Farmer brings the same cloudy, sardonic cheek he brought to the role of Nobody the Indian in Jarmusch’s Dead Man, which had much the same type humour as this one: little moments of hilarity buried like treasures amongst the abnormal. Sometimes I muse that films like these which seem to really go nowhere in high style are there simply to give your brain a workout in odd areas that it wouldn’t normally play in. Set up a voyage like this, lead the audience down a yellow brick road and arrive at.. well basically nowhere in particular, just to chuckle at your efforts to figure it all out, jab you in the ribs and say “Don’t take this shit too seriously, man!”. Or maybe not. Maybe there’s deeper meaning behind the meandering, that will reveal some holy significance. This one, though, I doubt it. It’s pure playtime.