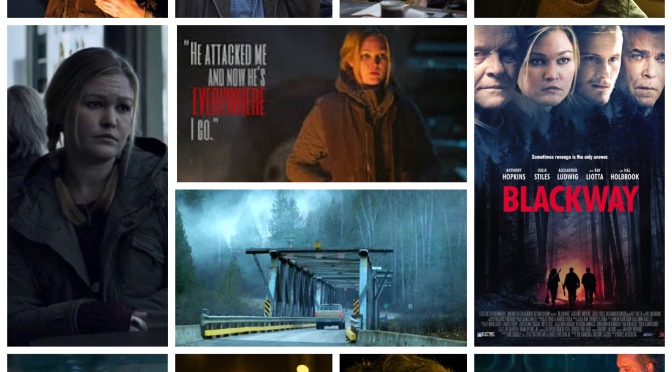 Daniel Alfredson’s Blackway (aka Go With Me) is a bizarre disaster that would have made for a cool flick if… well if it didn’t turn out so darn shitty. I suppose you could blame editing, there’s elements that work, some decent performances and genuinely terrific photography but I’m not sure what they were going for in terms of tone and story because it’s an unholy mess. Anthony Hopkins is always a welcome presence, but he has a silly habit of sleepwalking through roles that he’s clearly only taken on to grab a buck (that twitter video of him spazzing out to music in his living room had more charisma than he musters up here), and although he never fully phones it in, there’s a somewhat listless lack of clarity in a lot of his later career work, this included. He plays an ex logger here with tragedy in his past, living the quiet life in the Pacific Northwest, until trouble brews in his small lumber town. Julia Stiles plays a new waitress in town who catches the eye of titular Blackway (Ray Liotta) an ex cop turned powerful crime lord with a hefty anger problem, violent tendencies and an overall scary reputation. He stalks, harasses and won’t leave the poor girl alone, and since he owns the pitiful excuse of a local police force there’s not much she can do but run and seek help elsewhere, supplied by Hopkins and a few of his pals including Alexander Ludwig and Hal Holbrook. If I was a powerful producer with the clout to green-light projects and you pitched me a noir-esque stalker thriller with Hopkins, Liotta and Stiles set in the Northwest I’d chuck my wallet at you and give my blessings. I’d later learn a hard lesson though, because as well as this looks on paper, or rather the alluring one sheet and exciting trailer, it really tanks and blows just about all of its potential. Stiles is always fantastic, she’s one of my favourites and can do no wrong in my book, she shines here. Liotta is a master actor and does a truly terrifying villain turn but he’s sort of in the wrong film. He has a big city gangster vibe that’s decidedly urban and bereft of the rustic trappings you need to pull off a mythic mountain man kingpin, and as such he feels out of place despite his great talents and considerable efforts. There’s a few decent set pieces like a face off at Blackway’s backroads whorehouse, but this thing is paced so oddly it’s hard to keep up or care. Alfredson is an accomplished filmmaker who gave us the original Lisbeth Salander trilogy, but I think he tried too hard to make this into something of an art film or really mean something when in reality there’s nothing more than a painfully average thriller. Worth it for the actors and the drop dead gorgeous scenery (I will forever be a sucker for films shot and set in this region), but other than that it’s a big swing and a bigger miss.