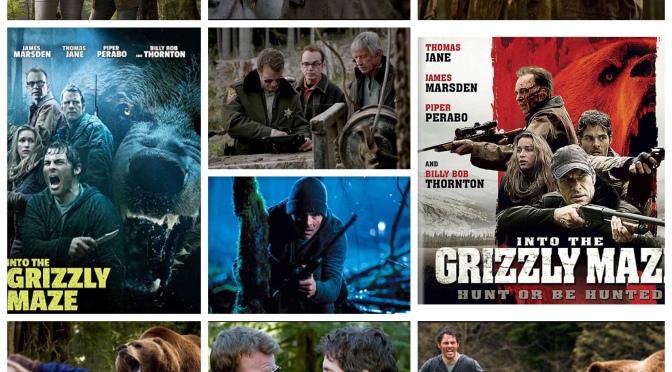 I’ve never seen potential, cast and atmosphere so wasted like I did in Into The Grizzly Maze, there’s just no excuse for dicking up such a great premise like they did here. Originally titled Red Machine, which is way better anyways, it concerns various characters chasing down a monstrous rogue grizzly bear somewhere in the Pacific Northwest (actually Vancouver, naturally). These folks include ex con James Marsden, his park ranger brother Thomas Jane, Sheriff Scott Glenn, poacher Adam Beach and miscast Billy Bob Thornton as some sort of guru bear hunter. The character and writing are almost all flat, which amazes me because I’d be hard pressed not to write at least some engaging dialogue for a cast this badass, but nope. Marsden is as bland as sandpaper, Jane seems bored to tears, Thornton is so misplaced even his coat looks uncomfortable, Glenn is more grizzly than the bear but is underwritten, while Piper Perabo has a classic thankless chick role that’s beneath her talents. Seemingly immortal actor Bart The Bear is used effectively here but he can’t carry a film on his own and as a result the only truly memorable things are the beautiful locations and a particularly gruesome bit of makeup where half of Thornton’s face is literally slashed to ribbons, nice touch that. This seems to be a vague rehash of a 70’s bear flick that, from the looks of it, is probably eons better than this TV movie level garbage. Shame, as we’ll probably never see this cast together again. Avoid.