Jack Reacher: Never Go Back isn’t the thunderclap thriller the first one was and considerably diminishes from a large scale epic feel to something more small, comforting and TV movie style, which is not say that’s a bad thing as I quite enjoyed it, I just wasn’t riveted and amped up like I was the first round. It’s interesting that director Edward Zwick stepped in as he’s usually accustomed to large scale, sweeping epics (Legends Of The Fall, Courage Under Fire, Blood Diamond, The Last Samurai, Glory) and instead went for something smaller here, but it works.

Tom Cruise’s nomadic badass Jack Reacher is still out there looking for people who cause trouble so he can cause it tenfold back upon them and as the film opens we see him take down nasty small town sheriff (Jason Douglas) turned human trafficker using only a payphone. That sets the tone for another raucous adventure that is decidedly not as ruthless or brutal as the first, but takes a more compassionate tone which is an interesting decision that I really liked as it allows us to see the softer side of this character. Jack has a liaison in the military called Major Susan Turner (Cobie Smulders) who feeds him intel and he’s taken a liking to her enough to ask her out, but when he arrives in Washington to do that he instead finds her smug superior officer (Holt McCallany) sat at her desk informing him that she’s been arrested under charges of espionage. This doesn’t quite sit well with Jack and after beating the shit out of him for answers, he launches a violent inquiry, tracks Major Turner down and helps her clear her name and vet out a conspiracy within the military.

This film works well because of that relationship between the two, and the terrific chemistry that Cruise and Cobie have. They serve as both romantic leads and partners in action and provide the story with a warmth that wasn’t there in the first, as the relationships there felt a bit cold and detached. There’s also a mysterious girl (Danika Yarosh) who may in fact be Jack’s daughter from a wife years back, and that adds a human side as well which was welcome. On the weaker side, the action set pieces aren’t as ingenious or as memorable as before, and the villains not as charismatic or well painted. It is hard to top Werner goddamn Herzog though so I feel their pain. McCallany is nasty enough as a classic bully and Robert Knepper sneers and snarls as an evil private security Colonel but he shows up so late in the game it’s hard for him to make a real impact. What does work works really well though, and Smulders is the best thing the film has going for it. She’s a true star that never mugs the camera but always feels sympathetic and engaging, not to mention gorgeous. Not the film the first was, but a fun time all the same. 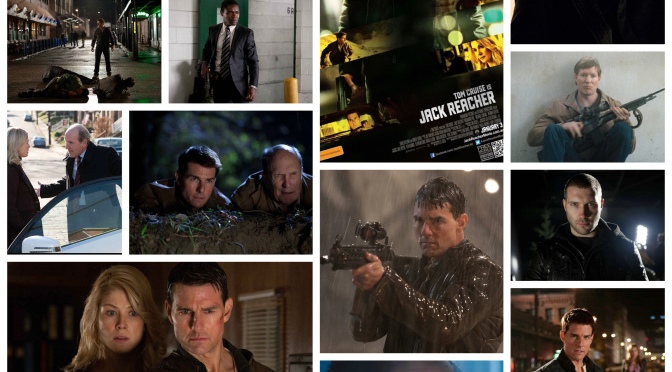 So I get that Tom Cruise isn’t over six feet tall and doesn’t look like an ex marine biker type tough guy, but that doesn’t stop Christopher McQuarrie’s Jack Reacher from being a lean, mean, badass fucking film and one hell of an effective, tightly written thriller. Now, I’m not a huge disciple of Lee Child’s books nor have read a single one of them and therefore don’t have beef with Cruise in the role, in fact I like the steely, unflappably calm violence he brings and believed him as this outlaw ex military renegade warrior, but I can see hardcore literary fans being a trifle pissed.

Anyways, McQuarrie paints a propulsive, brutal world that Reacher exists in, full of sociopathic mercenaries for hire, mad dog war veterans out for the kill and deep rooted corruption in almost every facet of the government. Reacher, existing outside of said institutions, is free to use any force or tactic necessary to smoke out evil and restore the balance, and believe me this guy does not fuck around, but to his credit, gives fair and ample warning to anyone in his way before he beats the piss out of them. The film opens with a harrowing public shooting perpetrated by some ghost operative (Joseph Sikora) employed by shadowy factions we can’t even imagine. The act seems random but of course isn’t, and Jack breezes on in to untangle a terrifying web of dark deeds and malpractice in echelons most high. Rosamund Pike is excellent as a government figure who may or may not be on his side, as is Richard Jenkins as her high ranking father who also might (or might not) be up to all sorts of no good. David Oyewelo, Jai Courtney, Josh Helman and Robert Duvall all provide solid supporting work.

The real treat and scene stealer here though is legendary filmmaker Werner Herzog cast as a terrifying arch villain known only as ‘The Zec.’ Dressed in black with half his fingers missing, blessed with that milk over mercury voice only he has and with a penchant for inflicting heinously ruthless torture and punishment on his own cohorts, this is one villain that I wouldn’t want to come across anywhere, it’s a fantastic portrayal and he’s clearly having a blast. This is one of the rare times where I’ll concede and say that an action film works with a PG-13 rating. Usually it limits creativity and dulls any edge a thriller might have but here McQuarrie has still somehow made this thing feel genuinely dangerous, edgy and mature. It’s a brilliant thriller with several set pieces designed for maximum impact, a smart script with just enough eccentricities peppered throughout the dialogue to stick. Cruise has a lot of fun to, whether he’s taking a bar brawl out into the street and putting several dudes in wheelchairs at once or engaged in nasty, bone smashing hand to hand combat with any of the many spooks out to get him. Love it. 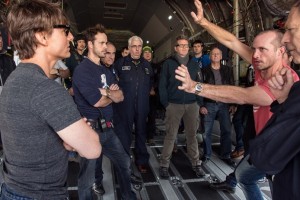 Podcasting Them Softly presents an explosive chat with Stunt Coordinator and Second Unit Director Wade Eastwood! Wade has an extensive list of credits on some of the biggest blockbusters of the last 15 years, including the latest Mission: Impossible entry, Rogue Nation, the upcoming James Bond adventure Spectre, 2014’s Interstellar, Godzilla, and Edge of Tomorrow, and numerous other high-throttle action films that have featured some of the most dynamic stunt work in modern cinema history. A true dare-devil at heart (he’s also a stunt driver and performer), we had a great time chatting with Wade, and we hope you enjoy!