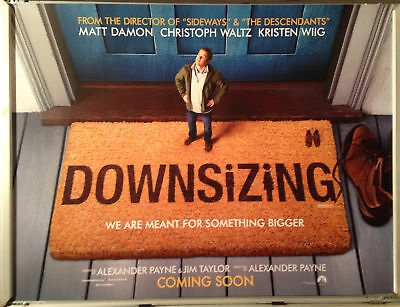 I really don’t understand the bad mojo this wonderful film gets. There’s a handful of films out there where humans either shrink themselves or are subspecies that are already small and many approaches have been made from wacky Big Hollywood comedy (Honey I Shrunk The Kids) to quaint whimsy (the varied adaptations of Mary Norton’s The Borrowers) to glib SciFi (InnerSpace) and beyond. Alexander Payne achieves something unique to its being in Downsizing though, a film that doesn’t fit any pre-existing template and sits squarely in unexpected terrain.

It’s the future, but there’s still Longhorn Steakhouses and as Matt Damon’s Paul picks up dinner from one he sees a world changing new broadcast: scientists have successfully shrunk a human being down to tennis ball size. Fast forward a few years and it has become an institution in which people undergo the treatment and live at their itty bitty size in utopian bliss to reduce impact on the environment. Paul goes for it, his wife (Kristin Wiig) has second thoughts and he’s now alone in the world at roughly the size of a rodent. He makes quaint friendships with the two adorable Eastern European hedonists (Christoph Waltz and Udo Kier sheepishly steak the show) who live next door to him as well as the Vietnamese maid (Hong Chau) who cleans their pad. The film meanders, and refreshingly so as we languidly get to know this ragtag team of tiny folk and join them on a wistful international voyage to explore the origins of this strange breakthrough. Others breeze in and out in a surprisingly eclectic supporting roster that includes Laura Dern, Jason Sudeikis, Rolf Lassgard, James Van Der Beek, Neil Patrick Harris, Don Lake, Margo Martindale and Joaquim De Almeida. I love Damon’s character because he’s just this naive average dude and, as Waltz sneakily puts it, kind of a schmuck but in an endearing way. The relationship he blunders into with Hong Chau’s Ngoc is simultaneously bizarre, touching, hysterical and heartfelt. Theirs pasts are both terminally tragic in different ways and they couldn’t be more mismatched but it somehow works, and Chau’s fiercely funny performance is a thing of affecting beauty. It strikes me as odd that this film didn’t get received better and I don’t know what to chalk it up to other than it perhaps being pretty unconventional in terms of narrative and style. It feels like a cult classic in the making, it’s fresh, unpredictable and works in every venture it tries and trust me there’s a few. Everyone I’ve watched this with has left enchanted and I really hope it’ll endure as time goes by.