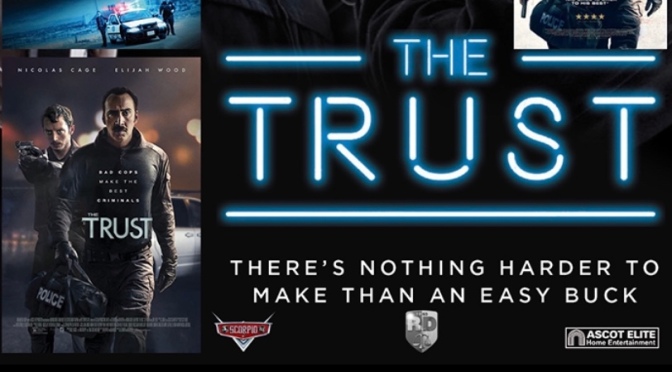 Finally a solid Nic Cage B flick!! I needed one and The Trust provides a great time as Nic and Elijah Wood play two sad-sack Vegas cops who decide to rob a mob safe house that’s several zeros above their pay grade. This is such a quirky little recipe, super casually paced yet efficient when it needs to speed things along, darkly comic, dangerous, loopy and easy breezy where it counts despite fizzling out a teensy bit in the last act when it should have turned the dial up to full spicy but we can’t have it all. Cage is the cavalier veteran cop who somehow doesn’t see the impending danger in their plan and does a fairly effective job of luring super nervous Wood into it, and yes it all goes violently wrong at one point but probably not as spectacularly as you’re hoping. They bust into an adjacent apartment, hold a girl (Sky Ferreira, almost unrecognizable and doing a great job with little dialogue) hostage and begin to drill below into the mysterious safe, all the while cracking weird jokes, chomping fast food and bickering like sixth grade buddies. That’s basically it, and while the thing is a brisk ninety minutes it still manages to feel laidback and laconic, probably thanks to a hilarious Cage who seems not to have a care in the world in one of his freewheeling, casually weird turns. Wood is a good choice for a nervous guy but he always freaks me out a bit, he’s 39 now and still somehow just comes across as a teenager in physical appearance and essence but he does a fine job that aside. Ethan Suplee shows up as a bored, shady detective with a penchant for Russian roulette and, curiously, the late great comedian Jerry Lewis randomly makes his final film appearance in a quick cameo as Cage’s father. This isn’t anything explosive or super unique and like I said, much of the film is eccentric buildup to a less than earth shattering resolution but there’s tons of welcome sarcastic humour, a nice jazzy original score and Cage subtly hams it to effect playing Vegas’s laziest and craftiest beat cop. Good times.

We talk about Scorsese’s most underseen film, THE KING OF COMEDY, as well as our top five Robert De Niro performances and our top five comedic performances of all time.  Both were tough lists!  Hope you guys enjoy!

Meet Rupert Pupkin – whose name is often mispronounced and misspelled.  He is an insecure, timid and dissolutional young man whose dream is to perform a guest spot on “The Jerry Langford Show”.  His psychopathic friend Masha is deeply obsessed with Jerry and after numerous failed attempts of Rupert going to Jerry’s office for a meeting – the two devise a plan to kidnap Jerry.

THE KING OF COMEDY remains to be the greatest Scorsese film that not many have seen.  It showcases Robert De Niro’s finest performance as Rupert, a wickedly hilarious psychotic performance of a lifetime by Sandra Bernhard as Masha and a steady cool and calm of normality that’s brought to the film by Jerry Lewis as Jerry Langford – a Johnny Carson late night host.

This film has a nice polish on it, it looks and feels light and breezy but under the façade this is a deeply dark and sinister film.  Rupert is so utterly delirious that his basement room is his Mother’s house is a mock studio with cardboard cutouts of celebrities where he performs in front of an invisible audience every night.  The film is incredibly funny – yet you find yourself wanting to look away at how terribly humiliating situations in the film become.

After failing to meet with Jerry at his office, Rupert invites a woman who was in love with in high school, and is now a local bartender, to join him for a weekend at Jerry’s home.  Rupert arrives at Jerry’s home and forces his way past the butler and maid.  He then begins to walk around Jerry’s house telling this woman all about Jerry’s achievements and his life – speaking as if he’s known Jerry for an eternity.  Once Jerry arrives home, he demands Rupert leave, he threatens Rupert with the police and begins shouting at him.  This is one of many, many situations in the film that is so painfully humiliating to watch we find ourselves wanting to turn away – but we can’t.  We are so mesmerized by the film.

This is film is the essence of black comedy, planting the seeds for future films.  Will Farrell’s character in WEDDING CRASHERS – the grown man living in his off screen mother’s basement who is constantly yelling at her.  THE KING OF COMEDY started that all.