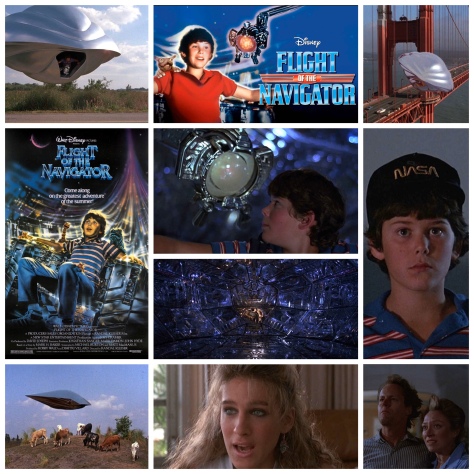 I feel like live action Disney stuff from the 70’s, 80’s and 90’s is underrated. The animated ventures always get minted into classics and go platinum while awesome entries like Flight Of The Navigator get lost and relegated to hidden gem territory after awhile. This is a smart, funny, charming, invigorating and refreshingly eerie little SciFi that doesn’t talk down to its young audience or wade into sap.

In 1978 young David (Joey Cramer) disappears walking through the woods one night, and isn’t seen for eight years until he walks up to his house and finds different people living in it. Here the film impressed me by showing this whole sequence from his blind perspective, because for him only about four hours have passed and he can’t figure out why when the cops track down his parents, (Cliff De Young and Veronica Cartwright are very effective) they have aged so much. Their reunion is treated maturely and with impressively adequate emotion from Cramer, who ever so slightly reminds me of a young Henry Thomas, therefore cementing the Amblin vibes nicely. David has of course been abducted by aliens but that’s no spoiler as you can see by the chromed up spacecraft jetting around on the film’s poster. The resident extraterrestrial who took him now returns and the two embark on an initially disorganized and frequently hilarious ‘mission’ to find star charts downloaded to David’s brain, evade a pesky NASA bigwig (Howard Hesseman) and return David to his family.

This film is a wondrous creation because of how laid back the action is. David teams up nicely with the alien, a rambunctious robotic arm named Max and voiced by Paul ‘Pee Wee Herman’ Reubens. Most of their time together isn’t spent lamenting the situation or blasting government troops with phaser beams but rather goofing off, rocking out to the earth music that Max takes to, hanging out with other alien specimens he has adopted in his voyages (cue the adorable 80’s practical effects) and zooming around the globe in their vehicle which provides some very good exterior FX too. A young Sarah Jessica Parker also shows up as a sweetheart of a NASA defector who watches out for David and eventually helps him escape. It’s a terrific film that doesn’t take itself too seriously yet doesn’t goof off too much and ruin setup and believability (I’m looking at you, Joe Dante’s misfire ‘Explorers’). It benefits greatly from Cramer who was a true find but doesn’t seem to have had much of a career following this. Greatly recommended.