Undercover Blues is about as light, breezy and fluffed out as a film can get, to its own detriment in fact. I love a good lighthearted comedy but unfortunately this one tries to be so carefree and leisurely that it comes across as… well just that, something that feels like it’s trying too hard to achieve it’s vibe instead of just naturally arriving there. Dennis Quaid and Kathleen Turner play former spies who are on vacation in New Orleans, trying to escape the espionage life for awhile so they can raise their baby. When a chance encounter with a hopeless mugger named ‘Muerte’ (Stanley Tucci in a performance that has to be seen to be believed) puts them in the spotlight of their former boss (Richard Jenkins) they are tasked with finding and taking down an easily distracted Euro-trash villainess (Fiona Shaw) who is selling plutonium rods to terrorists.. that’s the loose version anyways, the film doesn’t really have much of a grasp on the reins of its own plot. Pretty soon two dogged detectives are after them, played by Obba Babatunde and the always scene stealing Larry Miller who is doing a voice/accent here that is so bizarre he sounds like he walked out of the looney toons. There really isn’t too much romantic chemistry between Quaid and Turner save for one brief scene and for all their cavalier swashbuckling and attempts at charisma they seem curiously lifeless. Tucci is anything but though as this ridiculous petty criminal, barking out childish threats with a priceless Spanish accent and spicing up the proceedings with his coked up manic energy. Watch for familiar faces including Tom Arnold, Jan Triska, Marshall Bell, Dennis Lipscomb, Saul Rubinek, Chris Ellis, Olek Krupa and a very young Dave Chapelle. I wish I liked this more but it just didn’t have substance or anything to grab ahold of. It’s fine to have easy breezy, fluffy action comedies but there’s still gotta be an interesting story, strong character dynamics and a genuine sense of danger or I’ll just lose interest. This was a great big meh. If you want to see how an effective lighthearted New Orleans caper with Quaid is done, check out The Big Easy with him and Ellen Barkin, an absolutely wonderful romance cop flick that feels genuinely laidback without having to try SO damn hard to convince us it is, like this pot of watered down gumbo.

I love films that show human beings close to nature, eccentric conservationists and bold, idiosyncratic individuals who value the lives of animals and the wilderness above other humans, industry or infrastructure. Philippe Mora’s A Breed Apart is a fantastic example of this, of one reclusive army veteran with severe PTSD and a tragic past named Jim Malden (the late great Rutger Hauer) who lives alone on remote Cherokee island off the coast of North Carolina, devoting his life to the care, companionship and protection of birds and any other creatures he finds. He awkwardly flirts with the local general store owner (Kathleen Turner, switching up her smoky voiced socialite persona for something more casual and earthy) and bonds with her kid. He is fiercely protective of his land and the animals that dwell there to the point of inflicting mortal wounds with a crossbow onto two idiotic, nasty hunters (Brion James and John Dennis Johnston) who shoot birds illegally. Trouble arrives in the form of rock climbing adventurer Mike Walker (Powers Boothe) who has been hired by a weird, rich collector of rare bird eggs (Donald Pleasance channeling the Penguin from Batman) to pilfer the nest of rare bald eagles on Jim’s island, rendering that species extinct. Mike isn’t a malicious or cruel man and admits that the prospect bothers him but he’s been promised two hundred grand for his troubles that will go to funding an expedition in China that is very important to him. We then have this extreme battle of wills governed by moral principles, with both actors doing phenomenal jobs. Hauer is rugged and intense as ever, hinting at a mournful past and winning us over with his compassion for animals, whether washing oil spills off of a bird’s coat or playing with cute black bear cubs in his epic tree fort. Boothe is cavalier and brash at first but we get a sense of moral centre in him as his arc goes on, this could almost be considered ‘the other environmental protection film’ he did in the 80’s and played a good guy in alongside John Boorman’s masterful The Emerald Forest. It’s a a joy to see the two actors onscreen together and a neat precursor to Sin City two decades later, where they don’t share any scenes but play brothers. Now this film had a rough time in post production, many of the reels being lost, what they’ve done to piece it together works for the most part but there are a few pacing issues that aren’t easy to brush off, as well as some really cheesy sex romp stuff but I guess it was the 80’s after all. Still, it’s a beautiful film overall, looks terrific on the Shout Factory Blu Ray, has a wonderful electronic score by Maurice Gibb and is about something that I’m very passionate towards: the care and conservation of natural habitats at all costs, and the dire consequences befalling any greedy piece of shit person who tries to exploit them. Very good film.

It was an absolute thrill to sit and chat with Cheryl Wheeler, legendary stunt woman, stunt double, and stunt driver of the movie industry. She has been the stunt double for Rene Russo, Kathleen Turner, and Goldie Hawn.

Cheryl began studying Yoshukai Karate at 15 – coming from a family of mostly boys; she was forced to learn to hold her own. She started kickboxing when her instructor commenced training an amateur team. She has also studied Judo, Aikido, and grappling and trained for a while with kickboxer and actor Don ‘The Dragon’ Wilson, and is a three-time WKA World Kickboxing Champion

Beginning work in the film industry in 1987, Cheryl’s extensive filmography of stunt work in such films as Back to the Future Part II, Bird on a Wire, Die Hard 2, Lethal Weapon III & IV, Demolition Man, The Thomas Crown Affair and Charlie’s Angels. She was inducted into Black Belt Magazine’s Hall of Fame as 1996 Woman of the Year. She appeared on the cover and in a feature article in Black Belt Magazine in July 1997, and also received a Stunt Award for “Best Stunt Sequence” in the 2000 film of Charlie’s Angels.

I could honestly have spoken to Cheryl for hours – slowly traversing and delighting in the stories from all of the films she has participated in. We also chat about her involvement in The Martial Arts Kid 2 which she comes to as a producer with her long-time friends Don Wilson and Cynthia Rothrock.

It was a true pleasure, and I trust you will enjoy this fascinating interview with an awesome Hollywood veteran. Ladies and Gentlemen . . . Cheryl Wheeler. 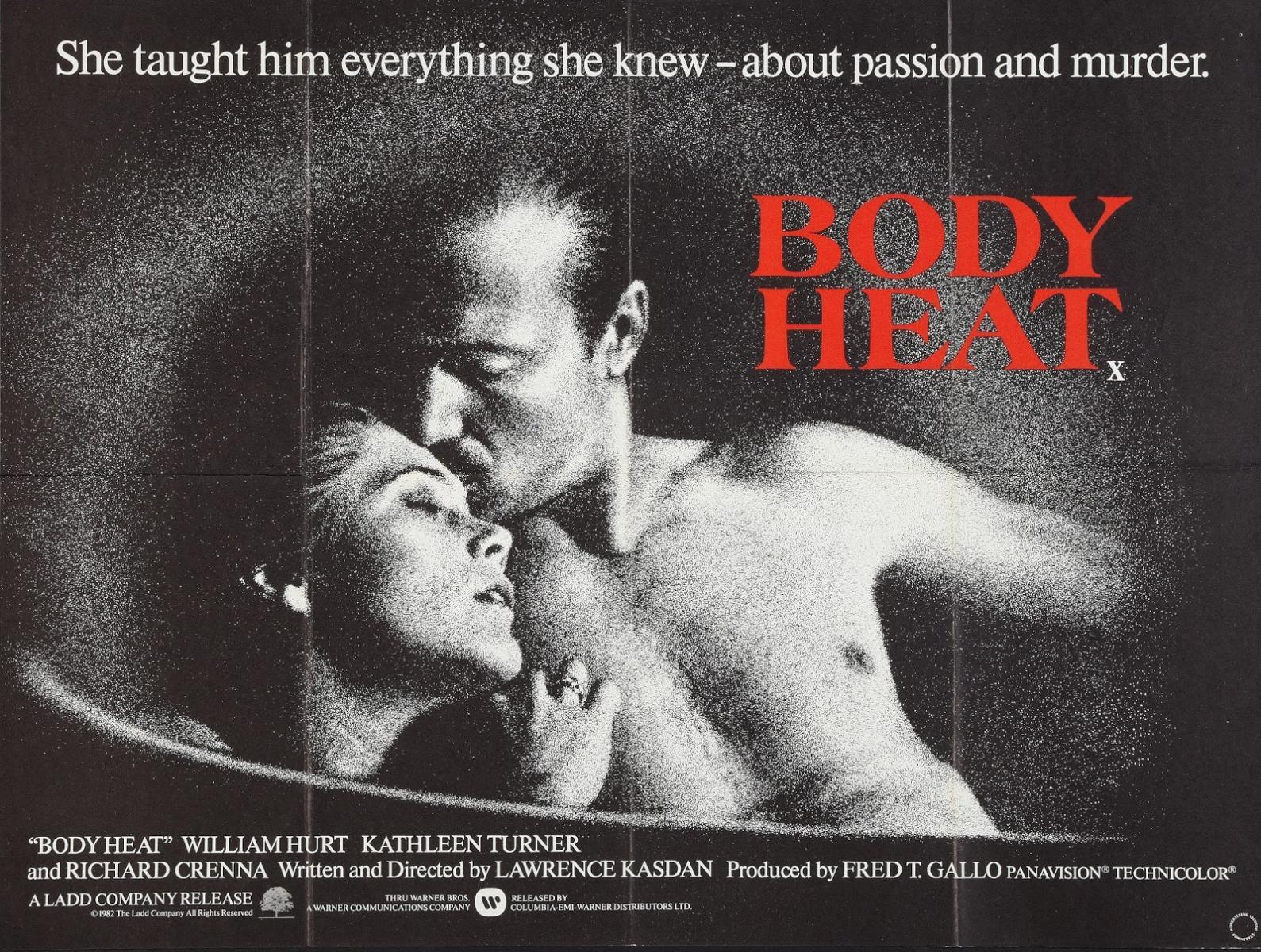 It’s a fascinating feature, it’s a soft remake of the classic DOUBLE INDEMNITY and was shadow produced by George Lucas.  Kasdan was able to roll all of his screenwriting star power into making his directorial debut with a film so sexy and steeped in noir, that it remains cinematic classic.

William Hurt and Kathleen Turner’s chemistry in the film is so powerful, that you can instantly feel and relish in their sexual tension.  Hurt’s character progression is remarkable; he starts out as the seedy lawyer and then he’s the alpha male in heat, then he’s the lover who will do anything for Turner, and then he ends up as the ultimate chump whose lust completely blinded him from the telegraphed motives of his obsession.

Yet without John Barry’s remarkable score, this film would not be nearly as powerful and sexy as it is.  The sexy jazz score with an abundance of saxophone truly accentuates the mood of the feature.  It is easily one of the best film scores of all time.
The picture is stocked with wonderfully memorable supporting performances from Richard Crenna, Ted Danson, and Mickey Rourke in his breakout role singing along to Bob Seger.  The film also found it’s way into Cormac McCarty’s screenplay for THE COUNSELOR, in a scene between Brad Pitt and Michael Fassbender, Pitt cautions Fassbender by recalling a scene between Rourke and Hurt.

After all, this film is a very heavy cautionary tale about lust and more importantly, obsession.  When we latch onto an obsession with such velocity and abandon any sense of reality, there’s a very good chance that we’ll burn ourselves down in our own fiery passion, and that’s exactly what William Hurt does.