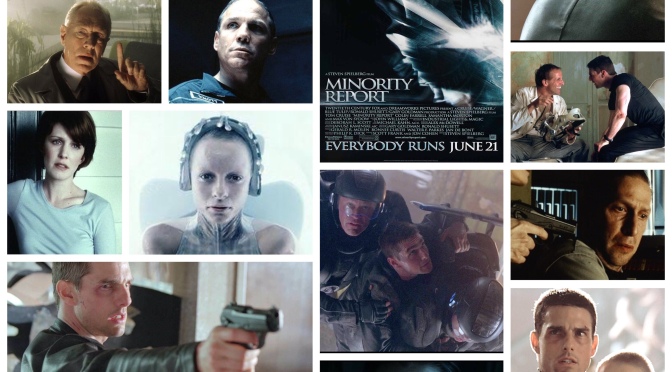 Few films successfully balance story, character, emotion, action and special effects on a scale as grand as Steven Spielberg’s Minority Report, which I saw for the first time last night and am still reeling from. It’s brilliant, intelligent science fiction, a labyrinthine murder mystery, complex detective story and a thunderous action movie all rolled together in a perfectly pitched recipe, probably as close to flawless as you can find. Based on a short story by Philip K. Dick, Spielberg world-builds fantastically around the concept of ‘Pre-Cogs’, neurologically damaged clairvoyants who can predict murders before they happen and have been put to work in Washington DC of 2054, where Lexus hover cars jet along vertical freeways, mad doctors replace eyeballs in a grimy shanty town flophouses, holograms dance about and there hasn’t been a single murder in six years, which is all about to change. It’s a startlingly complex, succinct version of the future where every bell and whistle serves the story instead of being simple gaudy arbitration to flaunt the studio’s money showboating across the screen. Tom Cruise gives a focused, implosive turn as John Anderton, chief of the high tech PreCrime unit, tasked with taking the PreCog’s readings and implementing force to ensure that these future murders never take place, that is until his very own name comes down the tube and he’s propelled on an odyssey to clear his name, smoke out elusive corruption and put ghosts of the past to rest in several different cases. Talk about an eclectic cast of actors supporting him, with standouts including Max Von Sydow as the grandfatherly director of the program, Lois Smith as an eccentric botanist with ties to the past, Kathryn Morris as Anderson’s intuitive ex wife, Colin Farrell as a sharp federal agent who both hinders and helps Anderton’s cause, Peter Stormare positively devouring scenery as aforementioned mad doctor, Tim Blake Nelson as a chatty prison warden, Neal McDonough and Patrick Kilpatrick as fellow PreCrime cops and Samantha Morton who almost walks off with the film in an arresting portrayal of angelic, animalistic PreCog Agatha, whose gifted brain holds power to unlock the past. The central mystery of the film is deep, broad and filled with hairpin turns you don’t see coming, it’s noirish in the way it unfolds but slick and streamlined in design, like all the best retro futurism I can think of, this now included. Better still is the fierce, uncompromising emotional centre where it finds gravity, particularly in a heartbreaking scene where Agatha enlightens John and his wife to their own pain, hers and that of those in the past she is trying to find retribution for, it’s a devastating sequence of blunt truth and unfiltered compassion that resonates beautifully from Morton, Cruise and Morris who all nail it. What more can I say? Roger Ebert said it best when he wrote that this film reminds us why we go to the movies in the first place, and I agree. I was attentive, rose up to met the narrative with my focus and always felt entertained by both the large scale fireworks and careful mechanization of story. Masterpiece. 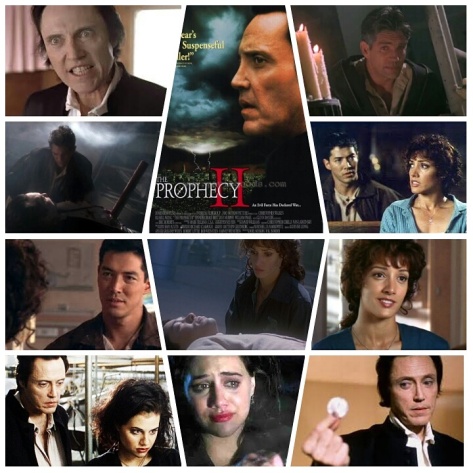 The Prophecy II continues around the same time the first entry left off, and while it’s not the same haunting, unique genre poem they managed with their first crack at it, it’s still got a few terrific things going for it, namely Christopher Walken. The guy is just charisma incarnate, and the implosive work he puts in as an angry, bitter Angel Gabriel in this franchise is some of the best I’ve ever seen from him. Gabriel is once again out to harm the humans, or ‘monkeys’ as he dryly puts it. The story is as murky as any self respecting Dimension films horror sequel should be, but from what I remember, an innocent human woman (Jennifer Beals) is impregnated by some sort of demi-angel named Danyael (Russell Wong), and the resulting birth will give humanity a kind of savior. Naturally, Walken tries to put a stop to this by hunting her down in appropriately scary fashion, and all sorts of schlocky supernatural hijinks ensue. It ain’t intellectual hour, but it’s held up very nicely by Walken, who clearly loves playing this character, and an eventual confrontation with Archangel Michael, played by Eric Roberts in what is delightfully inspired casting. The two of them have a quiet, focused exchange that elevates the material to near celestial heights which the film scarcely deserves. “How many world’s must burn before you’re satisfied?” Roberts inquires. “Just one. This one.” Walken purrs back. It’s a great scene and to this date the only time these two titans of the craft have shared the screen, and I’m thankful for it. Theres an amusing bit with Brittney Murphy, and a cameo by musician Glenn Danzig as well. The rest of the film is so so, but whenever Walken is there, baby it crackles.