Reto Salimbeni’s One Way literally starts off one way and throws curve ball after left field turn after another until you really begin to appreciate a truly original script for once. Granted he produced his film in indie land where there’s considerably more creative freedom than the studio system but still, this is one unique film and I promise you it’s not the action thriller that the US market has tried to sell it as.

As the film opens, teenage Angelina is pursued and sexually assaulted by several boys alongside a riverbank. Suddenly a mysterious military general (the late, great Michael Clarke Duncan) appears out of nowhere and, after gaining her permission, positively ventilates them with a sub-machine gun. Jump cut to a decade or so later and we see hotshot advertising exec Eddie (Til Schweiger), married to the boss’s daughter (Stephanie Von Pfetten) but cheating on her every chance he gets with multiple women. Grown up Angelina (Lauren Lee Smith) works for the firm too, and they both get entangled up in a murder investigation involving the boss’s son (Sebastian Roberts), who is a sadistic rapist and very dangerous given his position of power.

I’ve done my best to somewhat describe the story so you have a vague idea of what this is all about but it’s tough to impart just how twisty and unexpected the thing gets, and that’s half the fun. Schweiger isn’t exactly an actor of dramatic heft, often appearing as stylized characters or posturing tough guys, but he does alright here as the sheepish philanderer who learns his lesson big time. Smith is fantastic as the most sympathetic character and the closest we come to a clear cut protagonist, dealing with the most tragic, yet ultimately heroic arc and nailing it beautifully. Duncan is the most striking character and is seen the least but always makes a huge impression, here in a small but incredibly key role. Watch for Art Hindle, Kenneth Welsh, Ned Bellamy and Eric Roberts in a brilliant extended cameo as a defense attorney who gets a few big dramatic moments of his own.

I can see why this film was tough to market as there is so much going on tonally, narratives weaving together at their own leisure and nothing really conventional about it at all. There’s corporate espionage, courtroom intrigue, emotional interpersonal drama and many more elements at play. Really though it’s about confronting your past, dealing with trauma particularly when it comes to sexual abuse and standing up to people who attack with impunity. Smith’s character takes front and center here, getting a gruesome revenge scene that rivals The Girl With The Dragon Tattoo in it’s intensity. She has to face the horrors of her past full on here, whilst dealing with the legal problems Schweiger has thrown into the mix and it all makes for a unique, emotionally stirring and hypnotic hidden gem of a drama that I highly recommend.

Emily Blunt is at well earned mega star status these days and gets handpicked for all the prolific projects, but early on in her career she could be found in cheapies like Wind Chill, a spooky little snowbound ghost story that teeters right on the average line. She plays an awkward college girl who catches a ride with a fellow student (Ashton Holmes) home for the holidays, and their route happens to pass along a desolate, snowed in section of highway where something eerie is watching, following and messing with them relentlessly. The interaction between the two is odd, strained and tense, accented by two performances that are just somehow uncomfortably pitched, particularly Blunt’s. Things flow a bit more naturally when the car inevitably breaks down and she finds herself alone against the elements and whatever else is out there. It’s like a twilight zone episode a bit, the rules of time start to bend and she has strange encounters with an ominous highway patrolman (Martin Donovan) and a lone snowplow driver (Ned Bellamy), both of whom may or may not even be real. It works here and there and strives to focus on atmosphere, Blunt always has a presence and keeps us occupied as the supernatural occurrences reveal a freaky tale dating back decades. Nothing more than a distracting TV movie level horror flick, but watchable enough. Gotta give Blunt credit for climbing a tall ass telephone pole wearing heels though, even in cheaper films like this she gives it her all. The locations are also fantastic, kicking off at UBC here in Vancouver for the intro and moving to the gorgeous mountains of Manning Park for the snowy bits. 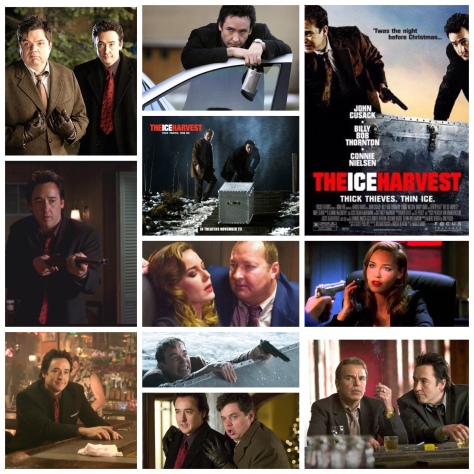 Harold Ramis’s The Ice Harvest is one of my favourite Christmas films and completely overlooked for the dry, sardonic black comedy gold that it is. It’s one of those dour, gloomy Christmas films where not only do things not go the protagonist’s way, but pretty much spiral out of control for everyone else too and the festive setting serves as an ironic lacing to the wry, nihilistic and comically violent story. John Cusack is laconic boozehound mob lawyer Charlie, who has just embezzled his gangster boss for a couple million, with the help of his scheming guttersnipe of a partner Vic (Billy Bob Thornton at his utmost sleaziest). That’s the jumping point for a deliciously warped, noirish descent into deranged family values, deadpan interactions, double crosses and drunken shenanigans, and really is there any other way to spend Christmas Eve? There’s a femme fatale in stripper Renata (Connie Nielsen, rawr), the specifics of whose loyalties remains gleefully ambiguous until later on, a titty bar bouncer (Ned Bellamy) with serious anger issues, a nasty thug (Mike Starr) dispatched to kill them and the vengeful big city kingpin who has been swindled, played by a blustery, cheerfully psychotic Randy Quaid. Speaking of scene stealing, Oliver Platt does an encore as Charlie’s best friend who is now married to his bitch of an ex wife, the impromptu Christmas dinner scene the entire family shares is some kind of fucking demented, mean spirited comedic genius (“Turkey Lurkey!”). It’s interesting because there is not one single redeemable character in the film, they’re all a bunch of conning, backstabbing, murdering, ill adjusted, jaded criminals and severe alcoholics, especially Cusack, who downs enough bourbon throughout the whole night that it’s a wonder he can stand up for the third act. But somehow… somehow there’s a strange likability to these poor souls, trapped in a perpetually snowy Wichita Kansas trying to outsmart, outgun and out-drink each other. Morality rears it’s head but once among the gunplay and verbal sparring, when Charlie imparts a parable to Platt regarding his two uncles, one of whom was a standup guy and died early and the other a scumbag that lived a long life. His point being that it doesn’t matter what we do in the service of morality because it could all end tomorrow, nothing even matters so why waste time trying to be good and get off the naughty list? I enjoy that cheeky justification, and what better time for it than Christmas? A classic for me.