Emily Blunt is at well earned mega star status these days and gets handpicked for all the prolific projects, but early on in her career she could be found in cheapies like Wind Chill, a spooky little snowbound ghost story that teeters right on the average line. She plays an awkward college girl who catches a ride with a fellow student (Ashton Holmes) home for the holidays, and their route happens to pass along a desolate, snowed in section of highway where something eerie is watching, following and messing with them relentlessly. The interaction between the two is odd, strained and tense, accented by two performances that are just somehow uncomfortably pitched, particularly Blunt’s. Things flow a bit more naturally when the car inevitably breaks down and she finds herself alone against the elements and whatever else is out there. It’s like a twilight zone episode a bit, the rules of time start to bend and she has strange encounters with an ominous highway patrolman (Martin Donovan) and a lone snowplow driver (Ned Bellamy), both of whom may or may not even be real. It works here and there and strives to focus on atmosphere, Blunt always has a presence and keeps us occupied as the supernatural occurrences reveal a freaky tale dating back decades. Nothing more than a distracting TV movie level horror flick, but watchable enough. Gotta give Blunt credit for climbing a tall ass telephone pole wearing heels though, even in cheaper films like this she gives it her all. The locations are also fantastic, kicking off at UBC here in Vancouver for the intro and moving to the gorgeous mountains of Manning Park for the snowy bits. 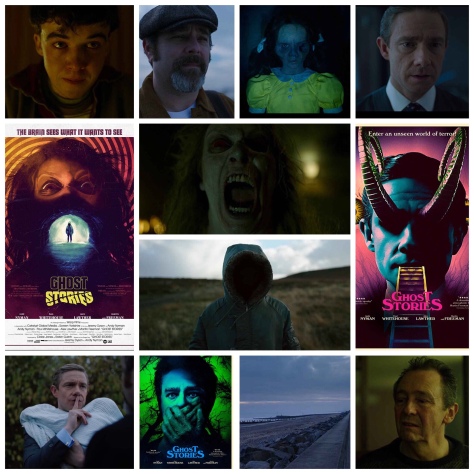 It’s always hard to find a horror flick these days that’s actually genuinely scary, not to mention fun as well. You have your endless found footage stuff, a consistent parade of ghost/exorcism fare, various creature features, and in the columns of hit or miss, unfortunately the latter weighs heavier. But once in a while there’s that terrifying ruckus of a haunted house flick that comes along and knows how to assault you on all sides with the creep factor, the laugh cannon and be a smart, well told and unexpected tale too. Ghost Stories is just that, a gleeful throwback to the BBC anthology horror of the 80’s that pulls the rug right out from you and frightens in a big way.

Set up in three distinct segments plus a kicker of a final fourth act, it follows a paranormal debunker (Andy Nyman) as he revisits three decades old spooky cases that have never been solved and haunt the afflicted to this day. The first and scariest sees a night watchman (Paul Whitehouse) on shift at an abandoned asylum who’s plagued by a restless spirit. In the second, a young boy (Alex Lawther) is harassed by a devilish creature as he drives through a forest in a stolen car. Lastly, father to be Martin Freeman is terrorized by a poltergeist in his home. These stories work great on their own but they really serve as a tapestry of clues to what’s really going on, and later down the line there’s some chilling revelations that are far more disturbing than any ghost going bump in the night. This is like the best, strongest points of Twilight Zone, Tales From The Crypt and Goosebumps done right with just a flourish of Black Mirror on the side. Freeman gives the best work, becoming cheerfully psychotic later and injecting delirious amounts of extremely dark humour into every mirthful grimace and off the wall mannerism. This is what horror should be.

David Twohy’s Below cleverly combines two genres which seem to be made for each other, yet had never met up until this film. The atmospheric ghost thriller goes on an underwater ride with the submarine film for quite the unique and eerie experience. Strange occurances happen aboard a US army submarine during a routine WWII patrol mission, starting with the rescue of several stranded British castaways from a decimated ship, including Olivia Williams and Dexter Fletcher. The Captain (Bruce Greenwood) attempts to keep his crew calm, but apparantly it’s bad luck to have a woman onboard and soon uneasiness creeps in amongst them. There’s a mystery about their quarters as well, involving the supernatural, and pretty soon crewmembers are seeing, hearing and reporting eerie stuff, which adds to the tension. The crew is rounded out by an eclectic bunch of actors including Nick Chinlund, Holt McCallany, Matthew Davis, Christopher Fairbank, and Zach Galifianakis as a guy named Weird Wally who really lives up to the name. There’s some spooky moments, high drama between the cast which they pull off well, and a twist ending that explains the ghostly elements. Underrated stuff.

Ahh, Ghost. What an authentic romance classic, a film that puts a big old grin on your face whether you want it to or not, a sloppy, smile that’s just wide enough to catch the tears that fall as a result of the sadness which accompanies the sweet, too essential ingredients in any love story that hopes to affect us in either direction. Balance is key, and Ghost employs both the giddy, heart-skipping joy of romance and the looming possibility of threat and tragedy in equal measures, never getting too dark or to soppy, at least for me. Demi has never been more adorable, in one of her career highlights. Her and Patrick ‘Roadhouse’ Swayze play star-crossed young lovers, in the beginning stages of building their lives together, a time that should be unconditionally happy for both, and is, until one fateful event rips them apart and plunges the narrative into effect. They encounter a thief in an alley one night, and Swayze is killed. Only, his spirit remains behind, for more reasons than he at first realizes. He keeps a protective, loving eye on Moore, and is driven to the notion that his death was no accident, his lingering presence meant for the purpose of both truth, love and retribution. He is aided and assisted by a sassy psychic (Whoopi Goldberg) who acts as his conduit between both realms. There’s supernatural intrigue and conspiracy afoot, but as exciting as that stuff is, it’s the love story between Patrick and Demi that has kept generations rooted to the story. A romance film is nothing without two leads who share both chemistry and a great script, which this one supplies generously. They are a show stopping pair in their scenes together, and if their predicament doesn’t draw forth both smiles and cries from you as a viewer, well, you’re wading through the wrong genre, my friend. The two of them make this one an honest to goodness winner with their performances, supported by narrative elements that only raise the stakes of their relationship. A film which will never not be a classic, and everyone should have in their collection. Ditto.

Haunted is an atmospheric, valiant yet frustratingly uneven ghost story effort, in the tradition of stuff like The Awakening and The Haunting. If the plot seems close to last year’s Crimson Peak, it’s because it is, and I’d bet that Del Toro had this forgotten entry in mind when he embarked on that journey. I say frustrating because there’s a certain few absolutely terrific moments of gothic horror that truly shiver your timbers, but they’re hopelessly mired in a mucky moor of a plot that unfortunately is not as effective as those key scenes. You David Ash is rough housing around wit his sister in the English countryside when she hits her head on a rock, and drowns in the pond below. He grows up soaked in guilt, dedicated to disproving the existence of paranormal phenomena. As an adult he’s played by Aiden Quinn, who is an average dude with slightly wild looking eyes who is always effective in the sense that he seeks out challenging, odd projects which test his everyday aura nicely. In the early 1900’s he is summoned back to rural Britain by an elderly woman (Anna Massey) who is convinced that she is surrounded by ghosts. He is greeted there by the luminous, attractive Christina (Kate Beckinsale), a friendly young thing with a distinct untrustworthy vibe and a penchant for getting creepy close with her two strange brothers (Anthony Andrews and Alex Lowe). She lives out there in isolation with them as well as their disturbed mother, and one gets the sense right off the bat that something is wonky. I suppose that’s the point though isn’t it? Beckinsale has carved a path of playing either somber, distraught women or tough, silent warrior chicks. This is the most animated work I’ve ever seen from her, and the most radiant she’s ever looked as well. It’s aslso to date the only nude scenes she’s ever put forth, and I don’t use the term lightly… she really bares it all here. The middle portion of the film meanders around with these characters, not revealing enough to push the plot forward enough, until the curtain  is whisked away jarringly in the third act, cementing it’s pacing issues for good. It’s a picturesque enough journey, I just wish we had something to latch onto besides that, some substance and a consistency in the creepiness factor to keep us invested. Alas. It’s got a spookily wonderful beginning, and an electric, full blooded ending, the only two instances where it shows true feeling and commitment. The rest is, well… stale. It’s worth a peek for a few reasons though, including Beckinsale’s solid performance and that one uber-scary scene in the opener.