David Argue is a brilliant, unpredictable talent. At his greatest when left to his own devices and instincts, he has graced Australian screens for the better part of five decades.

Gaining is equity card as an infant, he soon found his way to the National Institute of Dramatic Arts whose graduates include the likes of Mel Gibson (Lethal Weapon, Braveheart), Judy Davis (Celebrity, Absolute Power) and Colin Friels (Dark City, Darkman) just to name a few. He has worked with our finest behind the camera as well, under the direction of Peter Weir (The Truman Show, Dead Poets Society), Brian Trenchard-Smith (The Man from Hong Kong, Turkey Shoot) and Russell Mulcahy (Highlander, The Shadow).

He has enjoyed a career of richly diverse roles. Playing everything from outback lunatics to bumbling criminals to budding cinema proprietors. Sharing the screen with the cream of both Australian and international talent from a then unknown Nicole Kidman to being the cellmate of Ray Liotta.

David has watched the industry thrive, shrink and change as well as having the distinction of seeing himself decapitated. (If anyone out there reads this and knows the whereabouts of David’s fake head from the film Blood Oath – he would like it back)

Now at the end of his career, David sat down with me, in one of the most fun and certainly funniest conversation I’ve yet had, and talked about his life of many parts, about his hours of strutting and fretting upon the stage, as well as his hopes for a BMX Bandits 2.

Ladies and Gentlemen I give you the irrepressible, the incomparable, the irresistible David Argue. 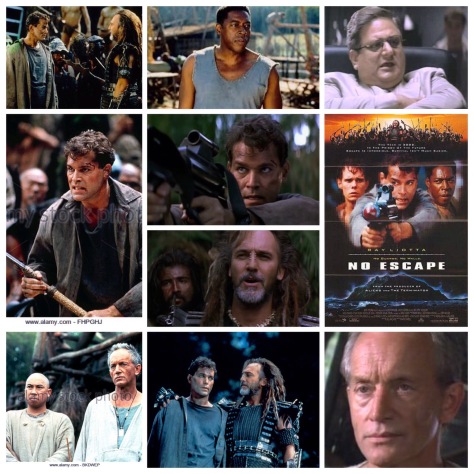 No Escape is the type of flick that Stallone or Schwarzenegger would have headlined, had it been given a higher budget and major studios presence. It’s almost better that it didn’t, because instead we got a scrappy little post apocalyptic actioner starring a cheeky, roughneck Ray Liotta, who you just can never say no to when he shows up. He plays J.T. Robbins here, an army official who’s been disgraced and stripped of his title following an incident involving a superior officer. He’s being shipped off to Absolon, a remote island that’s been fashioned into a massive prison for convicts who are never to be released. Two groups of prisoners inhabit Absolon: a piratical group of violent miscreants led by flamboyant Walter Marek (Stuart Wilson commands attention with his uproariously weird performance), and a peaceful tribe of hut dwellers, presided over by father (Lance Henriksen). Robbins wants only to escape, a prospect that has been fervently shot down in his face by Absolon’s overbearing Warden (Michael Lerner). Using his military cunning and inherent brute force, he tries to start a war between the two factions and raise enough of a commotion to make a break for it. What he doesn’t count on is his fondness for the people within Father’s group, and his eventual need to get some of the, out as well. It’s pure aged mid 90’s dystopian action cheese, and a delight for any lovers of the gourmet dish. Liotta is strong, silent and nasty when provoked, a great antihero. Henriksen is unusually compassionate and reserved, and Wilson struts around without any inhibitions, wearing his best grade school play face chomping scenery like a wildebeest. Watch for work from Kevin Dillon, Ian McNeice and Ernie Hudson as well. A lighthearted romp with its heart in the right place and the competence to back it up.