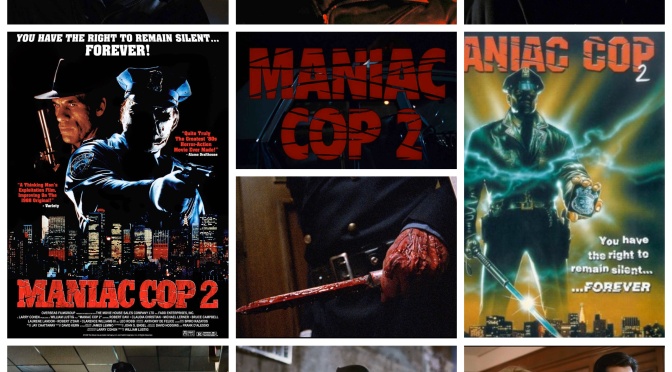 Maniac Cop is one of the great hidden gem trash trilogies of the 80’s and has now been picked up for a reboot by Nicolas Winding Refn, which I couldn’t be more excited for. It’s time to revisit my favourite of the sequels, William Lustig’s Maniac Cop 2, which sees undead psycho cop Matt Cordell (Robert Z’Dar and his epic jawline) come back for some more supernatural police brutality and wanton carnage. Originally arrested for excessive force, he was assaulted in prison and came back from the dead as something else, something way worse than your garden variety rogue cop. This is one of those slash n’ burn sequels that kills off the heroes of the first film within minutes of getting underway, which I always find hilarious. As such we only see Bruce Campbell’s Jack Forrest briefly but any appearance from him always helps a film. This time veteran Sergeant Sean McKinney (Robert Davi, never more badass) is on the hunt for Cordell, along with a police psychologist (Claudia Christian). Cordell has plans beyond simply killing everyone in his path this time though, and begins to recruit similarly minded lowlifes for his own personal army starting with a Manson style serial killer (Leo Rossi) who targets strippers. This is trash, there’s no beating around the bush. But it’s gourmet trash, it knows it’s groove and hums along beautifully within it. Cordell is a spectacular villain, a physically imposing juggernaut, whether he’s beating people senseless or Terminator-ing an entire police precinct singlehandedly. Check out the first and third ones too, they’re epic although this has always been the pinnacle for me. These films are perfect relics of a lost era when seedy genre stuff ran the show, and I can’t wait to see the spin Refn will give to them. 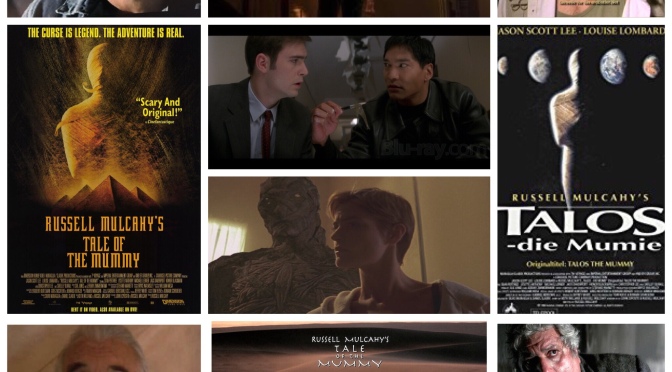 Russell Mulcahy’s Talos: Tale Of The Mummy is a fascinating failure of huge proportions, a well casted, unbelievable muck-up that has to be seen to be believed. When your low rent Mummy flick comes out at pretty much the same time as Stephen Sommer’s classic The Mummy, you know you have no shot at getting it out there past a few cable runs, especially when the film has been plagued by one nightmare of an editing fiasco from day one, not to mention low budget and more pacing issues than spastics in a sack race. There’s two apparent versions of it, a 115 minute international cut that was edited down to 88 minutes because of some humour that was in bad taste and aforementioned pacing problems. I saw the shorter version, and I can’t imagine the flow of the film being any worse than what I bore witness too, so maybe they should have just gone with the original cut, but who can really say. The film is essentially just two very cluttered, chaotic prologues jam packed with cameos and creaky special effects, and then one long boring extended horror sequence set in London, so you never get the feeling that they knew what they were doing before the editing process even commenced.

The opening sees archeologist Christopher Lee unearthing some ancient tomb in Egypt with his assistant (Jon Polito), both getting very quickly dispatched by some evil via a flurry of visual effects that are either really cool or really bad, jury is still out on that one for me, they’re just weird more than anything. Skip ahead some years and yet another team falls victim to this Talos Mummy thing, led by Louise Lombard, Brit tough guy Sean Pertwee and Gerard Butler of all people, in what is probably his first movie gig ever. Flash forward to London some months later, we see the Mummy thing roaming around killing people at will, and also seemingly at random. Two detectives played by Jason Scott Lee (looking very out of place in England) and Jack ‘Commodore Norrington’ Davenport investigate and the story just loses itself to nonsensical doldrums and lame ‘scares’ for the rest of the duration. Shelley Duvall bizarrely shows up as a journalist, as well as Honor Blackman and the Sean Pertwee character, now a raving madman who no one will believe when he says the Mummy is out to get them. I’m still aghast at the sheer number and variety of notable actors Mulcahy got to appear in this thing, most of them fleeting or short lived but still making hilarious impressions in a story they had to know was just plain silly. There’s a few things that work; the FX in the Christopher Lee sequence are a neat, schlocky blend of CGI and practical and work on their own scrappy terms. There’s a very brief flashback sequence to Ancient Egypt that shows how Talos became an evil creature that’s visceral and well designed, but doesn’t last long enough to boost the overall quality. Everything in London with the two cops is just laaammee though, and drags it all down the sewer. Talos there resembles a filthy shower curtain that went through a paper shredder and subsequently got carried away by a strong gust of wind, neither remotely scary nor stylish, just your average half assed B flick monster. Worth a watch simply for the odd spectacle of it all, and for research purposes.

No Escape is the type of flick that Stallone or Schwarzenegger would have headlined, had it been given a higher budget and major studios presence. It’s almost better that it didn’t, because instead we got a scrappy little post apocalyptic actioner starring a cheeky, roughneck Ray Liotta, who you just can never say no to when he shows up. He plays J.T. Robbins here, an army official who’s been disgraced and stripped of his title following an incident involving a superior officer. He’s being shipped off to Absolon, a remote island that’s been fashioned into a massive prison for convicts who are never to be released. Two groups of prisoners inhabit Absolon: a piratical group of violent miscreants led by flamboyant Walter Marek (Stuart Wilson commands attention with his uproariously weird performance), and a peaceful tribe of hut dwellers, presided over by father (Lance Henriksen). Robbins wants only to escape, a prospect that has been fervently shot down in his face by Absolon’s overbearing Warden (Michael Lerner). Using his military cunning and inherent brute force, he tries to start a war between the two factions and raise enough of a commotion to make a break for it. What he doesn’t count on is his fondness for the people within Father’s group, and his eventual need to get some of the, out as well. It’s pure aged mid 90’s dystopian action cheese, and a delight for any lovers of the gourmet dish. Liotta is strong, silent and nasty when provoked, a great antihero. Henriksen is unusually compassionate and reserved, and Wilson struts around without any inhibitions, wearing his best grade school play face chomping scenery like a wildebeest. Watch for work from Kevin Dillon, Ian McNeice and Ernie Hudson as well. A lighthearted romp with its heart in the right place and the competence to back it up.