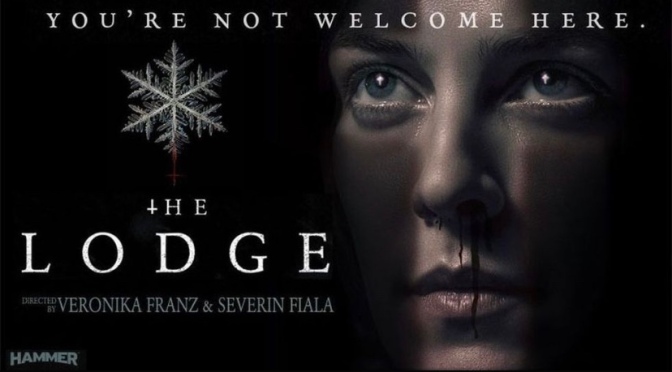 Here’s a hypothetical for you: let’s say you’re a middle aged male widower mourning the loss of your severely mentally ill wife who shot herself mere months ago, in front of your two young children no less. You’re grieving, your kids are all kinds of fucked up, and you’ve decided to date again. Your new young girlfriend has recently been rescued from a whacked out, abusive doomsday cult and is adjusting to normal life again with utmost fragility. You take a vacation to a secluded ski lodge in the winter, thinking it will be nice for your equally traumatized children and girlfriend to get some bonding time in. Now… in this scenario, all things considered, how would it be responsible, intuitively practical or remotely advisable in any way whatsoever to take off and leave your kids alone with this girl for an extended period of time? The Lodge is based around this premise and while it’s very well acted, shot and quite atmospheric, the entire film didn’t work for me because I just couldn’t bring myself to take stock in such a ludicrous narrative gambit such as this. Richard Armitage is solidly haunted as the father, Riley Keogh an unsettling porcelain waif as the disturbed new girlfriend, Jaeden Martell and Lia McHugh capable as the two kids. Alicia Silverstone (of all people) gives the best performance of the film in her quick turn as the ailing mother, I didn’t think I’d ever give high dramatic praise to the Clueless girl but here we are, she owns her cameo with disconcerting resolve. This film’s issues aren’t with acting, cinematography or even music, which are all exemplary. It’s the script that doesn’t ring true, and offsets the entire thing. Besides the dad leaving them alone together (facepalm), the kids pull some weird shit on the girlfriend that spurs the horrific final act into motion. I mean I know these kids aren’t in their right minds, they’re grappling with life and death at a young age etc etc, but they *still* should have intuitively known better, on a deep level, than to pull the kind of cruel, damaging stunt they do here. I think every beat in the story after the mom’s suicide just felt false, discernibly orchestrated and hollow to me, and the film majorly loses its way before it even has a chance to get going past the prologue. Misfire overall.

I had a lot of fun with Ocean’s 8. I mean it’s no Ocean’s 11 but that’s a hard plateau to breach. If anything though, the heist this time around is a little more fun, a bit more showy and humorous too, and every one of the girls headlining the all star blow out of a cast has a ball and does great. Some viewers bitch that it uses the same peppy split screen techniques and apes the laid back score and charm of Soderbergh, but hello people, this is in the same franchise and it stands to reason that it would feel like the others. Sandra Bullock plays Debbie Ocean, brother to George Clooney’s now deceased Danny, which is a shame because I would have loved to see a partner up flick. She’s no less the troublemaker, and the film follows the same beats of her being paroled and immediately planning an elaborate heist with many moving parts, all carried out by a crew of carefully picked, charismatic scoundrels, starting with Cate Blanchett’s Lou, a streetwise small time crook with sass and style. Instead of three giant Vegas casinos, the plan this time is to lift a priceless diamond necklace (actually it clocks in somewhere around the 150 million range) from the hilariously faux prestigious Met Gala. The piece will be worn on the neck of persnickety, ditzy mega star Daphne Kluger (Anne Hathaway), which requires a pickpocket (Awkwafina), a hacker (Rihanna), a fence (Sarah Paulsen), a fashionista (Helena Bonham Carter), a forger (Mindy Kaling), a few well placed cameos and plenty of hair-brained schemes within schemes along the way. Director Gary Ross keeps the mood light, fast paced but never too silly, letting each actress have their priceless moments. Hathaway was my favourite as the clueless diva who is exasperated by anyone in her orbit, and Bonham Carter nails an adorable Irish accent and scene steals the whole way through. I’ve heard complaints about originality and that it’s just a retread with chicks, and the may be so but it’s such a winning, fun formula! Who wouldn’t want more? They could do one with a bunch of dogs taking on a heist next and if the charm was there I’d be on-board because as it is, this is the perfect recipe for intelligent escapism and I enjoyed this one a lot.

Some people give me funny looks when I say I enjoyed the Hobbit films. There’s this giant festering stigma around the entire trilogy that’s hard to wade through if you are one who geniunly did enjoy a lot of what Peter Jackson brought us with his second barrage of Middle Earth sagas. Now don’t get me wrong, there’s plenty of things he muffed up, the chief aspect being editing and length. We did not ask for, need or want an entire LOTR lenghth trilogy based on a book that could have fit into one volume of that series. Jackson has a tendancy to overreach, film too much and throw it all into his final cut. It started with the extended cuts of LOTR, which were somewhat unneeded, continued with King Kong, which could have been at least 45 minutes shorter, and has now climaxed with The Hobbit films. They’re so long and stretched out that at times we realize we’re not even watching stuff from Tolkien’s annexes or archives, but simply shit old Petey made up to pad the waistline of content that’s begging to be slimmed down. I’m still waiting for a fan edit that condenses everything down into what is necessary to tell the story, and pitch everything else into the purgatorial halls of DVD deleted scene land. And therein lies my argument: There’s gold to be found here, but a lot of folks are so turned off by all the unnecessary razzle dazzle that they have become blind to what actually worked. An Unexpected Journey kicks off the trilogy and definitely fares the best, feeling the most akin to the book. Martin Freeman is lovely as a young Bilbo, baffled to find thirteen rowdy dwarves dumped on his doorstep, the work of Gandalf The Grey (Ian McKellen, like he never left the role), who wishes to prod him in the direction of a most dangerous and thrilling adventure. Bilbo is a mild creature and deeply in love with the comforts of home, but is whisked along all the same, after a chaotic dinner party and plate throwing contest from this knobbly group of mountain dwelling pygmies. Orcs, Wargs, Goblins, colossal mountain giants and an appearance by the ever fascinating Gollum await them. There’s an interlude into Elrond’s heavenly glade where Gandalf, Saruman (Christopher Lee) and Galadriel (Cate Blanchett) have a little CSI: Rivendell episode with an ancient dagger that hints towards the return of Sauron. One thing Jackson added that is a highlight is additional wizard Radagast The Brown (Sylvester McCoy) an eccwntric hippie who rides a chariot led by massive rabbits in breakneck bouts of Need For Speed: Middle Earth with Orcs atop Wargs. A distinct feature about these films compared to LOTR is the ramping up of CGI; many Orcs are no longer stuntmen in gloriously goopy makeup, but giant computer rendered behemoths, taking some of the texture and authenticity away. Jackson also chose to shoot in many more frames per second than the human eye is used to, giving everything a strange, wax museum sheen that is pretty distracting. Close your bag of tricks and make us a goddamn straightforward flick Pete. Fuck sake. For all the issues, it’s terrific to be back in Middle Earth, however different it looks and feels. The production design is still an elaborate wonder of creative design and decoration, Howard Shore’s now timeless score makes a triumphant return and there’s a beautiful new song courtesy of the dwarves. Say what you want, bitch and moan til the Wargs come home, I love this first outing dearly and rank it nearly as high as LOTR. I can’t say the same for the next two, especially the exhausting Battle Of Five Armies which diminished my patience for Jackson and his tricks a whole lot. But, like I said, there’s always gold to be mined from the needless padding that’s been tossed in. One day someone will edit that perfect cut for us, and we’ll have that definitive Hobbit film. Until then, cherry pick the best parts and try to put the rest from your mind.