I feel like a lot of people were expecting a vast, loosely paced biopic from Sacha Gervasi’s Hitchcock, but what they really got was a tight, sardonic, laser focused and surprisingly emotional look at the relationship with his wife Alma (Helen Mirren), during the making of Psycho, and the monumental struggle it took in bringing the now iconic horror film to being. It’s about adjusting your expectations really, and keeping them in check, and you can enjoy what is one of the best films of that year. Meticulously casted with a galaxy of brilliant actors, royally mounted in terms of production design and costume (Oscar shamefully glossed over it in those categories) and written with brittle, whip-crack wit by John J. McLaughlin, it’s a treat for cinema lovers and Hitchcock junkies alike. Anthony Hopkins plays the old goat as a stubborn, eccentric, obtuse man, a filmmakers who is so fascinated by the universal revilement he’s met with upon pitching Psycho that he morbidly just has to see the production through, even if it means friction from all angles including Alma, the studio, the censorship board and everyone in between, not to mention mortgaging his snazzy mansion in the process. It’s an interesting look at one of the most important mile markers in the horror legacy, the dawn of the slasher film and Hollywood’s begrudging shift from camp to lurid exploits in the fright flick, which saw Alfred gleefully starting the snowball effect with Psycho. James D’arcy is uncannily perfect as Anthony ‘Norman Bates’ Perkins, Scarlett Johansson captures the virility and charisma of Janet Leigh magnetically, and Jessica Biel does great work as Vera Miles, looking almost unrecognizable. Hitchcock based the character of Norman Bates on famed serial killer Ed Gein, and as such the filmmakers have him appear to Hopkins in ghostly fashion, played grimly and excellently by character actor Michael Wincott, a supernatural stylistic flourish that some hated for its gimmickry but I found a neat, provocative touch. The cast gets deeper with work from Toni Collette, Danny Huston, Ralph Macchio, Richard Portnow, Michael Stuhlburg, Frank Collison and Kurtwood ‘Red Forman’ Smith as a crusty chairman of the censorship board. Hopkins slithers expertly into the prosthetic makeup and opaque personality of the character, clearly having a mischievous blast and cutting loose from some of the more laconic roles he’s done, it’s one of his most engaging performances. Sure it’s not a grand old biopic of the guy, spanning years and leaping multiple story arcs, but I found the intimate focus on his marriage and Psycho to be deliberate, riveting and well deserving of any audience’s attention, especially for fans of that era of Hollywood. A winner. 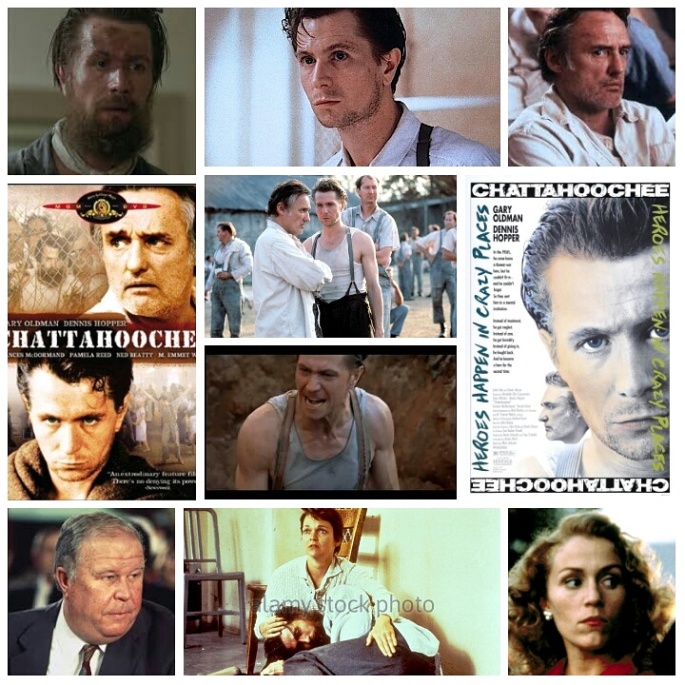 Chattahoochee tells the sad and disturbing tale of Emmett Foley (Gary Oldman) a Korean War veteran who has returned home with severe PTSD. In a tragic and scary sequence, he shoots up his neighborhood in confusion and fear, injuring himself in the process. He is then sent to a ‘maximum security’ mental facility, and anyone who has heard what places like that were like in the 1950’s cam imagine what he’s in for next. The place is an unkempt, filthy sinkhole where the inmates are abused, neglected and subjected to inhuman maltreatment. So now, in addition to dealing with his mental illness, Emmet must witness this miscarriage of medical treatment on a daily basis, and suffer through it himself. He is befriended by deceptively cavalier Walker Benson (a funny and touching Dennis Hopper), and the two of them try to seek out better treatment and conditions for their fellow inmates. Only problem is, the beauricratic faction doesn’t want to hear any of this, stone walling and throwing it in their faces with callous indifference. It becomes the struggle of Emmet’s lifetime to win the day against this rotten system, and he’s aided by his sister (Frances Mcdormand) in his efforts. Oldman is as intense as you’d imagine with subject matter like this, an implosive tsunami of dread and outrage as he both bears witness and cries out in protest. Ned Beatty plays a nasty doctor, and there’s also work from Matt Craven, Gary Bullock, M. Emmett Walsh, Richard Portnow and Pamela Reed. This one is tough to find, and a tad forgotten, but it’s worth the hunt. It’s also based on a true story about a real veteran  named Christopher Calhoun, who later wrote a book detailing his experiences. Harrowing, but important stuff.