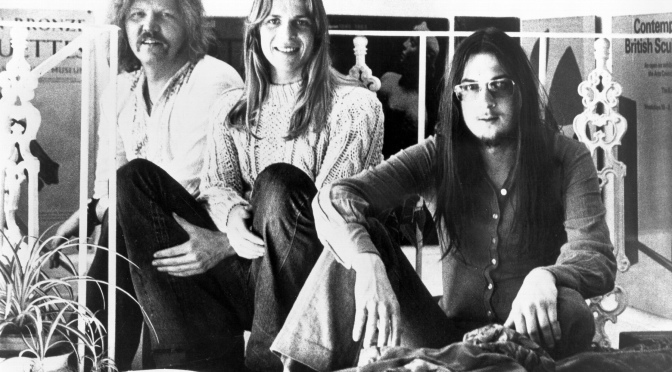 The 80’s are coming back in a big way within film and television and with them comes the always awesome sonic synth sounds of that era. One of the pioneering musical influences and inspirations in this movement is German electronic group Tangerine Dream, consisting of group members Edgar Froese, Paul Haslinger and a whole host of others who contributed over the years. They literally have hundreds of albums due to the simple fact that they loved to experiment with sound and release all sorts of eclectic material, first on tactile vinyl and these days strewn across the internet like hidden treasure. They also worked heavily in film, lending their pulsating, ethereal, gorgeous and incomparable aesthetic to many genre cult films throughout the 80’s. They are my favourite film composers of all time and it’s hard to pick but I narrowed their work down to ten of my favourite original compositions for film! Enjoy:

This is admittedly an unspectacular film, an L.A. noir starring Robocop’s Peter Weller as one tough cop caught up in your garden variety political conspiracy complete with extortion and murder. The score here is driving, grungy while still airy with just the right hints of menace and murky danger. Favourite track: the moody, slow crawling opening theme.

Another noirish conspiracy flick, this is set in the New Mexico desert and sees two opportunistic border guards (Kris Kristofferson and Treat Williams) run afoul of dark forces headed by a cynically corrupt federal agent (Kurtwood Smith) and apparent ties to the Kennedy assassination. The work here is arid, dusty and atmospheric, accenting the remote, lonely locations well and swelling up portentously when danger looms over the sun n’ sand drenched horizon. Favourite track: Highway Patrol, a clap of rolling backroad thunder that suggests the danger to come.

This old school fantasy is mostly remembered for a young Tom Cruise as the hero and Tim Curry as evil itself with a demon getup that puts the Devil from Tenacious D to shame. Dream composes a lyrical, melodic playlist here that holds the beautiful imagery and special effects onscreen nicely. Favourite track: ‘Loved By The Sun’, a particularly lovely passage of ambience.

This fierce, arresting adventure film sees several lowlifes and hard-cases from around the world transporting giant trucks loaded with volatile nitroglycerin through the South American jungle. You can imagine the fun that Dream would have composing this score and they don’t disappoint, their score doesn’t properly kick in until we first see the trucks nearly halfway through the film, but when it does you feel it like a sonic boom. Favourite track: ‘Betrayal’, an intensely affecting, dark hued composition.

The elemental group goes decidedly more urban in Mann’s early career crime masterpiece about an expert safecracker (James Caan) taking one one last heist. The music is moody, dark and nocturnal to suit Mann’s blooming aesthetic we know so well today. Favourite track: ‘Final Confrontation’, a sweeping piece that plays overtop a blisteringly cathartic slow motion shootout and carries over into the end credits with epic grit and grace.

Drew Barrymore and David Keith battle nefarious government forces in this thrilling Stephen King adaptation, made more so by Dream’s rhapsodic score, which suits the supernatural, trippy tone of this story so perfectly. Favourite track: ‘Charley The Kid’, a layered, star speckled composition that has a forceful edge appropriate for the character but also a playful curiosity that reflects her childlike mind.

A film about a potential nuclear attack on Los Angeles seems like it would have a traditional Hollywood-esque score but this is the brilliant, unconventional cult classic that is Miracle Mile and it greatly benefits from the talents of Dream to make it so. Their proverbial surname fits like a glove here because there is an overall dreamy aura to this nocturnal neon nightmare, I’ve had a few dreams myself about impending, inevitable nuclear or otherwise inflicted disaster, probably why I connect so well with this material. The score may seem counterintuitive but there’s a momentous drive to it and lighter, brisk areas to underscore the very sweet romance at its core. Favourite track: ‘Running Out Of Time, which sets the ‘anything can happen’, pins and needles apprehensive mood just amazingly.

Any hardcore GTA fan knows that the main musical component that everyone looks forward to and remembers are the car radio soundtrack choices, but there’s also original scores deftly layered into the action, missions and cutscenes. Everything from heists to shootouts to plane rides to car chases to boat derby’s and every spectacle in between is outlined here in a California-lite series of compositions that see Dream slightly evolve out of their 80’s synth sensibilities yet still retain the essential soul that says ‘this is our work.’ Favourite track: ‘North Yankton Memories’… because I couldn’t count the amount of times this brilliant piece kicks in the minute I do something naughty, that two star wanted level pops up and the LSPD come careening down the highway after me.

Atmosphere haunts this cult vampire western about a young cowboy (Adrian Pasdar) seduced by a gorgeous waif (Jenny Wright) and swept you in the brutal nomadic lifestyle of her roving clan. Desert sunsets, blood on chrome, choking smoke, hurtling police vehicles and the occasional moment of nocturnal solitude, it’s a rigorous, ravishing aesthetic and Dream gives it their all with an intermittently droning and ariose work. Favourite track: ‘Mae’s Theme’, a low key, hovering piece that accents the tragic nature of her character.

This film is something of an artifact, hacked to pieces in the editing process by the dipshits at Paramount, causing Mann to disown the film and yank any distribution rights. One day he’ll cool off and we’ll get a decent Blu Ray. It’s a stunning piece of pseudo Lovecraft WWII supernatural horror and one of my favourite films. Dream’s score echoes throughout the halls of this Romanian structure as German soldiers, metaphysical warriors and Jewish historians try and piece together the meaning behind this ancient place. Favourite track: ‘Gloria’, a synth laden piece with orchestral strains and beautiful vocal work, full of mystery and reverence.