The slasher sub-genre of horror has consistently and gradually become self aware as it has evolved, reshaping it’s archetypes, going spectacularly meta and immersing the audience in self commentary whether it’s well known blockbusters like Scream or obscure indie treats like The Rise Of Leslie Vernon. The Final Girls is as detailed, referential, loving, meta and rewarding as they come with a disarmingly affecting emotional weight to it I did not expect. Playfully skewering summer camp slasher outings like Friday The 13th and Sleepaway Camp, it stars the lovely Taissa Farmiga as Max, a teen girl whose mother Nancy (Malin Ackerman) is killed in a brutal car wreck. Nancy was once a Hollywood scream queen and starred in the very popular Camp Bloodbath franchise, a claim to fame that she always resented and a legacy that Max now wants nothing to do with. At an anniversary screening of the first Bloodbath film Max and her friends find themselves somehow transported into the film itself through the screen by some sort of magical inter dimensional slasher voodoo, the same kind of cinema themed mysticism that brought that one kid into the Schwarzenegger movie world in another vastly under appreciated meta flick, Last Action Hero. In this pristine 1980’s world they find sunny campgrounds, a glassy lake and knowingly corny writing (the movie counsellors are priceless) and the killer himself, who is set on a preordained murder spree of these characters which include, as a panicked Max learns, her own mother. So begins a breathless, clever and often very funny deconstruction of the classic slasher narrative as these modern kids quite literally interrupt it midway and aggressively rearrange the formulaic turns we’re so used to experiencing beat by beat. There’s an epic, adderall fuelled striptease set to She’s My Cherry Pie, endless tongue in cheek jokes and references that get turned on their head, some wild, colourful and borderline psychedelic set design and cinematography in the ‘movie’ world too. What really makes this such a great film and a strong piece is the deeply heartfelt mother daughter relationship between Max and Nancy, acted stunningly by both. Farmiga is an unbelievable otherworldly talent and, dare I say, more mesmerizing onscreen than her sister Vera, one long stare from her could shatter down walls built by anyone, she makes Max a wounded yet resilient spirit. Ackerman gets shafted a bit as the ‘hot blonde’ archetype but she is far more talented than she gets credit for and does a delicate balancing act here between obligatory campiness with pockets of very candid realism peppered in for a gem of a performance. Now, myself being someone who has used both film and music to cope with the death of a parent, I can tell you that this film is almost too real and near transcendent at accomplishing that theme onscreen. It’s essentially a story about Max working through the unimaginable hurt, and very long lasting pain of losing her mother presented in a mature and heartbreaking way, reflected through the prism of a fun, self aware horror comedy and I think the overall idea and execution are genius, really. Add to the fact that the song that Max and Nancy share as ‘their song’ is Bette Davis Eyes by Kim Carnes which was one of my dad’s favourites so you can say that, for me, this cut really deep (slasher pub heavily intended). A masterpiece, streaming on Netflix now.

Talk about laidback and low key. I knew by the trailers that Clint Eastwood’s The Mule wasn’t going to be an outright thriller or anything intense despite the subject matter but I really appreciated how wistful, elegiac and at ease with itself this film was. Eastwood is knocking at 90’s door and is still spry as a sprite, once again taking both acting and directing duties in the story of Earl Stone, an elderly horticulturalist turned drug mule for the Mexican cartel. Earl is an egocentric social butterfly who could never seem to find time for his family or put them before his needs. His wife (Dianne Wiest) resents him, his daughter (Alison Eastwood) full on abhors him for missing her wedding. Only his granddaughter (Taissa Farmiga keeps getting more fantastic with each new role) holds out hope and still welcomes him with open arms. He’s all but broke when his garden centre is foreclosed upon, until a chance meeting puts him in touch with underworld operatives and before he knows it he’s ferrying lump sums of narcotics across the states for very dangerous people. This character fascinated me because even when he gets this extremely lucrative opportunity that allows him to partly buy his way back into his family’s life, he doesn’t understand or ignores the fact that if they knew where he got all this money from he’d be more in the doghouse with them than when he started off. This is essentially a story about a guy who never took responsibility, who never took life seriously enough to have a proper legacy until he gets an eleventh hour chance to do so. There’s a workaholic DEA agent played excellently by Bradley Cooper and they share a few chance encounters that capture the essence of this story nicely. They’re two men on opposite ends of the law and very different places in their life who are nonetheless able to share a few moments, enlighten each other’s perspectives and be all the wiser because of it. I loved this story because it ably showed how even in one’s twilight years when one is *still* making mistakes, it’s not too late to reconcile or turn it all around. Great film. 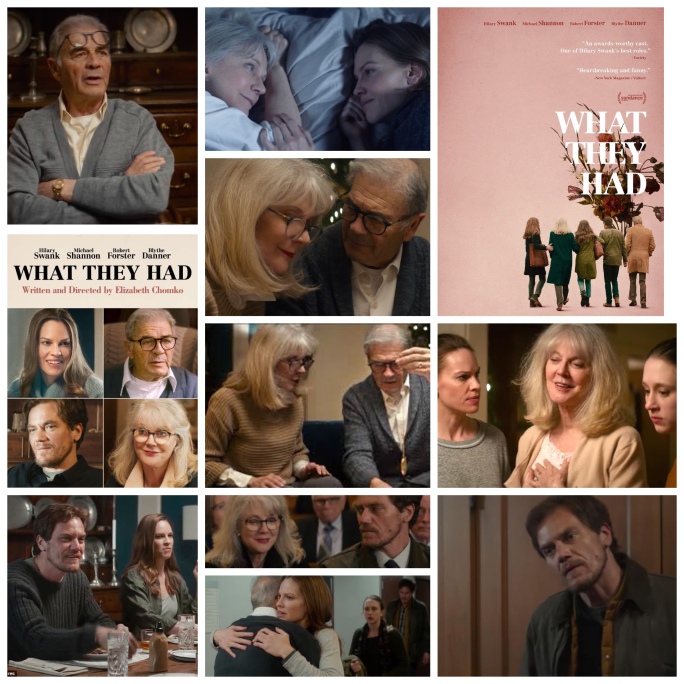 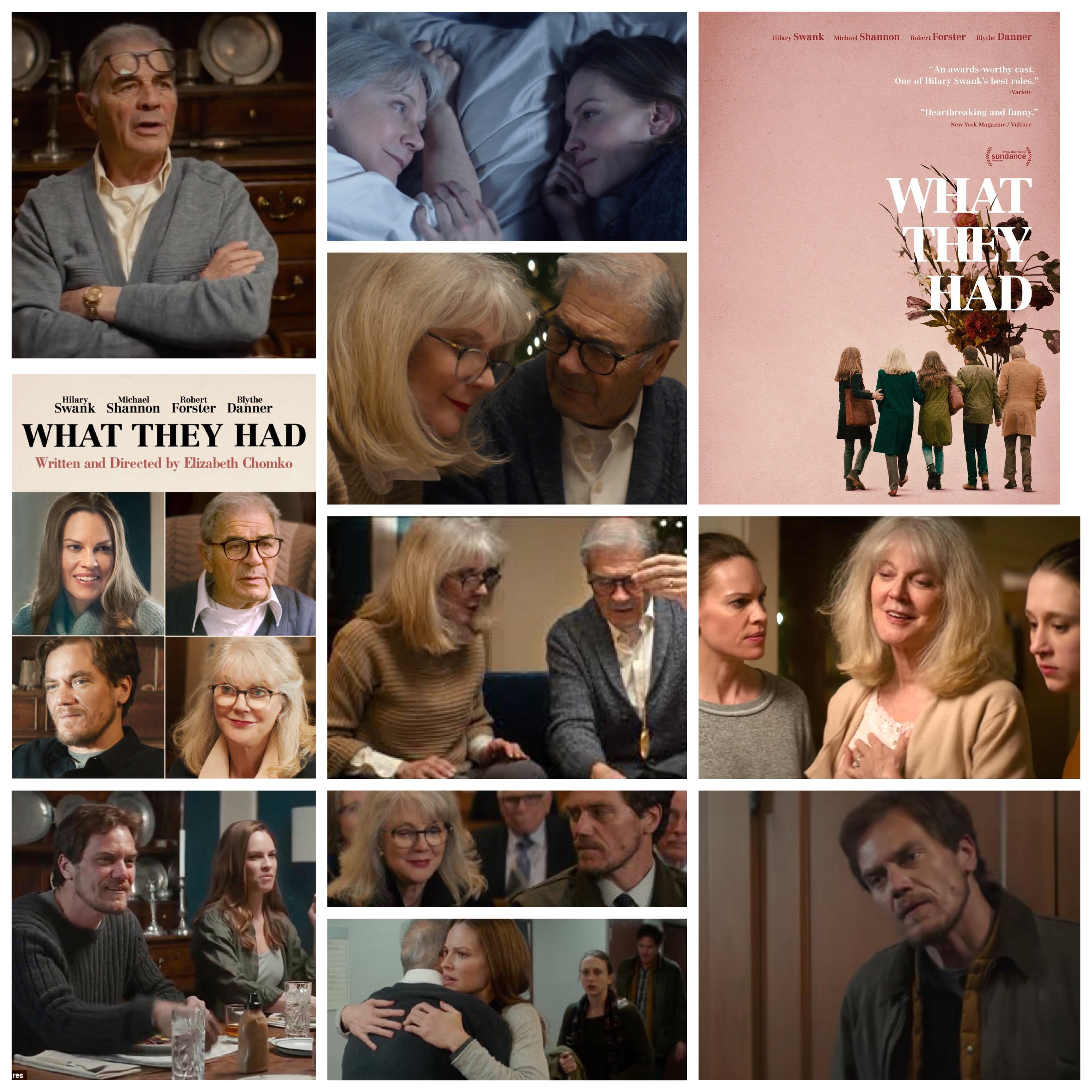 Alzheimer’s disease is a tricky subject in film; it can often sink into distracting melodrama or be used as a plot device instead of an actual ailment to the character, as they conveniently collect themselves when the narrative requires it and then get all confused again when needed. First time director Elizabeth Chomko handles it wonderfully in her debut What They Had, letting the sad realities of this affliction play out realistically for one Chicago family whose matriarch approaches stage 6. Blythe Danner playfully, sadly and intuitively embodies this woman, fleetingly letting us see glimpses of the woman that once was, now lost to inexorable mental fog as she approaches the end. Her husband of four odd decades (Robert Forster) refuses to put her into a home, out of both stubbornness and just plain love. Their two children (Hilary Swank and Michael Shannon) return home to deliberate the situation, and a superbly acted, quietly honest family drama ensues. Chomko also wrote the script and her dialogue has the stinging bite and dynamic depth of someone who is drawing from somewhere personal, and indeed I read that this film is based on her own experience. She shows surefire talent in writing as well as behind the camera and I wish her all the best in a career that will hopefully be something really special. Shannon is perfect as the scrappy, diamond-in-the-rough bar owner who uses gruff bluster to mask his heartbreak. Swank is emotionally resonant as the more distant and reserved of the two siblings, trying to deal with both her mom and daughter (Taissa Farmiga, excellent). Forster has seldom been better as the obstinate family man who just won’t let his girl go, he handles the guy with a stern resolve that begins to crack as he realizes that one day she will forget him entirely. Danner has the most difficult role, but nails it. There’s a befuddled remoteness to people with this disease, a near constant confusion that I’ve seen in real life but that doesn’t dim the warmth of their personality, at least for a while anyways, and the actress never over or underplays it. This is a terrific debut for Chomko and demo reel worthy material for all the major players, a small scale drama that wins big and elicits well earned empathy from us. Highly recommended.

Mindscape, given the less tantalizing title ‘Anna’ upon release, is a thinking person’s thriller, and perhaps a little bit too much so. In the near future, or perhaps some alternate reality, some humans have evolved into pseudo clairvoyants who can enter the memories of other people and interact with their subjects within them. This talent has been trademarked by law enforcement, who employ ‘memory detectives’ to psychologically resolve conflict or retrieve otherwise out of reach information. Mark Strong is one such man, but his talents have dimmed a bit following the deaths of his family and a crippling stroke. Hauled out of retirement by his former boss (Brian Cox, sly as ever), he finds himself tasked with navigating the labyrinthine mind of Anna (Taissa Farmiga) a girl accused of murder and deemed a potential sociopath pending diagnosis. The film is deliberately dense and elliptical, not standard Hollywood fare at all, which is nice to see, but it also trips just a little bit on its own cognitive aspirations, especially in the third act. It’s one of those pieces that’s less like The Cell, and more like Vanilla Sky or Danny Boyle’s Trance (two absolute favourites of mine) where so much of the story wades through muddy mindgames that at a certain point we think to ourselves ‘well who’s to say if any of this is actually real if it’s gotten so complex’, and indeed it’s very difficult to piece together what has transpired here, especially with a conclusion that would require multiple viewings to even get an inkling. It’s stylish as all hell though, given a clinical, steely grey palette punctuated by flourishes of startling red to show the capacity for violence lurking just out of sight within the opaque and enigmatic human psyche. The acting is top tier as well; Strong is reliably committed and intense, Farmiga is deeply disconcerting as the most fascinating and ambiguous character, showing blossoming talent that I look forward to seeing more of, while Cox steals his scenes as per usual. The film trips over itself a few times and like I said, overly convoluted, but it’s one mesmerizing effort for the most part, albeit after a second or third viewing.