I kinda get the beef with William Malone’s House On Haunted Hill, I mean it’s essentially a lazy, paper thin story gussied up by a whole bunch of spooky visual effects and fancy, baroque production design, but I loved it anyhow. Malone is the same guy who made the infamous FearDotCom and such was also the case there: nonsensical narrative made entirely watchable by pure visual artistry alone. Maybe the guy has a yet to be discovered career in music videos ahead of him. Anyways, the plot revolves around a weird looking building sat on a cliff overlooking the sea, a place which was once a freaky asylum run by a mad surgeon (Jeffry Combs with nary a word of dialogue) who murdered his patients. Half a century later it’s owned by snarky amusement park guru Geoffrey Rush and his potty mouthed femme fatale wife (Famke Jannssen). They invite several bored LA types over for the night including a faded baseball star (Taye Diggs), a movie studio VP (Ali Larter), a smarmy hotshot Doctor (Peter Gallagher) and a tabloid journalist (Bridgette Wilson Sampras). The deal is, if you make it one night alive in this place Rush will pay you a cool million bucks. You can guess what happens next. This film is very short on story and a lot of it is just characters wandering through grimly lit corridors and getting haunted by unseen terrors. The characters are hilarious though and the cast is really having fun. Rush is a gnarled hoot as the misanthropic tycoon, with a pencil moustache as precariously thin as his threshold for having tantrums. The lovely Janssen is saddled with a trashy role that’s beneath her classy talents but she’s game and makes this chick one seriously bratty, scene stealing bitch. Chris Kattan also shows up as like… the butler or caretaker of this place I guess? I had an acting teacher once tell us that every performance you give should be modelled after the physicality and essence of one member of the animal kingdom. Chris heard that and apparently decided to base every role for the rest of his career on a squirrel with a serious meth habit, because that’s what I felt like I was watching when he was onscreen. I can understand why this film doesn’t get a lot of love, it’s a remake of a no doubt cherished 60’s horror film and that coupled with its lack of a real story… I get it. However, I really enjoyed it for the set design and very freaky visual horror creations. I think that director Malone missed his calling as a full blown, thoroughbred surrealist like Lynch or Merhige because he has a real gift with abstract, otherworldly makeup, editing and FX. Some of the berserk visual stuff later is right out of a post modern video collage installation and reminded me of like Jacob’s Ladder or Eraserhead. If Malone put that talent to work in a project that would allow him to fully be taken seriously as a filmmaker he’d be the stuff of Lynchian legends. But hey, this film is super fun too, if kinda slight. Rush and his merry band of fellow cast-mates are great, and like I said it gets genuinely fucking weird right near the end, and weird is always good. Oh also, bonus points for using Marilyn Manson’s Sweet Dreams as a kind of theme song. Oh and also: this is like one in an unofficial trilogy with 13 Ghosts and Ghost Ship as early 2000’s ensemble piece gonzo horror with metal infused soundtracks, produced by the Dark Castle label, excessively opulent special effects and bad reputations, and I love all three to bits no matter what anyone says. 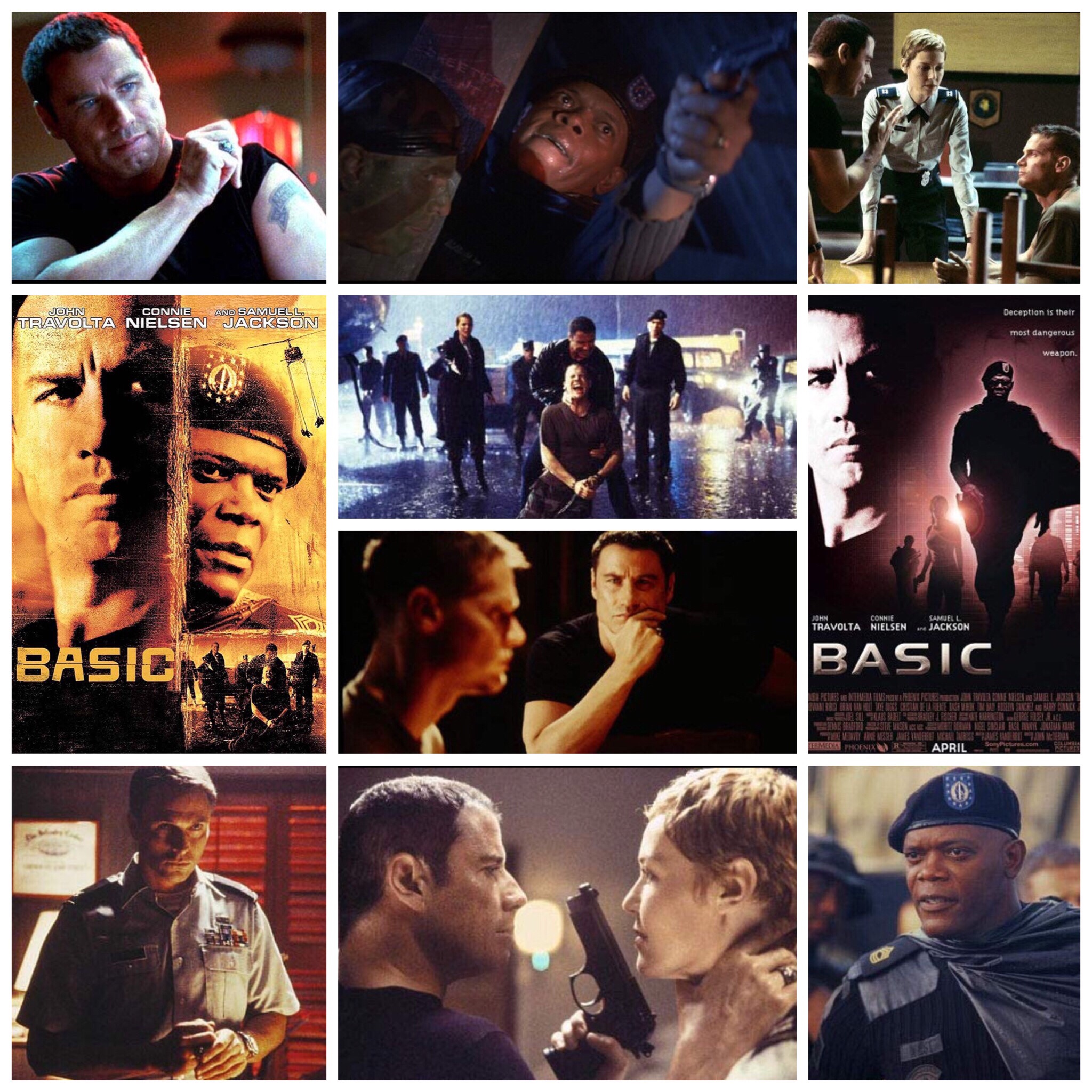 John McTiernan’s Basic is a film that commits the cardinal sin of cheating its audience with an obnoxious, horrendous twist ending that it neither earns nor properly makes sense of. It’s a real crying shame too, because the film up until then is a hell of a lot of fun and has a rambunctious John Travolta performance that could shake the cobwebs loose from a barn. When a near mythic drill instructor (a volcanic Samuel L. Jackson) with some terrifying over-the-line tactics disappears along with some of his cadets on a routine training exercise deep in the jungles of Panama, Travolta’s rowdy DEA Agent is called in to investigate. Why a DEA agent, you ask? Well, it being Panama one might assume that any controversy anywhere could be drug related, but the film states that it’s because no one is as skilled at interrogation than him. That proves to be true, as he slowly, cleverly speaks with the remaining trainees and starts to piece together a cluttered version of events from each one. They are played by the reliable likes of Dash Mihok, Taye Diggs, Giovanni Ribisi, Brian Van Holt and Harry Connick Jr., and as such many of the scenes are quite engaging. It doesn’t hurt that Connie Nielsen is good too as Travolta’s anal retentive, by the book partner. The film oscillates through various scenarios, teasing us with which mystery might be real, and when it comes time to whisk the curtains back and land the pirouette of a reasonable final act… it just… shits itself and completely ruins not only everything that came before, but the entire film, which is really too bad. At first I thought I was just too stoned to get what happened the first time years ago, but I’ve since rewatched it a few more times and… nope. It’s illogical, unwarranted horse shit that doesn’t work any way you spin it. I would have honestly preferred the central mystery to never even get solved over the half assed resolution they cooked up. Roger Ebert pointed out that this film deserves to be in a genre he calls the ‘Jerk Around Movie,’ and I agree. It shamefully wastes the viewer’s time with an ending that’s both insulting to the efforts of the actors who really worked hard here, betrays it’s own narrative to the grave. Bleh.