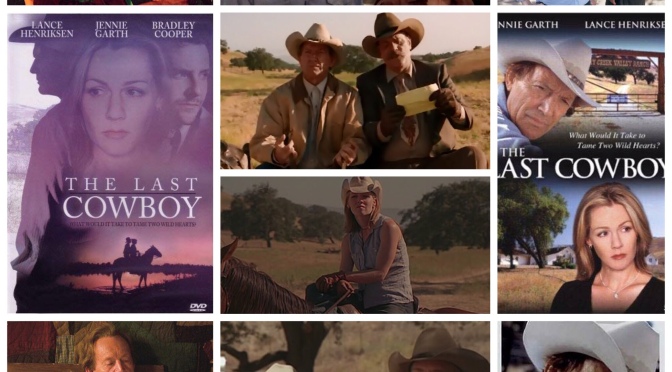 I’m a huge fan of the Hallmark style drama films, and anyone who scoffs at the inherent melodrama or perceived schmaltz is missing the point completely and deliberately robbing themselves of the therapeutic, diversional catharsis one can find in them. When you’re feeling shitty about the world, your problems or any other negativity, they can be a life affirming escape because they almost always are just small stories about kind people, families overcoming trouble or getting together for various holidays, just pleasant, earnest entertainment for entertainment’s sake, simplicity itself. Joyce Chopra’s The Last Cowboy is a fine example, and especially a treasure for the way it casts usually edgy, frequently villainous character actors in sympathetic, against type lead roles. The great Lance Henriksen is Will Cooper, a stubborn, salt of the earth old school rancher whose land is in danger of being seized by the bank. After his estranged daughter Jake (Jennie Garth) returns home with her young son after many years absence, it becomes clear that it’s up to her and Will to reconcile their differences, put the pain of the past behind them and work together to save the ranch before it’s too late. Henriksen is always a dynamic actor and imbues Jake with grit and grace, while Garth, who I haven’t seen in a single other thing, does a great job too. The real scene stealer is character actor M.C. Gainey as Amos, Will’s lovable farmhand, friend and confidante. This is a special role for him because he’s almost always found playing roughneck bikers, evil criminals or redneck truckers, but here he’s an honest to goodness decent human being and he just nails it. Bradley Cooper shows up as well in a more subdued role as a horse owner who brings business to Will and stirs Jake’s heart. This is a small, very low budget TV movie and has barely ever seen the light of day in terms of exposure (it took me like five years to track down a DVD), but it’s heartfelt, really well acted and if you’re a fan of anyone in this cast it’s a rare gem.