Dominik Starck is a cool guy who loves and makes movies. That’s a man I’m down for spending some time with – so I did. His new movie, The Hitman Agency, is a complex nest of intrigue, danger, action and redemption. Throw those altogether and you have a great blend that tastes a little like something we’ve had before – yet it’s flavored by Mr. Starck’s unashamed passion for his many cinematic influences as well as the sheer joy he has being a filmmaker.

Most of us, at one time or another, who make fatal decision to go off and pursue a career as an artist, are met with the inevitable speech for our parents which carries the immortal lines like, “You’ll never make any money,” or “Why don’t you get a real job.”

Now Dominik tried that – he tried to deny the fire inside, the voice telling him he wasn’t doing what he was meant to be doing. He wasn’t, as the Bard would say, to thy own self being true.  So he started doing what he had to do, and, for my money, what he does well – he started making movies.

“Making an indie film is close to being a hitman; choose your goal, aim and go after it no matter the obstacles. And like assassinations, it’s a hit and miss with movies. I consider our movie the latter but it’s up to the target audience to decide if that’s the truth or not,” says Starck, the writer/director. While the German independent production by Starck Entertainment and R.J. Nier Films is represented by distributor Generation X Group GmbH at the film market in Cannes (May 8th to 17th) for international sales, the US audience is the first to be able to watch THE HITMAN AGENCY on Amazon.com where it’s available for rent and buy. 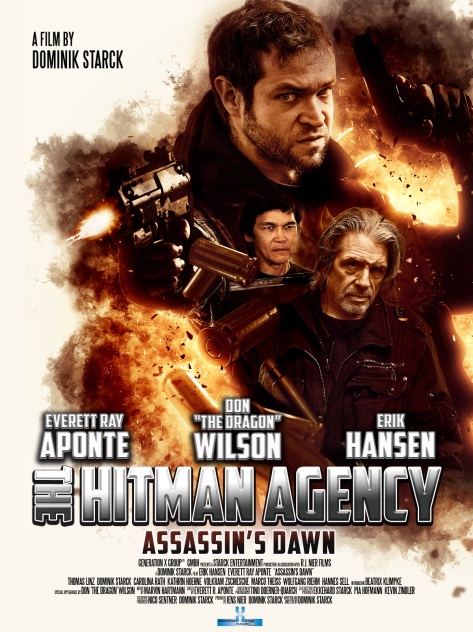 This movie is the directorial debut of writer/producer Dominik Starck who previously worked on the award winning mercenary action film ATOMIC EDEN, starring Blaxploitation legend Fred ‘The Hammer’ Williamson and Lorenzo Lamas (RENEGADE). While being a deliberately different type of movie, THE HITMAN AGENCY features a special appearance by 11 time kickboxing champion Don ‘The Dragon’ Wilson from BLOODFIST-fame. Starring American-born Erik Hansen (THE COUNTESS) and LA-based Everett Ray Aponte (ATOMIC EDEN) as competing hitmen from different ends of their assassin-careers, THE HITMAN AGENCY is a character-driven conspiracy-thriller with twists and turns, spiced with some martial arts outbreaks and assassinations. Shot on locations in Germany in English with more blood, sweat, and tears than a real budget, this underdog movie is proof to the phrase that nothing can stop you from making a movie when you really want it. Not even in Germany where there’s no platform for genre films at all.

Like I said at the top, Dominik is a cool guy and a cool filmmaker. He was worried about his English before we spoke but I tell you now as I told him then – “his English is as beautiful as his film-making.” Seek out THE HITMAN AGENCY… (follow the link below)

One thought on “THE ‘HIT’ MAN: An Interview with Dominik Starck by Kent Hill”